You know there’s a presidential election on when we talk about Barack Obama for two editorials in a row. The BBC, in typically confused style, is offering a comprehensive package of coverage for the race to the White House that once again completely outclasses its efforts for last year’s Scottish Parliament election – so it’s been hard to miss the Republican and Democrat National Conventions (America’s equivalent to our relatively tame party conferences) over the past two weeks.

In his speech accepting the Republican nomination, former Massachusetts governor and celebrated outsourcer Mitt Romney promised to be the ‘real hope and change’, sneering at President Obama’s failure to live up to his early hype. Obama responded with surprising restraint, treading a careful path between his old idealism and the more sober, serious realist that we saw at his inauguration in 2008. The hope is still there, went the message, but the change won’t be easy. His slogan for this election is the almost entirely meaningless ‘Forward’, which runs the risk of alienating precisely nobody, while he delivered his speech under a banner reading ‘Stronger Together’ that will have sent any Obamaniacs in the unionist camp into spasms of fanboy ecstasy.

These platitudes are typical of general elections on both sides of the Atlantic. The SNP’s ‘Be Part of Better’, or the rather obvious appeal of Labour’s ‘A Future Fair For All’ are reminders that there is an ever-expanding chunk of the English language that will forever be cross-partisan. The language used tends to be an ideological blank canvas, with flexible definitions that can be easily twisted to apply to policy platforms from left to right. For that reason, these slogans tend to be largely ignored by the public, but Obama’s 2008 message of ‘Hope and Change’, immortalised on graphic artist Shepard Fairey‘s iconic posters, seemed to genuinely resonate with the American public as they turned out in droves to elect him. 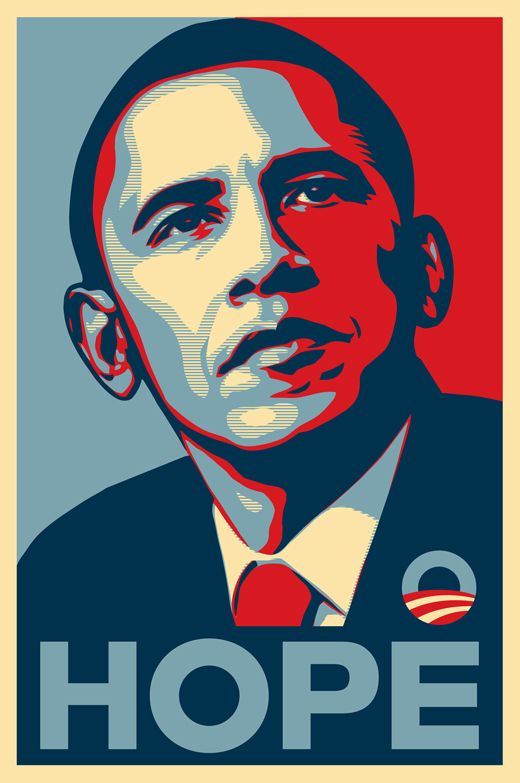 Perhaps there’s something special about these two words. They are, after all, slightly more specific, even risky, than words like ‘forward’, ‘better’ and ‘progress’, because they imply something less secure – ‘change’ – but cushion it in the positive notion of ‘hope’. And this is where their application in the independence debate is worth looking at. No matter what way you look at it, ‘Hope and Change’ just doesn’t work for both sides in the way that most political slogans do.

First, let’s look at ‘hope’ – it’s about positivity, optimism, imagination and the power of ambition. The No Campaign, ‘Better Together’, claims to offer a ‘positive case’ for the union, but the positivity of that case isn’t about saying things can be ‘better’ than they presently are – it’s just telling us that they’re ‘better’ than the alternative. The message is that it might not be great, and we might not be totally enamoured with the union, but things could only be worse with independence. Seen in such a way, it doesn’t seem very hopeful at all. David Torrance, one of unionism’s more constructive voices, dropped his usual thoughtful cynicism to offer his own Positive Case For The Union in a recent piece for ThinkScotland:

“Another unexpected feature of this summer’s events has been the rehabilitation of the Union Flag, something backed -up by recent opinion polling. Although never the negative symbol many Nationalists and those on the Left appeared to think it was (the so-called “Butcher’s Apron”), the enduring symbol of the 1801 Union between Great Britain and Ireland had nevertheless become a bit tired; a bit old hat.

“Now it’s flown without a whiff of self-consciousness at home (and I certainly noticed a change in this respect during a recent visit to Edinburgh) and continues to be a fashion icon abroad. Wherever I’ve been this summer – Cyprus, Lebanon, Georgia and Armenia – the Union Flag has been a ubiquitous presence on bags, T-shirts and even belt buckles. Sure, most of those displaying the flag probably did not intend to make a political point, but it implied – at the very least – a latent respect for the country to which it is inextricably linked.”

This is pretty telling about the No campaign’s ‘positive case’. Pro-independence campaigners offer an image of an independent Scotland that is more socially just, peaceful and environmentally responsible – and offer concrete policies to back it up, such as the ‘championing’ of the welfare state, the removal of trident and the use of oil revenue to fund renewable investment. Yes Scotland’s positivity is political, arguing that we can do better things with the powers of an independent state. Better Together’s positivity is forced to reside exclusively in the realm of emotion, arguing that it’s just nicer to be part of Britain because look at the pretty flag and didn’t we do well in the Olympics.

That’s not a message of ‘hope’, precisely because it cannot be a message of ‘change’. It is at best an image of safe, comfortable continuity. The problem is, that continuity isn’t safe or comfortable. In a short piece for us this week, James Maxwell outlined the problems with the British state in its present form: an unreformable and unrepresentative democracy, political elitism, a concentration of power in the south-east, a geographically unequal distribution of wealth and health, wasted natural resources and a “grotesquely inflated defence budget” that reflects the hypocrisy of Britain’s ‘liberal’ stance on the international stage.

To the politically engaged observer, these are top priorities, and are central to the case for independence. But there’s something else here, something that goes beyond political ideology and democratic accountability. Ultimately, people want to feel secure, and they want to feel like things are getting better  for themselves, their friends and their families. In the United Kingdom, and particularly in Scotland, that’s not what’s happening. In ‘Hopes and Fears’, a report by British Future (who are a fantastic resource for polling on British identities and sentiment), only 24% of Scottish respondents said they felt optimistic about the future – the lowest in Britain.

That’s why Better Together are trying to use the hope and change of independence to their advantage – emphasising ‘change’ as a dangerous risk to our economic stability (swiftly discredited by the conversion to independence of Scottish billionaire businessman Jim McColl), and crushing any ‘hope’ with those same fears. One of Ian Smart’s latest offerings – in which he claims insight to the inner workings of the No campaign – sums this strategy up rather nicely:

“Independence would mean mass unemployment at the Clyde shipyards. And at Faslane and Rosyth. And RBS will relocate to England (it will of course remain in the ownership of the British Government) as will Standard Life and indeed most of the rest of the Edinburgh financial services industry (for who would want to hold their investments, or their pension, in an unstable foreign country). Americans are highly unlikely to invest in, or even visit, a Country hostile to NATO and indeed all inward investment is likely to more or less come to an end. Worried about benefit cuts? At least you’re still getting benefits. It’s difficult to see how anything other than subsistence benefits could be paid against the background of the mass unemployment Independence would create. Receiving, or hoping to receive, a British State Pension or a public sector occupational pension? Hard lines. Working in the public sector? Only if there is money to pay your wages.”

It goes on like this for three or four paragraphs, but you get the drift. Those American political obsessives in the unionist campaign who delight in seeing their hero speaking of ‘hope and change’ under a ‘Stronger Together’ banner need to think about their own tactics and ask themselves: if our only possible strategy to win is based on sentimental flag-waving nationalism, economic insecurity, fear, and the promised absence of ‘change’ in a political and economic system which is clearly dysfunctional – the tactics of increasingly desperate right-wingers in both the US and the UK – are we really on the right side of this debate?

We’ve been talking about power a lot recently on the pages of National Collective, so it seems appropriate for an editorial with more lengthy quotes than usual to end on this, from ‘Power: A Radical View’ by the political scientist Steven Lukes:

“Is it not the supreme and most insidious exercise of power to prevent people, to whatever degree, from having grievances by shaping their perceptions, cognitions and preferences in such a way that they accept their role in the existing order of things, either because they can see or imagine no alternative to it, or because they value it as divinely ordained and beneficial?” 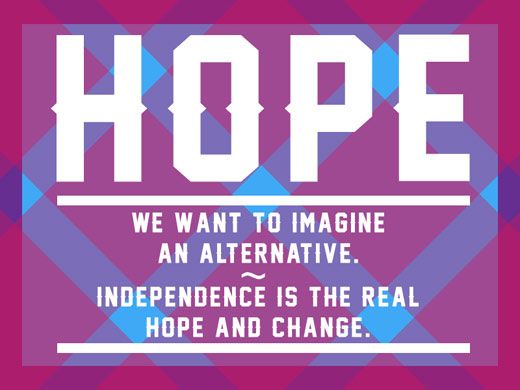