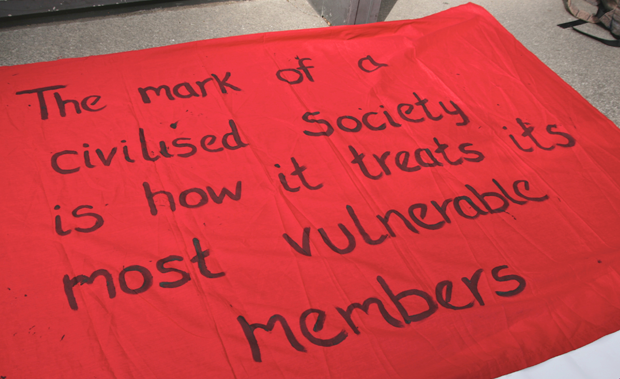 How do we live with ourselves when we read stories like that about Mark and Helen Mullins? People like these two poor souls are amongst the most vulnerable people we have in the country and yet we have a benefit system that plunges them into the worst sort of poverty. Lack of food, lack of warmth and lack of care. You can cope with a lot if there is food on the table and a fire in the grate but these poor people had neither of those things. And the UK Government and the media would have us believe that people like these are ‘scroungers’, ‘lazy’ and not worth anything.

See, I can’t bear this. I can’t sit and read these stories online or in the papers and think that it is acceptable. I can’t stand the fact that people who are often seriously ill or incapable are so worried that they are suicidal. Calls to the Samaritans are on the rise and those calling about financial problems has increased from one-in-ten to one-in-five.  Food banks are springing up all over the country because people can’t afford to live.  This couple had £57 per week to live on.  This was to be used to pay their council tax, pay their electricity, pay their gas, buy their food, cook their food, heat their water, and – oh let’s not forget – do their job search! Now, I can make a meal out of almost nothing but I wouldn’t be able to cope with that. They had to walk twelve miles for a bag of food and then they had ration it out to feed themselves. The woman’s daughter was even taken into care because she wasn’t able to look after her. Did anyone stop to wonder whether she could look after herself?

Then there is Danny Shurmer who was informed he was fit for work and his benefits stopped the day after having a double heart bypass operation.

Then there is the man who had mobility problems but was still ordered to attend a jobcentre to fill in the form.  He couldn’t get into the jobcentre but was told he could fill the form out in the car. He died in his car, filling out the form.

Then there is Ruth Anim who attended an assessment and was paid so much attention that the assessor marked her down as a male client.

We can find story after story of cruel, ridiculous and tragic decisions being made as a result of the work of ATOS. There are reports that many people have died soon after being found fit for work, although its hard to be sure about the figures – some say as many as 32 people have died each week. We know that disability benefits have the lowest level of fraud of any benefit at just 0.5%, according to the DWPs own estimates, and yet we still on the message boards and facebook pages rally with the cries of “get these lazy bastard’s back to work”. The Telegraph blogger Brendan O’Neil even sneered at the efforts of anti–reform campaigners in June saying “… campaigners approach working-class and less well-off communities through the politics of pity”.

‘Pity politics’? There is nothing pitying about wanting to change things for those powerless or isolated in society. It isn’t ‘pity politics’ – it is responsible politics. Responsible politics means that a government takes responsibility for all its citizens, especially those who struggle to take care of themselves. By changing our attitudes to people who are in need of benefits we can offer hope, remove barriers and ultimately empower people to take control of their lives. A change of attitude to welfare – offering good support and real help to get into work, the change of focus in the economy onto growth and jobs will go a long way to doing that. Well thought out and integrated policies on social welfare, growth and jobs will change society and offer hope and real achievement to people struggling to find their way just now.

We are told by politicians that Scotland is ‘chronically dependent’ on welfare. Scottish Conservative Party Leader Ruth Davidson implied that Scotland is a nation of ‘scroungers‘ and Iain Duncan Smith told us that Independence is never going to work because we can’t afford the welfare bill. Independence has to work, precisely because of the cost of welfare.  That is not the financial cost – eye watering though it might be – to be honest, the financial cost is of secondary importance.

The cost of welfare is really in the effect on the lives of the young, old and the vulnerable. The cost is seen in human life – the people who live invisible, miserable lives with no hope. Invisible because we don’t see them and we don’t hear them.  How many of you watched the recent Ross Kemp documentary which was set in Glasgow?  For those of you who didn’t there was a woman living under an overpass – Ross Kemp walked out from her “home”  (which had recently been torched by some people looking for someone else who owed them money ) and right there – right there – her next door neighbours were affluent, attractive, expensive apartments. How many of the people living there knew she was their neighbour, drove past, walked past and saw her?  I would be surprised if it was any of them.

Don’t get me wrong, I don’t blame people for having money and for doing well. I would like a bit more of it myself,  but there is something fundamentally wrong in a country where two vulnerable people can’t afford to eat, and where someone lives under an underpass.

This is where we are today. We cannot solve these issues with the status quo – part of a union which does not allow Scots to spend our own money on our own priorities and which limits borrowing and tax raising powers.  To have the power to change things, we need to have an Independent Scotland.  The current Westmister Government shows no intention of altering its welfare reform plans – indeed they intend to make a further £10 billion in cuts as they deceive people into thinking that the economy requires these savings, when actually they are driving the cuts to fulfil their own ideological agenda for a smaller welfare state. Would a Labour Westminster government change things – I doubt it. Once upon a time, I was a Labour voter. I now have very little faith in their commitment to any socialist agenda and serious doubts over their ability to win the next election. With a Yes vote we have the power to change the society we live in.

Let’s imagine that we changed the focus of the £150 million being spent on ATOS and appeals against the decisions its advisors make, and then used it to help people back to work. Because that is how much ATOS has cost us so far. Let’s imagine that the people doing the helping were not private companies answerable to shareholders and paying big bonuses to their senior staff, but charities and public servants – homeless charities, addiction support charities, mental health charities who care about their service users and who are offered a programme they can believe in and which pays them properly. Let’s imagine that DWP staff were still calling the people that use their services ‘customers’ and striving for excellence in customer service – many offices used to be Chartermark holders. Let’s imagine that we had robust clinical judgements made about people by objective assessors who’s remit was to be fair and not simply to get people off benefits whatever the personal cost. Let’s imagine that we had a UK Government who focused on growth and jobs, recognising the particular issues that affect Scotland’s poor.

Is this a step too far? Aye, I thought so. Possible? Not as it stands just now.

Now imagine that we had an Independent Scotland. The impossible suddenly becomes the possible. Whether it happens or not is up to us. Our votes will decide what sort of help or support the poor and vulnerable receive. We get to choose and we get to vote for a Scottish Government who will address the issues that are of most importance to Scottish voters.

For me, it will be social welfare and social reform that helps me to decide where to place my vote and I know many others think the same way.

Pro-union supporters sneer at those who would vote for an Independent Scotland because of a desire for change as if it is somehow a less intellectual or a less valid reason. They fail to understand that the decision to vote for change – to vote Yes to Independence –  is not that it would be the end of a process, but the beginning.

If we vote Yes we can remove ourselves from the shackles of the Union, with its Barnett formula and hints (but never promises) of extra powers for the Scottish Parliament. Most importantly, it would break us free from the cycle of dependency and hopelessness; of poverty and anguish; of joblessness and isolation – this is the real Union dividend and the reason why the status quo is simply not good enough.

The desire to change things for the better is fundamental in making any society grow and improve. Without a desire for change then nothing happens. If Scots desire true change then we as a nation have to be brave and choose to stand on our own two feet. We have a way to make change happen and it is up to us to exercise our democratic right to create a better, fairer and more equal society. Yes, it will take time, effort and imagination – all things that are lacking in the current Westminster Government. But Scotland’s Referendum provides a once in a life time opportunity for us to change Scotland’s future for the better. Please, don’t let this rare opportunity pass us by.