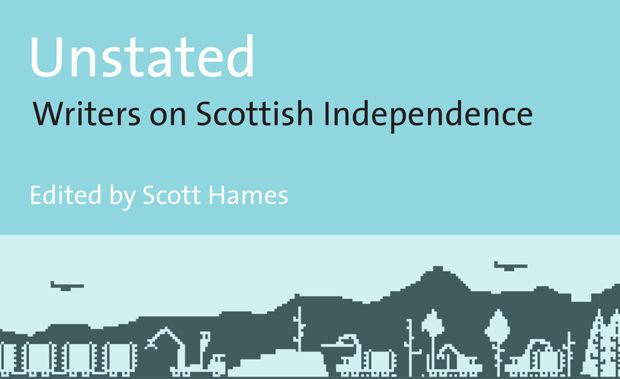 From Burns to MacDiarmid, Scottish writers have never been shy of politics. So far the debate on independence has looked to politicians for their wisdom and vision. But more often than not it’s the artists and the writers in society who more accurately reflect the public mood.

We caught up with Scott Hames to talk about his new book, Unstated: Writers on Scottish Independence, which maps out the views of some of Scotland’s best-known writers, including Alasdair Gray, Janice Galloway, James Kelman, and National Collective’s very own Cultural Ambassador, Alan Bissett.

What inspired you to write this book?

Curiosity, mainly. You often hear that Scottish literature ‘paved the way’ for devolution in the 80s and 90s, and I wondered what current writers would say about independence if they had a bit of space and could set their own parameters. (That is, without fear of being shoehorned or ‘storied’ into someone else’s agenda.) I also had a hunch the official debate (the one controlled by pollsters and strategists) would be limiting in various ways, and shrink away from any serious or critical thinking about ‘culture’.”

Were there any surprises?

Lots. Writers I expected to be gung-ho were actually quite sceptical, and vice versa. But most of the surprises are to do with why writers take the positions they do, and how their thinking differs from the rhetoric we’re getting in the newspapers. Nobody devoted their essay to how great/terrible it would be if independence meant gaining or losing £500. Many essays approach the question from ‘first principles’, cutting through the what-if fantasies and nightmares. Others are focused on specific issues, e.g. holes in the logic of left-nationalism, what’s gone wrong with Scottish masculinity, the difference between ‘settlers’ and ‘colonists’ managing the Scottish arts. The writers were quite brave, sticking their necks out without knowing what each other were saying.”

If the book was an opinion poll, what would it show?

It’s tempting to tally things up, but the book isn’t really about the writers’ voting intentions. One aim of the book is to resist the tactical narrowing and gaming of the debate. And that means not corralling the writers into ‘Yes’ and ‘No’ pens where they can be easily contained and assimilated by the official campaigns, or made to symbolise political positions far less radical and imaginative than their art. (Which is a bugbear of my academic work, and another motivation for this project.)”

In the run-up to 2014 do you imagine writers becoming more explicit in their politics?

That will be interesting to see. I suspect both campaigns are keeping their cultural powder dry, waiting for the final stretch before they make their cases on emotive, ‘identity’ grounds. Writers, musicians and other artists may become more prominent at that time, but probably as mascots of Scottishness rather than serious thinkers, which is a shame.

“I keep wondering how this debate will be understood decades from now, and how writers will be seen within it. A few months back David Cameron began his pitch for the Union by citing Walter Scott and Robert Louis Stevenson. Both had complex attachments to Scottish nationality (Stevenson famously hated receiving letters marked ‘North Britain’), but the No campaign seemed to get away with this simplification. Is that how current writers will be discussed, and co-opted, in arguments happening a century from now?”

Unstated: Writers on Scottish Independence is released this month and is available from Word Power Books for £12.99. The book, edited by Scott Hames, will be launched at a free event on Monday the 17th of December in Edinburgh.