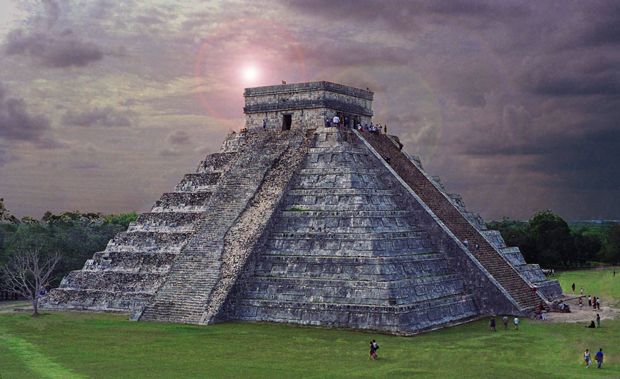 According to reports, Alex Salmond has been accused of being a ‘horseman of the apocalypse’ and offending the Maya people over his constant references to the Scottish independence referendum in 2014.

Opposition ministers labelled Mr Salmond “disrespectful” after a representative of the Maya visited Holyrood just days before the end of the world, widely expected to occur by the weekend.

Tomorrow sees the end of the Maya calendar’s long-count period, an event which is predicted to lead to widespread disaster and, in some form, the end of civilisation. The Scottish Government meanwhile continues with its plans to stage a referendum on independence in the autumn of 2014. Opposition members have claimed that if the planet were to survive, it would in fact be independence that would cause armageddon for Scotland.

The Maya people are a collection of seven million Native Americans who are highly respected and who contribute massively to cultural life in Mexico and Central America. When their notable leaders visit Scotland we should show them that respect by toning down the rhetoric of Scotland somehow managing to survive the apocalypse at the end of the month.

“Alex Salmond is embarrasing Scotland with his constant jibes at the Maya over the 2014 referendum. No other political figure looks that far ahead anyway. The First Minister is trying to make the rest of us look like a bunch of ‘careerists’ that spend each day just trying to hang onto our jobs in any way possible.

“If the planet Earth manages survive this impeding armageddon, we all know that it will be Scottish independence that would be the next apocalyptic event for Scotland. Only a ‘No’ vote would protect the jobs of Westminster Parliaments brightest minds. I mean, really, what would we do without them?”

A statement from Downing Street said:

Salmond is all over the place on this issue. These are the sort of spats that cause wars, yet if Scotland were independent they wouldn’t have the weapons to go and deal with the situation in a proper manner. If upsetting an entire race doesn’t prove that Scotland is better remaining in the United Kingdom, we don’t know what does.”

The UK Government’s Scottish Secretary Michael Moore responded to the news just a week after his return from Canada and the US, where he was doing his job by telling everyone how great Scotland is.

The First Minister has put his foot in it again with his utter contempt for anybody outside Scotland. He’s trying to pull the country out of the UK, out of Europe, and now isolate us from yet more groups. The Maya must be taken seriously. I spent a good three minutes on the internet last night and the only place not backing the end of the world is the NASA website. And they’ve been sat on their backsides and haven’t even attempted to step on another world since 1972, so they’re not exactly relevant.

“The last time Salmond went to America he was booed heavily. You didn’t hear anyone booing me last week.

The Maya representative visiting Holyrood was a routine visit and nothing to do with independence or the end of the world. Michael Moore seems to think the Maya were over here promoting the death of civilisation, when in fact it was him going over to the United States promoting the death of Scotland to millions of people by saying that we’re too wee, too poor and too stupid to make our own decisions.

“If Moore really thought this was an issue then he should have held off signing the Edinburgh Agreement until after December 21st. If we wake up the next day and find us all still here, well then… we’ll know we’re not dead. And as Health Minister, that would be just dandy with me.”