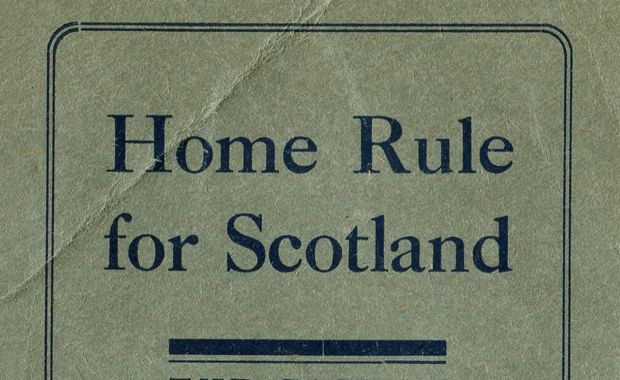 They say you can’t be a Labour politician and a supporter of Scottish independence, but my great great grandfather was both.

I found a little blue book in a dusty cupboard last year. It’s very old, and quite tatty but it’s now one of my favourite possessions. The book – I say book, it’s more like a pamphlet – is called Home Rule for Scotland: The Case in 90 Points, and was printed by the Scottish Home Rule Association in 1922.

The book is forwarded and partly written by my great great grandfather, James Barr, who was a Labour Member of Parliament for Motherwell from 1924 to 1931, and then for Coatbridge from 1935 to 1945. The Labour Party of that era was not the staunch party of Union that is it today, and my great great grandfather was one of the earliest campaigners for Scottish Home Rule. Despite his party allegiances he was an advocate of Scottish independence and saw the Home Rule movement in Scotland as part of a broader, more global self-determination movement running parallel to the demise of the British Empire. In one speech to the House of Commons in 1927, he demanded the restoration of “the right that we have to the independent Parliament”, then recited the Burns poem Such a Parcel of Rogues in a Nation and added: “Our whole literature pulsates with the passion for Scottish freedom and Scottish nationality”. As a writer I have always liked that line.

What I want to share with you are some extracts from Home Rule for Scotland: The Case in 90 Points. The case for Home Rule in this era is made with reference to our national culture, heritage, the arts, poetry and literature.  It is old-fashioned Scottish nationalism, certainly, but I believe there is still something valuable and wonderful in that which we can learn from. You will find how frequently the word “freedom” is used in this 1922 pamphlet. Do not be fooled into thinking a Scottish obsession with freedom is a post-Braveheart phenomenon; it isn’t. It’s a very old, very real thread that has run through every age of our collective story. My only hope is that today’s campaign takes note, and isn’t consumed entirely by talk about money. There is so much more to talk about, and we shouldn’t be afraid of it.

Few countries can boast, as Scotland can, of scenery so distinctive, of traditions so noble, of monuments so illustrious, of national possessions so rich. Our country abounds in scenes of matchless beauty and imposing grandeur. Her heroism and her romance have made much of her soil enchanted ground.  Her olden ages live again in the pages of her great writers, and in the minds and hearts of her people. Her story is one of continual struggle towards better things; of the passion for freedom bequeathed from sire to son, from age to age; of great achievements wrought, and ever fresh stages of advancement won, in the onward, upward march of a great people’s progress.

We are but setting the songs of Burns to their proper tunes, and planting his “Tree of Liberty” amidst the ruins of our old castles and on the sites of our own old Bastilles.

New homes have to be built for the people; a new Temperance Act forged, equal and just in its voting power, thorough in its provisions, and effective in enforcing the popular will, in eradicating the national stain, and in lifting the national sorrow. And, beyond and through all, there must be the uplift of the common people to a nobler lot and a higher destiny; the winning for the workers of the control of their own industries, of a just share in the product of their own toil, and an equal inheritance with all men in the priceless and incalculable possessions of our people.

Extracts from ‘The Case in 90 Points’

Point 4: National Freedom for Scotland. The Great War has produced fundamental changes in the structure of the British Empire. The great over-seas Dominions signed the Peace Treaty with Germany as separate nations, and have been granted separate representation on the Assembly of the League of Nations. General Smuts, one of the most constructive and far-seeing statesmen of the Empire, has declared that the British Empire came to an end in 1914. The process of transformation is still incomplete, but will be carried one stage further when Ireland takes her place in the counsels of the British Commonwealth of Nations as a free, self-governing people. But even then the work of transforming the Empire in the spirit of the new age will not be finished. Scotland cannot then, remain contented with her present standing in the Empire. She also is a nation entitled to FULL NATIONAL RECOGNITION. 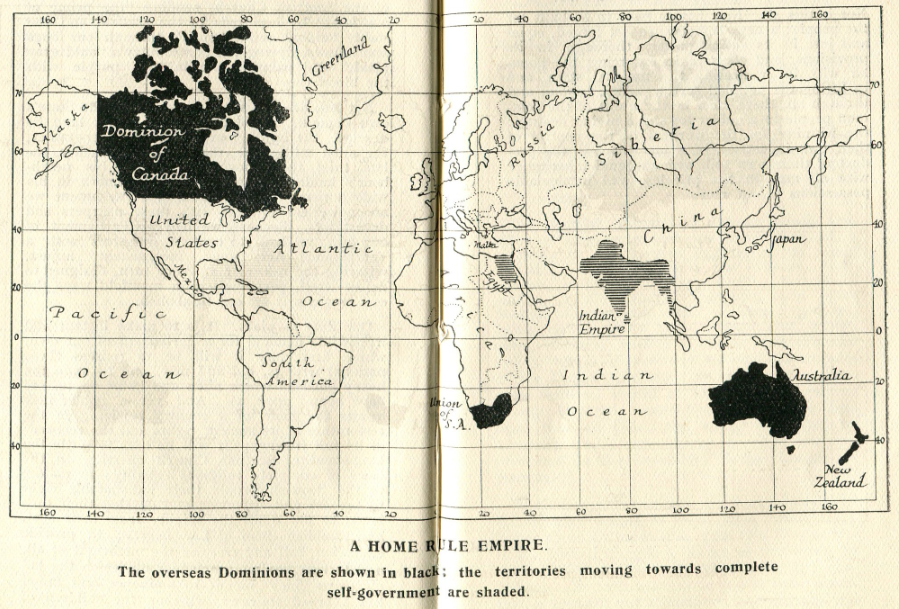 “The overseas Dominions are shown in black; the territories moving towards complete self-government are shaded.”

Point 20: Small Nations. During the War the Allies had as one of their battle-cries the rights and freedom of small nations. Mere bigness is not greatness, and a small nation with a free, healthy national life can do more for the higher development of the world than many a large state. The one thing that a small nation cannot do is to disturb the world’s peace by adventures in jingo imperialism; that is the dangerous prerogative of the larger states.

Point 22: The Safeguard of Scottish Patriotism. Mere pride in the past is not the whole of patriotism. If that were all, Scottish patriotism might degenerate into sentimentalism and mere antiquarianism; it might become a soul without a body, a disembodied national spirit. It will live as a power in the world for good if the national identity is preserved and strengthened by complete national self-government. Patriotism should mean more than the occasional blowing-off of steam; it should utilise the steam to do effective national work in the world. Political nationalism will give body to the nationalism of the mind and spirit, and will ensure its continuance in the most effective way. Proud of our national past, we are called upon to hand on its great heritage to the future, not only unimpaired, but enlarged; and to do so we must recover for Scotland her full political autonomy and selfhood.

Point 33: Home Rule and Democracy. The government of each nation by itself, for itself, in fellowship with all nations – that is true democracy.

Point 90: Under the existing system, Scotland is a decaying, even A DYING NATION. Let Scotsmen demand the power to build up for themselves, on their own national soil, in full freedom and responsibility, a just and noble social life worthy of the best thought and aspirations of their forefathers. “Only upon the soil of a nation,” said Louis Kossuth, “can a nation’s redemption be worked out.”

Be Scotsmen still to Scotsmen true.
Amang oursels united!
For never but by Scottish hands
Maun Scottish wrangs be righted!

In 9 years, this book will be a century old. For the rest of the world the Home Rule cause was won long ago. British Dominions have all but vanished into a community independent states. In 2014, history will be on our side.