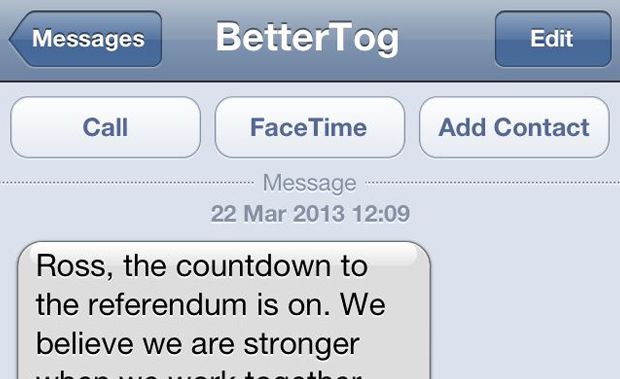 What is BetterTog? And why are they texting me? This was a recurring theme in our studio yesterday and one, based on my Twitter and Facebook feeds, which appeared to infiltrate much of Scotland.

I know exactly who “Better Together” are and what they aim to do over the course of the next 500 or so days, however others do not, so lets look at this cold.

Firstly, they know my name. Safe to assume then that we have perhaps had some sort of interaction before. (We have not.)

Then they say the “countdown to the referendum is on”, that must be because Alex Salmond has stopped “keeping people in the dark” and the Unionist parties have made him U-Turn into giving away the date. (They did not want a referendum and they did not make him announce the date.)

“We believe we are stronger when we work together.” This is a particularly vague statement, but very leading and agreeable. (I, like many others, do think its better when people act in the interests of the many and not the few.)

“What do you think? Vote in our mobile poll.” A link to a page online takes us to a choice. Following consideration of a delightful video of a young man offering me “separation” from friends and family or devolution in a “strong and secure” UK, delivered by Donald Dewar who’s statue is elegantly placed in the background. I’m offered two options, neither of which will feature on the referendum ballot and a big red button asking me to submit my answer.

Do you want the political parties which attempted to introduce ID cards, want to revoke the laws of the ECHR and adopt “secret trials” in courts knowing your name, telephone number and how you intend to vote?

This unsolicited contact to garner participation in what may appears to be a reasonable piece of polling is a cynical attempt by the “No” campaign to harvest vast swathes of information. Garve Scott-Lodge has already questioned the legality and security implications involved in this unsolicited contact from “Better Together” and found the requisite information amongst the minefield of clauses on the Information Commissioners Office website.

“Better Together” hailed yesterdays bombardment into the personal sphere of many men, women and teens in Scotland as an “innovative new way of political campaigning”. However, we believe it is cynical, dangerous and unwelcome (Check the Storify below for further proof). If like us you received an unwanted text message yesterday contact the Information Commissioners Office and the Electoral Commission and show “Better Together” that you do not want Big Brother watching.