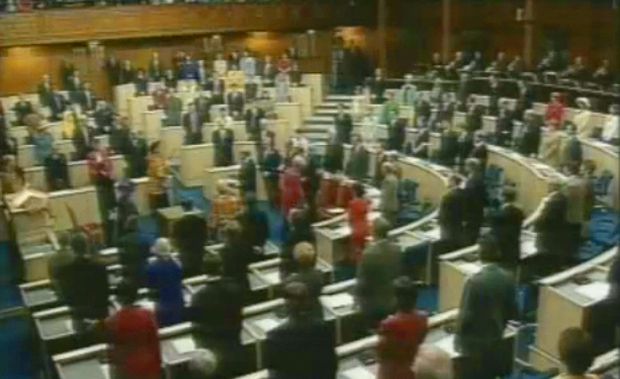 The only Scotland I have ever known is one which makes its own decisions.

I was three years old when the people of Scotland voted for their own Parliament. Like the vast majority of Scots under the age of twenty-five, I can’t remember a time before devolution. For our generation, self-government is the norm.

It seems almost silly to think that within my lifetime, campaigners had to convince Scots of the case for a Scottish Parliament, and yet as a campaigner for independence the case they made is all too familiar:

We believe that when you make decisions in Scotland that address Scotland’s needs and reflect Scotland’s circumstances, as well as taking account of the needs and concerns of the diverse communities that make up Scotland, there will be better decisions.”

These words, which one might think were lifted from a Yes Scotland campaign leaflet, were spoken not by a Nationalist but by Jim Wallace, then leader of the Scottish Liberal Democrats, during a 1997 televised debate in which he argued for home rule. As a leading proponent of devolution, Wallace confidently batted away fears that self-government would mean disaster for Scotland’s economy. Today, ennobled as Baron Wallace of Tankerness, he is the Coalition’s Advocate General for Scotland, charged with the onerous tasks of inventing new ways to decry “uncertainty” at every turn in Scotland’s referendum debate and popping up in The Scotsman every month or so to issue dire “warnings” about our prospects should we vote Yes.

Wallace’s belief in 1997 that moving decision-making to Scotland would result in policies better suited to the interests and priorities of the people who live here has been borne out. Devolution has been a demonstrably positive experience for Scotland.

With full responsibility for a wide range of key policy areas, the people of Scotland have been able to elect governments to make choices which reflect their vision for society, while those parts of the UK where control over these matters still resides with Westminster have taken a very different route. For my generation, the contrast between the two Governments with which we have grown up has been stark.

While Scotland has chosen to abolish tuition fees, basing the right to a university education on the ability to learn and not the ability to pay, Westminster has tripled the cost of a degree to a crippling £9,000 a year.

While Scotland has protected the NHS, Westminster has introduced privatisation measures which threaten to undermine the principle of universal healthcare.

While Scotland has legislated to give everyone living here the right to a home, in a bid to eradicate homelessness, the UK remains the fourth most unequal society in the developed world.

These are the achievements of not just one party, but of successive Scottish administrations. Scotland has made a success of governing itself, and in doing so has set out on a different path from Westminster.

However, it is increasingly clear that as long as Westminster continues to control economic, foreign and defence policy for the UK as whole, we will see the adoption of measures which do not carry majority support in Scotland. Without full independence, the Scottish Parliament has been powerless to prevent the renewal of Trident, tax cuts for the rich, welfare cuts for the poor – all opposed by a majority of Scots and their parliamentary representatives.

If devolution was designed to insulate Scotland from unwelcome and hostile Westminster policies, then despite its successes, it clearly isn’t fit for purpose.

Better Together like to characterise the independence debate as a choice between devolution and “separation”. Devolution, they illustrate with a snazzy road sign graphic, is a progressive journey, while independence would mean the end of the road for Scotland.

But if devolution is a journey, then surely it has a destination? This generation take for granted the idea that Scotland should govern itself. Devolution has created a new political space supported by its own institutions, creating a sense of a distinct Scottish society establishing the reality of a separate Scottish polity. The Scottish Parliament, regardless of which party is in power, is trusted by a far greater proportion of Scots to act in Scotland’s best interests than Westminster.

For me, when reflecting upon our governance, it seems anomalous that Scotland be managed by an institution dominated by a political, social and economic agenda which is often irreconcilable with the democratically expressed will of the Scottish people, especially when the experience of devolution allows us a direct comparison of Westminster rule and self-rule.

In their attempt to divert attention away from this observation and persuade voters to reject independence, Better Together employ two main tactics. The first – to frighten Scots away from the idea by accentuating absolute worst case scenarios and, for want of a better term, talking Scotland’s prospects down – will be familiar to former devolution campaigners.

The scare stories we hear today about how independence would lead to economic catastrophe are the same ‘arguments’ that were used against devolution. But our strong financial position and our success in ruling our own affairs has proved anti-devolutionists wrong, and the people of Scotland, with our vast resources, talents and skills, will prove the opponents of independence wrong too.

Recognising the majority support for enhanced self-governance, their second tactic is to pledge further devolution, with all Better Together parties now on board (in rhetoric at least) the ‘more powers’ train. There is, however, no sign of consensus over what these powers might be or what difference they might make in practical terms.  Scottish voters, polling suggests, don’t buy their promises.

When discussing the possibility of transferring new competencies to Holyrood, the anti-independence parties urge Scots to consider to what ends we seek further devolution. “Powers for a Purpose” has become the new mantra of Scottish Labour.

And yet they seem to have forgotten the purpose of devolution itself, content to let the power over social security and taxation remain in the hands of those who seem intent on dismantling the welfare state. In championing devolution as the status quo but resolutely insisting upon continued participation in a political and economic Union skewed against Scotland’s interests, they are guilty of committing exactly the same sin as they accuse Yes campaigners of when they brand them as blindly pursuing a “separation obsession” regardless of the consequences.

The YES-YES case of 1997 is virtually identical to the Yes Scotland case of today; that Scotland’s future should be in Scotland’s hands. The only difference in 2013 between those former devolution campaigners who have joined Better Together and those who advocate independence is that only the latter recognise that mere devolution can’t help the woman forced to choose between eating and heating; the man facing cuts to his Disability Living Allowance and subjected to humiliating ‘fitness to work’ assessments; the young family struggling thanks to the Bedroom Tax.

Devolutionists have much to be proud of in achieving a Scottish Parliament. But for those members of Better Together who oppose increasingly disagreeable Westminster policies, what was the point of devolution? If Scotland can still have policies it vehemently opposes imposed upon it, what was it all for?