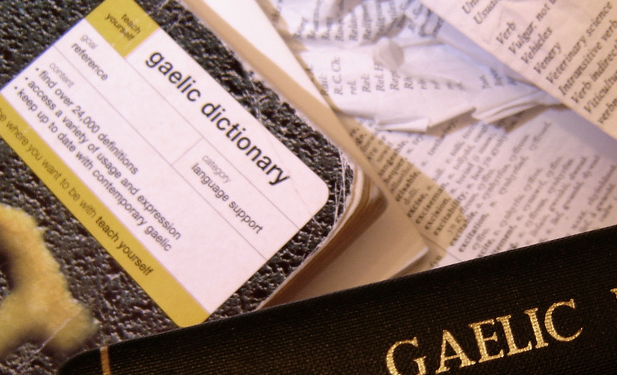 I was aware of the petition for a bilingual English-Gaelic ballot paper a while ago. A bit bloody embarrassed it had got to that stage really. As a Yes supporter, someone who’s campaigned for a referendum his entire adult life, you find yourself thinking about the bureaucracy of government, about officials not taking a step back and looking at the broader picture. Ministers are busy folk, their officials too, and it was not going to be top of the agenda I hear myself saying. But, ironically enough, it is language and its misuse that has constructed little by little a concrete argument for a bilingual ballot paper.

It is worthwhile reminding ourselves why Gaelic’s been excluded in the first place. I say excluded as Gaelic is slowly regaining a place in Scottish public life and affairs. Much to the consternation of visiting academics wanting to talk about grand schemes of nation building and strengthening national identity, this increase has resulted from a genuine cross party movement, with popular support. Blue, Red and Yellow all played a part. Visit the parliament, or get a letter from your MSP, and there will be Gaelic in evidence somewhere. It is monolingualism, as seen in the proposed ballot paper, that is a substantial backwards leap to the nineteenth century.

On that very topic, back in 1872 the Education Act provided that all children in Scotland should be educated in English. This allowed no provision for Gaelic education, and indeed Gaelic-medium Education was not initiated in Scotland for over a century. The effects of that Act on Gaelic and Scots have been debated, analysed and discussed at great length elsewhere, though are hardly common knowledge. In effect it meant that virtually every child born, say, from the late 1860s was taught to read English.

Fast forward to 2012, and you have some poor native Gaelic speaker being tested to see whether he could understand “Should Scotland be an independent country?” I hope he was at least paid for participating in the Electoral Commission’s research: the risks of pulmonary failure from the excessive laughter must have been grave. It is the equivalent of travelling to the colonies and asking the chaps, with appropriate gesture, whether they do indeed speak the English – native indeed. The conclusion is, of course, “The gentleman understands, let it all be in English.” The more sinister aspect to this main line of argument is that it is the same of argument used to deny any support or recognition to Gaelic or other minority languages across the world.

The other primary thrust of the monolingual argument, it appears, is that the precedent is set from the 1997 devolution referendum. This is argued in the correspondence of Scottish Government officials to Arthur Cormack. With all the coverage in recent days of the newly enfranchised 16 and 17 year old voters that particular fig-leaf seems to be, likewise, indecently insufficient.

The outcry hasn’t been particularly great amongst Gaels. There has been a small but steady push for the bilingual paper led by Cormack amongst others. Some of this reticence may be down to folk not wanting to rock the M.V. Independence on what will doubtless be a long, tough crossing. But I think a deeper point is that post-devolution, post-Gaelic Language Act it shouldn’t be an issue at all. Gaelic is legally an official language of Scotland, commanding equal respect with English. Don’t blame me, I didn’t vote through the legislation. But it is. The ballot paper issue is similar to many which crop up in Scottish public life on a periodic basis as far as the language is concerned – issues which the Gaelic Act and the subsequent language plans were really supposed to take care of.

You could probably find some fairly blunt, reactionary reasons for Gaelic not to be on the paper: it being a missed opportunity to increase spending on potholes, being the most spectacular one I heard recently. Plenty of fairly basic misunderstandings have been coming from the lips of representatives of all parties too. But all that aside, in terms of the preceding arguments, I haven’t set the terms of this debate; the Electoral Commission and Scottish Government officials have. And Gaels are used to working with what’s to hand.

Of course, our parliamentarians may decide that the Gaelic Language Act 2005 is flexible enough to shrug off the demand for a bilingual paper. Indeed many suggest a rights-based approach to the Act was avoided for that purpose; to allow enough shoogle room for such occasions. That may be so, but then we would have to admit that our parliament failed just about every challenge Edwin Morgan set it when he wrote:

So, dear friends, I hope you do pay due heed to the petition before you. And sign it.