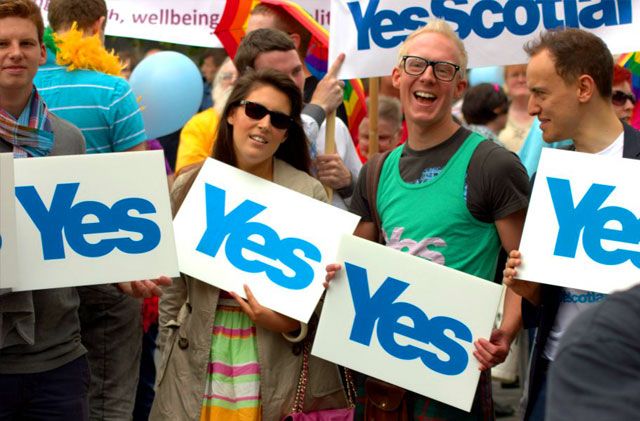 Next to the seismic shift in our society’s attitudes towards lesbian, gay, bisexual and transgendered (LGBT) people, the short step Scotland needs to take to independence almost seems small by comparison. The acceptance of what was seen as criminal until a few years before I was born has been a journey. The true goal for LGBT rights is to live in a society that is open and accepting, where all are free to be who they are. Equal marriage alone does not deliver that, but without equal marriage that goal will never be reached. Likewise independence alone does not deliver the progressive, prosperous Scotland, but without it that bright vision will never be made real.

Linking the constitution and the equal marriage debate may be controversial. There has certainly been no shortage of threats from those opposed to equal marriage, claiming that the bill makes them less likely to support independence. It is an odd argument when the UK Government are themselves introducing equal marriage, and at the same time happily leading the charge for a No vote.

The bill however highlights the practical problems with the current devolution arrangements. To legislate for same-sex marriage, the Scottish Government had to secure agreement from their UK counterparts for a change to the Equality Act. Somewhat disconcertingly given their patchy record on human rights, the equal rights protections of all minorities in Scotland remain reserved to Westminster to be decided by them and them alone.

This is well-known, but only the start. The accompanying documents to the bill list eight areas where consequential changes have to happen in reserved responsibilities, chiefly immigration and social security. If this leads you to ask whether Scotland could have gone it alone on same-sex marriage, the answer would be no. Indeed, in 2009 the answer was no. The Scottish Government, having received a public petition for equal marriage through Parliament, contacted the UK Government and were told the change was not one they supported. The supposed lions of LGBT equality in Labour shut the door to the idea, the party of Section 28 swept in and opened it. We are truly through the looking glass.

In the past LGBT campaigns were cool on the Scottish Parliament having greater responsibility for civil rights. The events around the abolition of Section 28 did not help. A myth has however sprung up of a golden age of democracy and progressivism at Westminster. This is an odd way to describe a Parliament whose gears groan from pomp, pretension and privilege, while an invariably right-wing media-political complex sit in the driving seat. In truth the myth does not hold up to examination. The equal age of consent, the right to serve in the armed forces, and the protection from signs in shops saying ‘No Gays Allowed’ were all handed down to the UK from Europe. To this day the UK’s treatment of those who come here fleeing homophobic persecution abroad is woeful.

The UK Government did introduce civil partnerships, but did so at a time when support for same-sex marriage had – certainly at least in Scotland – already overtaken opposition, albeit by a narrow margin (39% support, 35% oppose, 21% no opinion, 4% don’t know). The half-baked compromise of civil partnership was a short-term win for equality but has probably been a setback towards full marriage rights over the longer-term, since it has given every opponent of equality a line of attack to question why we would even want marriage.

We should also remember that Scotland itself was responsible for rights to adopt and putting hate crimes on to statute. On these issues our nation’s leaders have moved largely as one, with backbench dissent spread across the four main parties and restricted to very much a minority opinion. Nicola Sturgeon set a precedent of leadership in 2008, becoming the first Minister of any Scottish administration to attend a Pride event in their official capacity.

Looking beyond our shores, the Yes campaign’s Scandophilia provides a telling example: Denmark. The first nation in modern times to enshrine same-sex unions in law, Denmark did so in 1989 – tellingly a matter of months after the UK enacted Section 28 and gave hate a home in the statute book. In the past the world looked to Scotland for their ideas of civilisation, now Scotland looks to Scandinavia for our ideas of progress, and rightly so.

So what would being LGBT be like in an independent Scotland? The progress that has taken place in Scotland has been repeated in many countries, and will continue to be driven forward after independence. Let us not however sell ourselves short for what we have achieved by our own efforts, nor give credit where all may not be due to others at Westminster. We must recognise too that everyone who is LGBT is also a citizen of this land and stands to benefit from a wealthier, fairer, greener nation.

If there is one distinct perspective however it stems from that journey that LGBT people have taken collectively – and in many or most cases in our own individual lives too – towards self-expression and self-realisation. This should inform our thoughts on the status of our nation. Do we continue to hide our potential and conform to what others are pressing us to do, or do we as a nation stand up and finally be ourselves? Next September the question will be put, and it will be time for Scotland to come out of the closet.