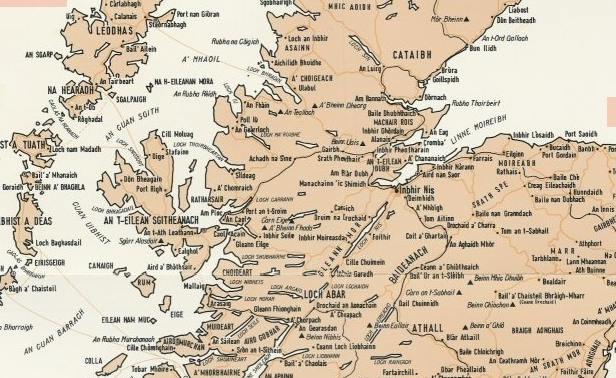 My name is Dòmhnall Iain Dòmhnallach and English is my second language.

In other words I am a native Gàidhlig speaker and what keeps me awake at night is not the results of the next referendum poll, but the dread I feel about the release of the 2011 census data. In the last century, the number of Gàidhlig speakers declined from nearly a quarter of a million in 1901 to less than 60,000 in 2001 – half clinging onto the west coast and the rest scattered throughout Scotland’s cities. This month saw the announcement of the news that Bòrd na Gàidhlig had achieved only 6% of its Five Year Plan to double the number of children in Gàidhlig Medium Education (GME) by 2017. There are not enough young Gaels to replace the old who are, to put it bluntly, driving in their droves. The language is being culled by the passage of time.

Am I being too despondent? A recent Herald editorial cites the wholly GME secondary and primary schools in Glasgow, Edinburgh and Inverness as a way to halt the trend, while Bòrd na Gàidhlig claims more teachers need simply be trained. However, having grown up in the Western Isles, I believe that GME has just created a new Highland Line between the urban Gaels and those left behind in the islands. In Glasgow and Inverness, GME is available to S6 but, in the Western Isles it ceases abruptly at 12. Gàidhlig is relegated to an optional school subject, on par with French. In the islands, primary school children are more likely to speak Gàidhlig comfortably and casually, yet they go to schools where Gàidhlig is but a “unit” within a school whose dominant tongue in English. And it is always English. The young Gaels of today must accommodate those children whose parents weren’t wise enough to take advantage of a bilingual education.

Because Gaels must always defer. It is a fact of life. No better example of this was the callous dismissal of demands for a Gàidhlig translation of the referendum question, as described by Aonghais MacLeoid at National Collective. That the Gaels, who created the first Kingdom of Scotland, should be denied the right to create the second using their own language taints the claims of Scottish nationalism to be inclusive. This happened despite the 2005 Gaelic Language Act which gave Gàidhlig back its rightful place in public life and parity of esteem with English. Though tabloids and Caithness Councillors have been quick to dismiss Gàidhlig signs on roads and in the parliament as mere tokenism, official recognition provides the means and confidence to fight for the language’s survival. Should Scotland become independent, it is only right that Gàidhlig (along with Scots) be written into the constitution as official languages of Scotland, on equal standing to English.

But ultimately I do not believe that the future of Gàidhlig post-referendum lies with more official recognition, more enclaves in Edinburgh, more programs on BBC Alba. I believe that the future of Gàidhlig is in the hands of the island communities who speak it naturally. Some years ago the activist Finlay MacLeod campaigned for the setting up of a Gàidhlig-only village near Inverness, to create a “social space” for GME pupils to use their language outside of school. Although Arthur Cormack of Bòrd na Gàidhlig criticized him for promoting Gàidhlig “ghettoes,” MacLeod was right to argue that, even with state-support in media and education, Gàidhlig cannot survive without a concentrated speaker base. MacLeod, however, missed the point. There is still a Gàidhealtachd extant – those islands at the edge of nowhere, those dots behind the weatherman’s head, the Western Isles, where Gàidhlig is still a living community language.

And here is where I part company with those who advocate purely linguistic initiatives to save Gàidhlig. Yes, to correct the two-tier GME system, a Gàidhlig secondary school should be set up in Lewis and, more radically, Gàidhlig should be the universal language of study in every Hebridean primary. But, here’s the key point, if the survival of Gaidhlig depends on the survival of the Gaels of the Western Isles, then the decline in population of these islands must be thwarted, skilled jobs must be created and the economy improved. Murdoch’s The Sun should never have cause to write sensationalist articles about alcoholism and unemployment in the isles again.

That is why I find the Our Islands – Our Future campaign so exciting. It is an organic campaign, sprung from the three island local authorities of Scotland, NOT, as some might argue, a unionist ploy to discredit independence. The group is holding a conference in September to further crystallize its policies. Its current demands for greater island autonomy are eminently sensible, and should occur, whether independence happens or not:

The recent forced designation of the seabed round Barra as a Special Area of Conservation against the wishes of the local community (as shown by the protracted SHAMED campaign) is a stark illustration of why islanders desperately need the political macho to resist mainland-based meddling. As an independence supporter, I believe strongly that an independent Scotland should not be a colonialist nation. If Scotland’s raw wealth is to be based on the riches of the seabed surrounding these three archipelagos (whether oil, wave and wind power or fisheries), then a truly socially-democratic Scotland must give the islands it exploits the right to benefit economically from their own resources. Brian Wilson wrote in his Scotsman obituary that the late, great Father Calum MacLellan of Eriskay dreamt of creating “a wee Gaelic Empire” in the west. In the 70s Father Calum was instrumental in creating Comhairle nan Eilean Siar from the two ill-served island fiefdoms of the landlord-dominated Ross and Cromarty Council and Inverness Council. We should regard his words as a challenge – as the new Scotland is independent within Europe, then so the isles should be independent within Scotland.

In the daydreams of this particular radical Gael, we would take land reform to its logical extent. My conversion to radical politics came as a child when I realised I lived in a feudal estate – though thankfully no longer, after the South Uist Estates community buyout. But recent revelations about the huge public subsidy the few private landowners who own most of Scotland receive show the process of land reform is not over yet. Though I know it would never happen, an independent Scotland founded on the principles of social justice in both its rural as well as urban areas, would enshrine in its founding the nationalisation and then localisation of control of the chartless swathes of this country still controlled by parasitic landlords. Is it stupid to dream of a Western Isles owned and controlled by the people that live there? Of a semi-autonomous Gàidhlig-speaking Hebrides? In 1900, it would have been considered stupid to dream of an independent Scotland.

Kay Matheson, who passed recently, was the only woman in the band of nationalist students who returned the Stone of Destiny to Scotland in 1950. She was also a Gàidhlig-speaker. The truth is that Gaels have been integral to the independence movement since its inception. The great Gàidhlig poets and bards of the last century – Somhairle MacGill-eain, Ruaraidh MacThòmais, Dòmhnall Ruadh Phàislig – were overwhelmingly nationalist. Gàidhlig IS the literary and musical culture of independent Scotland, free of the shadow of Anglo-Saxon dominance. In this age of independence, let us save Gàidhlig by giving Gaeldom control of its own destiny.

It is a matter of pride to some that Scottish nationalism is entirely civic and open to all forms of Scottish identity. It is about democracy, not patriotism. But that is an easy thing to say when your Lowland Scottish culture is not moribund, not dying by the day. It is Gaidhlig, with its distinctive Celtic culture, which makes Scotland not-English. Gàidhlig stops us being an arbitrary nation for without it we will remain North Britain forever. It is no coincidence that the Gàidhlig word for Lowlander is the same as that for foreigner – if Scotland does not take seriously its duty to save Gàidhlig, the Gaels and the islands where they live, then this country, whether independent or not, will remain forever foreign to me.