The building bears down on you. As you make your way through the grand iron gates and follow the thick outer wall up and round the building slowly comes into view; first the single turret then the battlements, then the bold square shapes of the building itself, the step-like centre section looking particularly ominous with it’s three large institutional windows. Inside, the space is partitioned up into small cells, corridors and larger circular rooms but the space is a labyrinthian mass of doors and rooms. Is this really the best place for an exhibition? You might wonder. Exhibition spaces are usually wider, lengthier affairs – warehouses, galleries, abandoned supermarkets – open, large with high ceilings and lengths of wall. The Old Town Jail doesn’t have that kind of space, but when we consider the content of the exhibition it works perfectly… 1NE4OURZERO2014 is an exhibition of political, personal and creative statements that have been hand-screen printed as poster-prints by Richie Cumming, Paul McDonald and other artists. The textual content of the posters was sourced through social media (particularly Twitter) and are individual responses to the question ‘what might a post-referendum Scotland look like?’, other statements meditate on the state of the debate so far, current cultural and social feelings in Scotland and jostle the viewer’s own thoughts and assumptions concerning the topic. I was particularly pleased by the absence of names and titles on the pieces themselves; without any way of identifying the authors of each of the statements you are encouraged to think heavily on the words themselves, the position of the author in society. The part they play, the sector they inhabit; whether artist, CEO, cleaner or author is inconsequential, it’s about the words on the page and how you interpret and understand them.

Whilst placing these works in a larger, more spacious location would certainly do them no harm conceptually, I think the use of the Old Town Jail and the way in which the works have been displayed and allocated space is particularly thought provoking. Consider ‘Stockholm Syndrome’.

Isolated in one of the original cells at the far end of the exhibition space through a narrow door, the floor dusted with the history of distorted inmates, ‘Stockholm Syndrome’ takes on a sinister edge. Huddled in the corner like a wounded animal we might stand and muse on the authors intentions. Does Scotland suffer from Stockholm Syndrome? How and what do we think about the claim that Scotland suffers from a certain negative energy, a ‘cannae do’ attitude? Yet the statement is also bathed in a warm yellow light that reveals its presence in the room, it’s highlighted, understood, accepted perhaps? As I walked through the corridors and poked inside the other rooms to view the other isolated statements I found myself thinking about the prisoners that would have been kept here in the past. Murderers, rapists but also dissenters; those with radical views. Political prisoners too. People who had their own views and takes on society around them, locked away for years in crude cells and now, in the present, their cells are occupied by statements themselves – radical concepts, visions, ideas and statements locked away behind closed doors whilst outside in the corridors equally radical (but socially accepted) concepts sip at warm tea and discuss what they’re going to do this evening… The launch itself was a success of music, poetry, conversation, block-printing and singing, the odd angles of the jail creating some interesting acoustics as you walked through each room. Light noise, no noise, loud music – in the punishment room visitors printed their own contributions and hung them from the ceiling as End of Neil‘s guitar strums drifted in from the corridor. In one of the larger rooms a projectors had been set up looping a video of the printing process against the far wall. Set away from the corridor, people gathered here to discuss their views on the statements they had seen and discussed their own views surrounding the referendum next year.

I spent most of my evening talking with Greg Moodie about various topics; the arts industry, journalism, National Collective, independence and politics, decentralisation, representation… surrounded by the views of others seemed to encourage us to share our own, to discuss and debate rather than argue or bicker. I wandered back into the punishment room later to find a wealth of contributions dangling from the wall (so many, in fact, that someone had strung up some extra string on the opposing side where a couple more sheets hung).

Wounded Knee appeared on stage and I watched from the walls, musing on the months that had gone by – from my spontaneous decision to move from East Anglia to Scotland, to my application for the internship with the SCVO, the struggle with benefit claims (and having the carpet pulled from under my feet which, without the financial benefit of the internship, would have forced me back home), tonew friends and new stories, new places and new wanderings, to now, standing in an exhibition I (and many others) had been organising for many, many months. 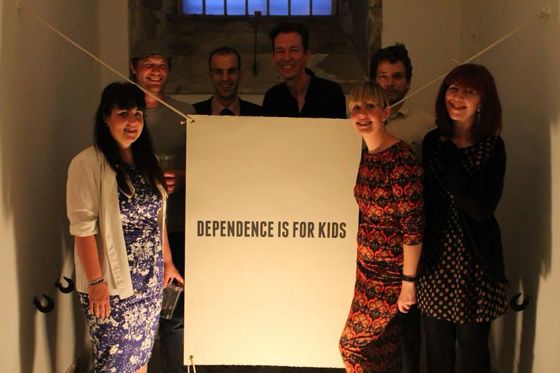 The exhibition will be running until the 14th September, so pop in if you have the chance – it’s a brilliant install in an intriguing location. Print your own contribution, get chatting to folk. Engage.