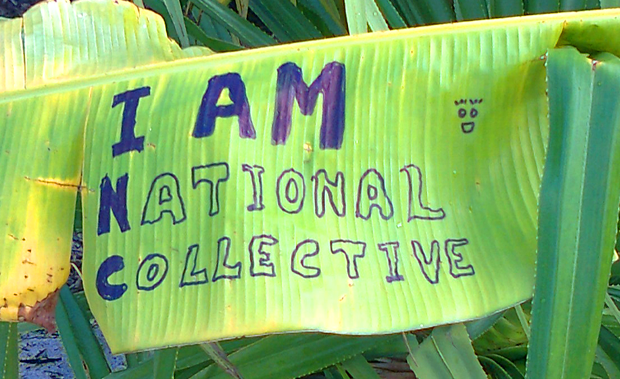 Recently I took a bunch of words, threw them together and out came an article concerning Science’s engagement, or its lack thereof, with the referendum debate. National Collective then got an email from a Dr Michael White, operating out of the Northern Cook Islands in the South Pacific. A well-travelled Marine Zoologist, he offered me his thoughts on what Scottish independence meant to him. As an actual scientist, not a veritable apprentice like myself, I was fascinated to hear his perspective on the whole thing, from a far flung-corner of the world and from a different discipline altogether. I asked him what he thought about the independence debate, and why he thought independence could better Scotland and its scientific community.

I can assure you that some of us are avid supporters of Scottish Independence. Scientists are as diverse as in most other walks of life. Some spend all their time in a laboratory focused on minutiae or nano realms. Others ponder theoretical concepts from the comfort of their study, rarely entering a laboratory. Still others spend all their days and nights doing fieldwork, in often remote, mosquito-filled, parts of the world. The common thing for most of us is passion.”

So how do I feel about Yes to an Independent Scotland compared with Better Together? The differences are intriguing and profound. Let’s begin by using some science. The Yes movement has carefully explained the known facts by examining published accounts and reports, using maths and evidence supplied by interviewees, and good old common sense. Take Scottish oil for example. The likely reserves are considered, also the testimony of professional oil workers, the infrastructure investment by various stakeholders, and the best information available from seismology, petrology, and geosciences. Obviously we cannot be certain, but we’ve presented our best case for the viability of North Sea oil, and have also identified the uncertainties. So it seems good.”

“So, using oil again: Better Together states or insinuates that North Sea oil has almost all gone, and even if it hasn’t then it soon will, and even if there is some left then it will be too difficult and expensive to extract it, and an Independent Scotland would also be too small and poor to be able to manage such a phenomenal task anyhow. But if Scotland remains part of the Union then of course Westminster can look forwards to many happy decades of oil revenues and taxation. So which is it? Is there really some oil left and Westminster just doesn’t want Alba to have it, or is it really almost depleted? I surmise that if the latter were true then Better Together and Co. would not have used it as an argument. So from a scientific perspective: whether Scotland is Independent or within the British Union the oil reserves are exactly the same.”

Dr White then went on to discuss the environment.

Scotland is blessed with a stunning environment and abundant natural resources ~ this is our true national treasure. My own research over the decades has led me to conclude that many ecological problems are caused by human overpopulation, and I’m not really talking about the overall number of people on our planet, but rather local population density (how many folk are jammed into a given area). Consider the highlands compared with southeastern England. The former is sparsely populated, water is readily available, the air is clean, and wild animals are still abundant. [In the latter] fresh water is much scarcer, sewage and rubbish disposal are major concerns, and the cities do not grow food. The air is very polluted and poor health is of great concern. Could science, unfettered by politics, resolve these issues? Yes.”

“Good science considers every aspect of a problem. If you omit some aspect than it will continue to impact upon what you are trying to solve.”

He discussed how we tackle these issues – overpopulation, pollution, etc. The more he went into it, the more radical his suggestions –

change it all. Use electric vehicles and bicycles in the city limits, have free car-parks on the outskirts and frequent connecting buses to the city-centre: match the transportation system to meet the peoples’ needs, not the other way round. If there is a waterway (river or canal) integrate it -have passenger-boats and goods deliveries; often supermarkets are near waterways. Aim for zero or very low emissions. Plant trees and flowers to fix the carbon. Promote rooftop gardens and vegetable plots, create allotments and grow food.”

We were essentially talking about a complete overhaul in every aspect of our lives. An environmental utopia

Is there really a need to go to work anymore? Think how many people shop online, or use call-centres, or conduct research using the internet: we have moved a very long way from the old mills, factories and ship-building yards. Many manufacturing processes are automated – why not automate the rest? If we are honest with ourselves: how many things do we continue to do, just because we’ve always done them like that? Do we need to work five days a week? Could two people do the same job on different days? Given that we now have the opportunity to completely change Scotland: isn’t it a perfect time to throw out all those things that no longer serve us? Save energy, reduce pollution, minimise public health issues and create a society that works for all.”

It certainly was an interesting thought. In creating a new nation, with a new Government and a new constitution, we have a unique opportunity to revolutionise our entire society. The reason things like renewables are expensive is not because the technology itself is necessarily expensive or inefficient – it’s because the technology is still very much embryonic. Once things like Nuclear Fusion (where vast amounts of energy are created essentially using just the air, and literally the only by-product is steam) are perfected, energy generation becomes trivial. Once 3D printing and nanotechnology are perfected, medicine is revolutionised. Cancer could be treated, and cured, quickly, successfully, and most of all, cheaply. Bones could be regrown, diseases wiped out by machines operating at a cellular level. Manufacturing becomes as simple as entering a blueprint into a machine and hitting Start. With independence, we would have the opportunity to plough money into developing such revolutionary technology and reap the full rewards when it comes to fruition. For example, for every $1 invested by the US government in the Human Genome Project, $178 dollars were produced in the American economy. So to see Westminster freeze the science budget until 2015, essentially amounting to a 13% cut in real terms, is particularly painful given the economic benefits scientific investment brings. To put it in perspective,  Westminster’s science budget is half of its foreign aid budget.

It all sounds like science fiction – and unless we back up our scientists with money, talented students and world-class facilities, these technologies will remain so. Scotland already has the students and the facilities, but we have a Government in Westminster which has halved its investment in renewables since it came to power,  and continues to encumber our most talented and passionate minds with the shackles of life-long debts. We need to be encouraging people like Dr White to stay here in Scotland and help us realise these dreams – unfortunately, Scotland’s history is one where we are all too keen on flying the nest. Such is the beauty of making a new nation, though – we can write a new chapter where our brightest and best want to stay at home and Scotland beckons a second Scottish Enlightenment. As Dr White puts it,

Scotland needs its Independence next September. So many things have gone wrong in our world that it requires a fresh start to fix them; think of it like a gigantic Hogmanay. Each New Year we have an opportunity to take positive aspects from our lives into the future, and a chance to leave any negative aspects behind. We make resolutions and hope to keep them, but we each know the story: good intents fall by the wayside; we slip back into old ways, maybe just because they are easier. Perhaps the British Union once-upon-a-time was a good thing. A union of equals? That is no longer true and in Scotland’s case we see we cannot even get the government nor the policies we vote for because of top-heavy arrangements in Westminster; Cymru has the same issues: we are dictated to. The English regions are not well cared for by Westminster either: the needs of southeastern England dominate London’s Parliamentary affairs, but the needs and concerns of the rest of Great Britain are very different from that one small, densely-populated corner. Even to restore democracy in these isles, let alone a fair and equitable society that works for all of us, requires a huge change in our mindset. What once was is no longer. We also have to change in order for our planet Earth to survive. Business as usual will fail us. We have a keystone event along our road to a better future next September 18th: let’s use it wisely and say: Yes to an Independent Scotland.”