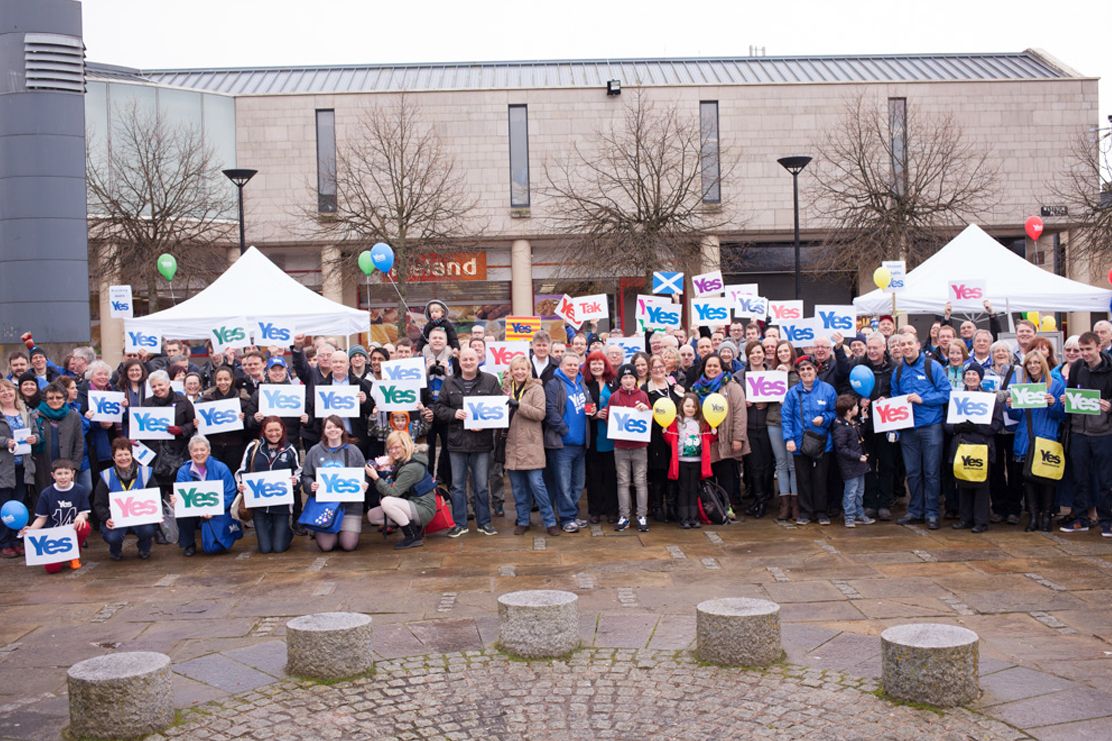 Right from the launch of Yes Scotland, almost two years ago, we knew our best chance of winning the referendum was to create the biggest grassroots movement in Scotland’s history. With only a few months to go, we are well on our way to achieving that aim, with an increasingly vibrant and diverse Yes movement in place and in action.

The core concept behind our social campaign is the idea of ‘conversion through conversation’, with our enthusiastic and informed volunteers and supporters becoming the primary advocates and ambassadors for a Yes. Each one holding a series of conversations with people in their social networks, breaking the issues around independence into manageable, bite sized chunks and then nudging people up the support scale from unconvinced or undecided to a clear Yes.

Our focus on engaging through people’s existing social networks, both on and off line, poses a real challenge to a No campaign whose dominance is solely in the traditional arenas of the Westminster parliament and establishment and elements of the old media, in particular the London based media.

Our belief is that out of the three communications channels – old media, social media and face-to-face – we will be well ahead in two of the three (social and face to face). So, never mind the headlines in some newspapers – the balance of those will give a false impression of what is actually going on – because Yes victories are taking place on a daily basis on dozens of Scottish doorsteps and around dining tables and in public meetings across the country.

There is no need for overnight conversions. The strategy is based on the belief that our volunteers will have three, five or even ten conversations about independence with people in their immediate circles between now and voting day. That means they can tackle people’s concerns issue by issue and can also provide very clear information about the benefits of a Yes vote, personalised to, and meaningful for, the individual they are talking too.

Alongside the overarching messages we deliver at a national level, we have real confidence that our volunteers and supporters, armed with the arguments, will make the best and most persuasive presentation of the case for the person they are engaging with face to face. We also know that what a person hears from a friend, colleague or family member is trusted way more than what they hear on the news, from a politician, or read in the newspapers.

Given our strength in numbers, this translates into our biggest advantage. Our aim, as part of building the groundswell, has been to ensure just one or two degrees of separation between an advocate for Yes and each and every undecided voter, so that there is that personal connection in place to supplement what is being heard in the wider national debate.

One of our most important tasks, centrally, is to provide our volunteers with the information they need to make the case and to do it in a format that is easily accessible and easily conveyed. We understand from our research that the primary barrier to a Yes vote is the misplaced idea that Scotland can’t actually afford to be independent and once this is overcome it is much easier to persuade someone that Scotland should be independent. This, therefore, gives us the structure for our presentation of the case: can, should and must.

Our volunteers have become increasingly adept at conveying the most appropriate can, should and must arguments and this three-pronged presentation of the case is also eminently understandable from a voter perspective and easily absorbed.

Alongside active conversations, there’s also a high level of engagement in other ways. As Professor James Mitchell of Edinburgh University has pointed out, we are seeing the return of the public meeting in a way that hasn’t been experienced for generations. For Yes, we have a public meeting in a different corner of the country most nights, with big turn outs – as many as 400 on occasion – and lots of questions, not about the supposed headline issues of currency or the EU but about what a Yes might mean for the things people care about in their day to day lives.

There is an enormous diversity of meeting styles, from Yes Cafes, where the chat is at small tables over coffee and cake, to the more formalised ‘Imagine Scotland’ tour, where some of Scotland’s best creative talent has been involved, designing a two hour programme of discussion and participation for undecided voters. There have been Q&As, traditional panel debates, head-to-heads and chat show style interviews and they are taking place in villages, towns and cities in all parts of Scotland.

One important finding in our research is that people who describe themselves as well informed about the referendum and independence are more likely to vote Yes and over the months we’ve seen a steady increase in the number of people who feel they know enough. We see this too at our public meetings, where the opportunity to think about the issues, and be part of debate and discussion, plays a big part in moving people from undecided to Yes. People leave the meetings, hopefully with their questions answered, and then they go back into their own social circles and share their experience, which in itself has a powerful, additional effect.

Our public meetings also tend to involve people representing the many different and varied parts of the Yes movement. So a Yes Scotland speaker will sit alongside someone from Labour for Independence or Business for Scotland or Women for Independence. This diversity of voices has also proved to be a big asset for the campaign.

The various Yes-supporting organisations have, largely, been self-starting and this has been another crucial part of building momentum and the groundswell of support. Alongside the Yes Scotland campaign and the Yes political parties, we have vibrant and growing groups – bringing different voices and perspectives. Once again, these different groups are able to speak to people within their particular environment, in the most appropriate way, about the issues that matter most.

Among the most exciting and effective is National Collective, with 2,000 members in the creative sector, many in their 20s and 30s. There’s the Radical Independence Convention, representing a wide range of the Scottish left, which is working in particular to engage with the “missing million” – people who haven’t voted for years or indeed have never voted – often living in peripheral housing schemes. Business for Scotland now has around 1,500 members across Scotland’s business community and has its own programme of business engagement meetings. Alongside these are numerous others: Women for Independence, Scots Asians for Yes, Labour for Independence, Yes Trade Unionists, Christians for Independence, Farmers for Yes and Academics for Yes to name just a few of 25 so-called sectoral groups and independent organisations.

In the aftermath of the referendum there will be much that deserves further analysis and study. From a purely constitutional perspective we are already hearing talk of the ‘Scottish model’. The Scottish independence movement has always been peaceful and democratic, it is also a civic movement and one that positions 21st century independence in a plural and inter-connected world: what is sought is not separation but a new, more modern partnership on these isles. Alongside this new model of co-operative independence, the agreement reached between the UK and Scottish governments to hold the referendum, which included confirmation that both sides would accept and implement the result, provides a new global standard and one that has been referred to already in relation to events in the Crimea.

But there is another aspect to the Scottish model that deserves particular attention. As a civic movement, the case for Yes is made by groups and individuals representing all parts of society. There are many voices speaking with every conceivable accent. This is, by definition, an inclusive approach and a truly networked campaign. And so, alongside the constitutional lessons, there is also a clear campaigning conclusion: in Scotland’s case success is most likely when society is fully engaged and moves forward together and this is a hugely powerful thought, and example, for areas of constitutional dispute across the globe.