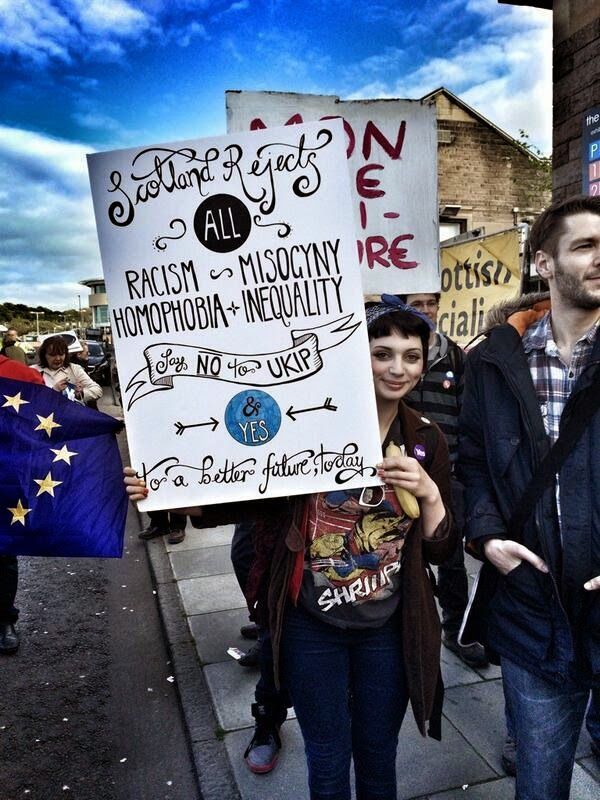 If you were to happen to stumble into a newsagents in Barcelona this week you might find a newspaper which listed the ‘extreme nationalists’ who were expected to make an impact in the upcoming European elections. At the top of this list – ahead of fascist Marine Le Pen of the French National Front and Islamophobic Geert Wilders of the Dutch Party for Freedom – was one Nigel Farage.

Sometimes it takes an outside view to put things in perspective. While Farage was thankfully skewered by LBC host James O’Brien this week on his hostility to immigrants and use of expenses, UKIP have risen from fringe status largely due to an excess of media attention. Presenting themselves as an alternative to the political class, UKIP have gained support from those disenchanted with a political system that is run by, and for, the elites. The fact that Farage is as much a part of the political elite as anyone else, and stands on a platform at odds with the interests of ordinary people, hardly seems to matter.

We in Scotland have an alternative. While there are likely a variety of reasons UKIP have not made inroads in Scotland to the extent they have elsewhere, this is probably at least part due to the fact that we have a viable alternative to the Westminster system. We’re as scunnered with British politics as our friends in England are. We’re not likely to lend a protest vote to a racist party in our droves this month because we can parachute out of the system full stop.

Of course, it’s not enough to seek independence and abandon our friends, family and colleagues elsewhere in the UK to a politics driven by division and hatred. The referendum in September is an opportunity to transform our small corner of the world. Afterwards we must find a way to work beyond our shores to defeat the politics of hatred that Farage represents.

But the rise of UKIP raises an important question for progressives in Scotland who see a No vote as a vote for solidarity.

And here lies the nub of the issue for the No campaign. Two years into the long campaign, Better Together and the UK Government are almost constantly criticised for their negativity. It must be frustrating for a campaign that tries to appear positive – to the extent of unsubtly choosing the word ‘Positive’ as a facebook cover photo at one point. The problem is that promising a better future only works when people can relate to and understand the promise being offered. The ‘positive case’ – that we are simply ‘better’ ‘together’; that ‘UK’ is ‘OK’ – doesn’t reflect the experiences of Scots struggling to survive on a meagre paycheck, who are unable to find meaningful work or seeing their friends or neighbours dependent on foodbanks to feed their families.

Simon Schama’s lyrical defence of the union [here] was as good as any attempt to argue for a No vote. Sprinkled with references to Bannockburn and Culloden, it is patriotic and backward-looking in a way that would embarrass most Yes supporters should we attempt something similar.

To Schama, a No vote is motivated by “those who feel enriched by sharing a national home with people who do not necessarily look, sound or pray like themselves but nonetheless manage to live in neighbourly sympathy”. If he believes that the independence movement is a rejection of this then he has not been listening closely enough. When Schama writes of an embrace of Britain as an embrace of multiculturalism you could be forgiven for looking with scepticism at the likely triumph of UKIP in European elections this week, or at the UK Government’s despicable ‘Go Home’ advertising campaign, and considering whether a Yes vote is the obvious choice for those who want to live in an inclusive and diverse home.

We want neighbourly sympathy, Simon. But as long as the spectre of UKIP haunts Britain we’re not sure if it’s on offer.