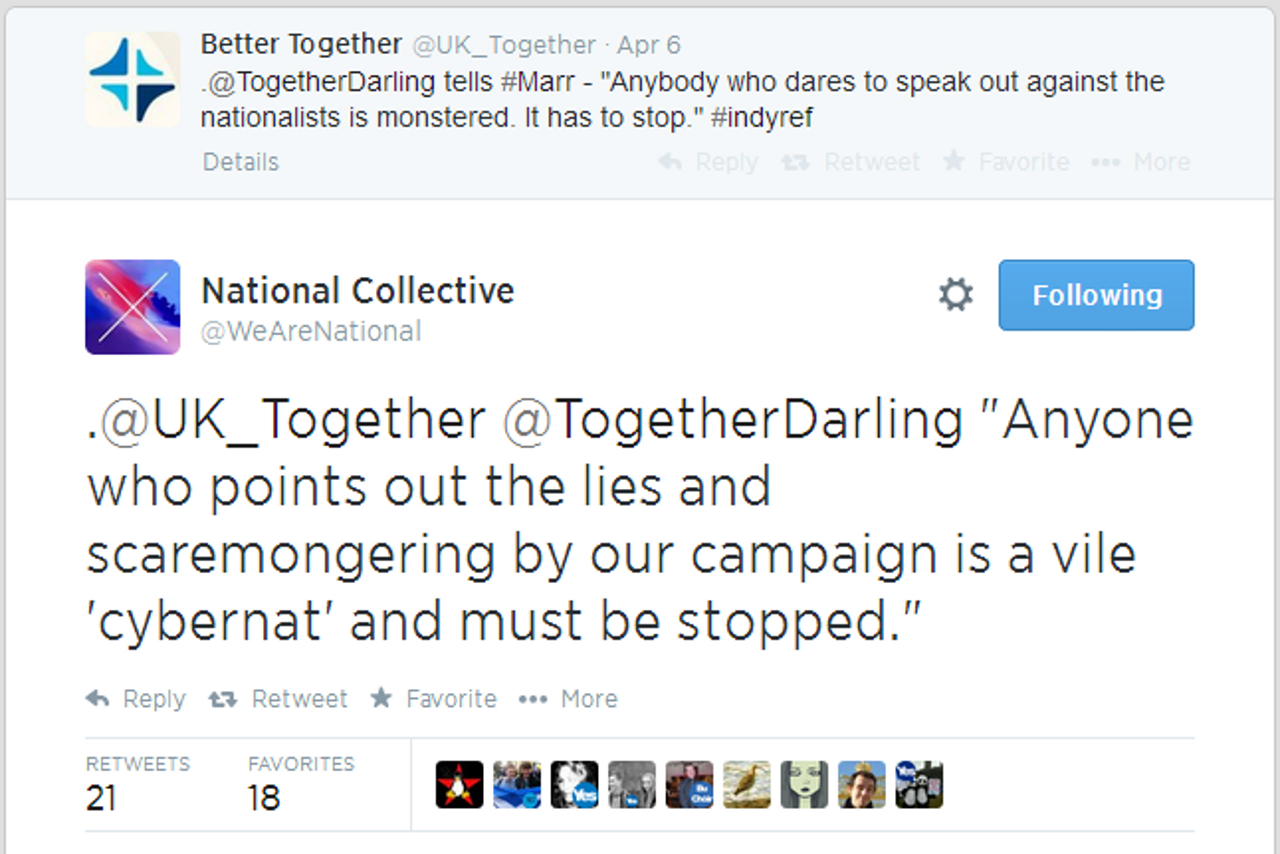 I had great hopes for this piece. I wanted to wax poetic about the state of the independence debate, in particular the various rammies that are so abundant online between the ayes and the naws. I had the best of intentions, I really did.

I’m quite old, compared to the rest of the young chaps in National Collective. I’m certainly old and hoary haired enough to remember when football hooliganism in Scotland was as bad, if not worse, than it was in England, and I am old enough to remember the change that came about in the Tartan Army after the English FA were sanctioned for the shocking behaviour of some of their fans. Oor boys (and girls)  decided to become the ‘world’s friendliest fans’, principally and specifically to humble and humiliate English fans. We went out of our way to make our sporting spirit, our bonhomie and our general sheer bloody chumminess (in kilts) a scandal to English fans. And it worked, our behaviour won plaudits around the world, and English fans began behaving less like we used to ourselves.

Today, I’m kind of struck with how similar the situation is in the referendum debate. Not in the Scottish v English sense, please don’t think I’m perpetuating that awful piece of pish, but in the sense that there’s a real hateful aspect to much of the debate. We seem to be racing each other to the bottom of the barrel, and I’m not sure who’s winning. Both sides are rightly derided for the low, unsubtle and frankly embarrassing way they have of dealing with the opposition. When someone, of either persuasion, posts something or makes comment publicly, the competition gathers round in ever increasing number, like white corpuscles fighting off a blood infection, until either the voice is smothered into silence, or the rumpus raised is so great the mainstream media report on the rumpus rather than the original point.

There is a deepening tribalism. I suppose that is entirely understandable, we are, after all, talking about the very future of our nation, but aggression of the sort that used to mar our daily life when protestant met catholic on or off the football field is wrong. Sectarianism has no place in 21st century Scotland, and the vile, aggressive and hugely distressing slanging match that is increasingly filling the internets has no place in this debate.

It’s a sad fact that most of the argumentation and attempted rebuttal is of a pretty poor standard, full of assertion, insult and acrimony, half truths, misinformation and spin, but containing very little substance. I am not for a second criticising debate, robust or otherwise. Every public assertion merits a healthy shredding and, if it doesn’t stand up it doesn’t deserve to stay in the light of day.

And then my head exploded.

Seriously, I was going to include a few comments from both sides of the argument, showing the level of debate that can easily be found online, I’m sure you’ve all seen it or been subjected to it, but after trawling a few of the posts on the Yes Scotland and Better Together Facebook pages, and raking through Twitter, I just couldn’t take any more. It is soul destroying, and I am extremely concerned that the biggest decision the people of our nation has ever been allowed to participate in has been reduced to incessant questions that have already been answered and personal attacks of the physical attributes of Nicola Sturgeon and Alex Salmond. Ten minutes of this stuff would turn Cicero into a burbling, hair-pulling heap. I just can’t do it, it’s depressing me.

For sure, the ‘cybernat’ of popular myth does indeed exist, but he/she is far outnumbered by the hordes of the unionist campaign, whose smug, self congratulatory derision of the independence movement, no, of the *individuals* in the independence movement, is utterly beyond contempt. In all fairness, the ‘cybernat’ is also beyond contempt, but he/she does occasionally sleep, and he/she does seem to be very much in the minority, despite what the commentariat would have you believe.

Of course our ideas, opinions and beliefs are dearly and passionately held, and we are right to express those ideas and opinions loudly and creatively, but you just can’t argue with a fencepost, so we shouldn’t.

Much has been made recently about this social media enabled aspect of the debate, and the consequences thereof: Is it damaging to our society? Will we all be able to live together after the vote? No one seems to have the answers. Some make light of it, some are so incensed they want the police to intervene and lock up anyone with a differing viewpoint, but I think the most important point is being entirely missed. When debate operates at this level, when squabbling, name-calling, personal attack, smear and ill informed invective, sound loud in the ear of the voting public, then the real debate gets drowned out. If we can be stirred to anger and spite, then the facts of the matter take second place to beating down the opposition and, in this scenario, everyone loses. We end up with a society that, by default, is the opposite of the one all of us, unionist or independence supporter, aspire to. What kind of future does this lay the foundations for, regardless of whether the result is a Yes or a No?

No one is stupid for believing something different to what I believe, and I wholeheartedly reject the idea that I am an idiot for believing my beliefs rather than yours. I do, however, think anyone who listens only to what is said by politicians and the media, without seeking to find out the truth behind the words, is an idiot. People leaning towards voting No hold Scotland dear, and they hold honestly to the belief that we are fundamentally better as part of the United Kingdom. In the same way, we ‘separatists’ are nothing of the sort. We too have Scotland’s best interests at heart, and we aren’t part of an evil conspiracy to ruin the country and everyone in it.

We will never change a person’s mind by telling them how simple minded they are for holding a view, and no one will alter my opinion by suggesting I am ill equipped to engage in a battle of wits with a bar of soap. Politicians and the media are playing with our future, our destiny, for their own ends, and people are sooking up the pabulum served to them because they are too lazy or too narrow-minded to make the effort to discover for themselves the truth behind the words.

The politicians and figureheads, Cameron, Osborne, Darling, Alexander, Carmichael, and the rest, these guys are all smart and capable men, they have beliefs and ideals, honest opinions, but they have chosen to follow a career in the shady and duplicitous demi-monde of politics.  Success in this arena requires a well skilled forked tongue. Politicians just seem unable to answer simple questions simply, if they answer them at all. They know what they are doing, we know what they are doing, we all see it for the farce it is, but still it continues, this is politics. It’s horrible, it’s divisive, it’s manipulative, but it’s politics. I don’t understand why that is the case, to me honesty really is the best policy, but that’s just the way it is. For now. One of my main reasons for supporting independence is that I want to see an end to, or at least a dramatic reduction, in the playacting of politics.

I have this ridiculous idea that no one can be so right that they can’t even imagine the possibility they might be wrong. This thought, if we held it to our breasts and took it out to look at every now and again, is one that could keep us humble and open to the persuasive strengths of a well formed, honest and intelligent argument.

In the debate proper, numbers are thrown about like algebraic confetti, all proving precisely opposite positions. It’s confusing, and it’s hard, but the only thing we can do, the only thing we should do, is examine everything in as much detail as we can, and come to an informed choice. People want certainty, well there are no certainties. Life is a gamble. All of it. I will always choose the option that offers the most positive, most controllable, most exciting possibility. In this instance, that is Yes, but I understand the fears and worries of those just shy of the same position.

This is not a political election, it’s a decision to utterly change the face of who and what we are as a nation. This is our obligation to everyone else in our country. By all means, we can and should attack the arguments, pick apart the assertions, forensically examine their figures and forecasts, but we really need to ca’ canny on Alistair’s eyebrows.

Real life isn’t politics and, when we confuse the two, tempers fray.

Alex Salmond recently explained to Sally Magnusson that prior to the 2007 election his political demeanour had been more aggressive and hectoring, but advice had suggested he change his manner to one of positivity and aspiration, hope. This has clearly had results, even if there is a residue of antipathy towards the man himself. The Yes campaign has been unremittingly positive, again with a few exceptions, and it is working, people are moving our way.

Is it possible for us to rise above the cockfight and scandalise our opposition by means of our intelligence, good humour and humility? I’m not sure, but we should bloody try.

There are three days left in the Yestival crowdfunder. Donate here to help us take our movement to communities across Scotland: