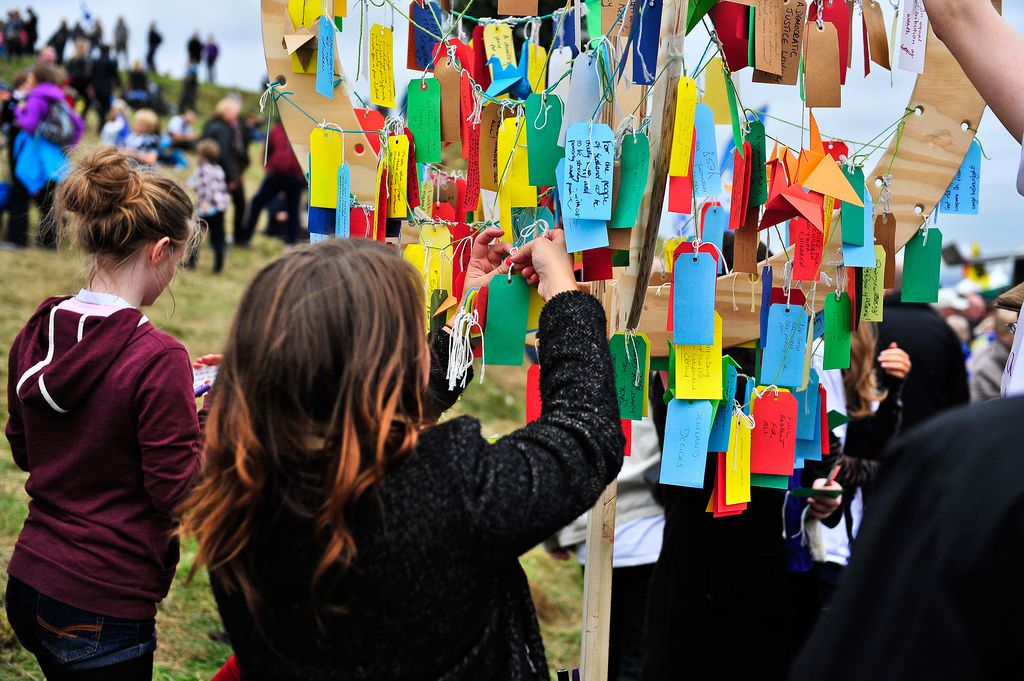 I was saddened to read your blog post about your reasons for supporting the Better Together campaign. I was dismayed to read your fears that a minority of nationalists will consider you ‘insufficiently Scottish’ to have a valid view. Yes, there are extreme views on either side of the debate, but they are in the minority.

It is healthy for any democracy that the great literary figures of a nation feel able to express their views with such clarity. People such as yourself hold influence across our society and your words have brought hope and joy to children and adults not just here but across the world. I hope your expression here allows others, especially more women, to feel able to engage constructively in our debate.

It is not my intention here to rebut your arguments, but rather to offer a response.

I would not call myself a nationalist. I would not call myself an anti-nationalist either: it makes no sense to me to define myself in such negative terms. The nationalism I feel comfortable with is a civic nationalism, a welcoming narrative, a politics of inclusion where all those who choose to live here, on this part of the planet, are welcome. The kind of nationalism that makes you deeply uncomfortable – an ethnic nationalism, a politics of exclusion – makes me deeply uneasy too. Yes, nations are fictions; they are stories created from human imagination. This debate, for me, is not about where you come from, nor the ‘purity of your lineage,’ it’s about the direction we want to take as a society. It’s about the story we choose to believe in.

I appreciate that there are legitimate concerns with independence. Yes, a 21st century Scotland faces the same pressures as all nations across the world. Of course there are huge risks with independence, and we would be foolish not to appreciate the serious nature of these. For me, the opportunities far outweigh the risks. Like many others, I have to believe that we can do better.

Neither do I share your confidence about devolution post-No. Yes, devolution has protected us from – or rather, allowed us to mitigate against – what is being done to public services south of the border: a systematic destruction of the NHS, welfare and education. A free health service, a welfare system and free education for all are absolutely vital for the flourishing of society. The only possible means to protect what is vital is to vote Yes.

And Yes, I understand your frustration and suspicion of the Yes campaign’s never-ending smiles and rainbows. But this is politics: the Yes campaign is forced into a situation where it cannot be seen to admit any flaws in its argument. It is the positive polemic to the No campaign’s relentless negativity. But look beyond Alex Salmond’s veneer and beyond the ‘official’ campaign. Here you will find the unofficial grassroots campaign of many colours and voices, free from the trappings of political manoeuvring. Like never before, we are witnessing a flourishing of ideas where reasoned, intelligent thinking beyond each side’s rhetoric and propaganda can be found. We are also witnessing an outpouring of passion, spirit and energy, with new communities forming to put this thought into action.

J.K Rowling, the campaign you see is not the campaign I see. I see a generation of people who are not afraid, who speak articulately, passionately about the possibilities of a better future. I am struck on a daily basis by the goodwill, kindness, open-mindedness, generosity, intelligence, creativity, humility and sheer dedication of all of those giving their everything to this movement. My own involvement has been one of the most humbling and inspiring experiences of my life. Of course, we don’t all agree on our political vision, but we do have one thing in common: we have the desire to work together towards a better future.

To be asked, ‘what kind of country do you want to live in?’ is the most wonderful gift. Many people have taken this opportunity to empower themselves with knowledge. They are actively engaged in the world, not passively accepting of the status quo. They could have chosen to remain, in your own words, ‘comfortably within the bounds of their own experience, never troubling to wonder how things might be improved.’ They could remain switched off. Now we frequently overhear the #indyref discussed passionately at the taxi rank at 3 o’clock in the morning on a Friday night; in the chippy queue; at the hairdressers. It is being discussed by high school leavers: full of hope, full of promise for life and all the joy and wonders and pain it brings.

This referendum question has sparked the imagination of the nation. J.K. Rowling, I do not need to extol to you the virtues and the power of the imagination.

I am reminded of reading a speech you gave in 2008 to a class of Harvard graduates. I had just begun researching for my PhD (on the power of imagination, the power of story) and I found your speech to be honest, inspiring, and true. You said then:

“The way you vote, the way you live, the way you protest, the pressure you bring to bear on your government, has an impact way beyond your borders. That is your privilege, and your burden.”

This rings true J.K. Rowling, for me and the countless others who have dedicated themselves to this campaign. I do not believe that independence will be easy or will somehow magically cure society’s problems. What this historical moment provides us with is an unmatched opportunity to participate in the writing of our own future. We have a chance to liberate ourselves from the stranglehold of austere Westminster politics and lead by example. We must ask ourselves, what really matters?

This is campaign is about hope over fear. J.K. Rowling, to quote your own speech: “What we achieve inwardly will change outer reality.That is an astonishing statement and yet proven a thousand times every day of our lives”

We need a new story to live by. In your own words: “We do not need magic to change the world, we carry all the power we need inside ourselves already: we have the power to imagine better.”

A friend of mine reminded me, just this morning, of this beautiful poem by Maurice Lindsay. Scotland’s a sense of change, an endless becoming. Scotland is an attitude of mind.

Again, your own words: ‘As is a tale, so is life: not how long it is, but how good it is, is what matters.’

We would be delighted to extend an invitation to yourself to attend one of the many Yestival events taking place across Scotland this July. Our ‘Imagine a Better Scotland’ event at Summerhall in Edinburgh between the 9th and 12th of July promises to be a series of inspiring and engaging events for everyone who attends. We’d be thrilled to see you there.