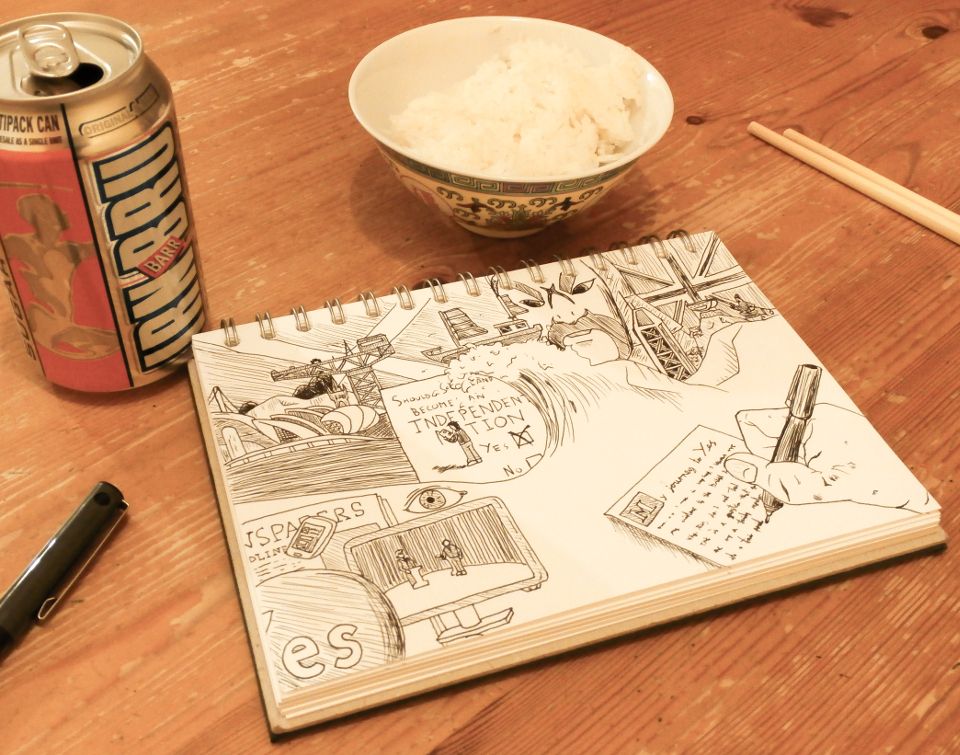 As somebody blessed with the gift of being mixed-race and multi-cultural, the independence debate has added layers of complexity for me. I am a product of the conquests of the old British Empire, and without it I quite literally would not be here. So why is it that, in the face of the referendum, I don’t feel any particular desire to remain tied to the union?

My name is Chris Manson, and I want to share with you my referendum experience as a child of the colonies.

It may not be the main crux of the referendum debate, but the issue of national identity lies very close to the hearts of many. For some, the chance to become Scottish in nationality as well as in spirit is a fantastic opportunity that must be seized with both hands. For a great many others, the prospect of losing their British identity is a sad one – three centuries of tradition and joint achievement disappearing in a flurry of ballot papers.

I’ve always viewed the latter notion with some puzzlement. If there is a Yes vote, would you personally change on the 19th? Is there a personality switch that trips, dependent on the country you reside in? When your citizenship changes, does your history, your heritage, your very living memory change along with it?

Of course it doesn’t. Having moved from Hong Kong to my father’s homeland in 1992, have I become less Chinese than when I left? I still have fond memories of my family over there, of the sights and sounds and smells unique to the great port city. I still eat the same food as I did when I was wee – although admittedly ducks’ feet and snake soup are considerably harder to find in Erskine. I still have the same cultural knowledge, the same millennia of history behind me, the same ancestors peering over my shoulder and judging me every time I do something wrong. I am no less Chinese now than when I lived in Hong Kong. In fact, over the years I’ve been able to learn more about my heritage, and to connect with my oriental roots.

What I have become, however, is Scottish as well.

That was only natural, really. Introduce a child to an environment early enough, and they will adopt the customs and styles of their peers. In my case, I lost my international accent, and grew into the traditions, quirks, and culture of my new Scottish home.

I grew up in a socialist household – a bit unconventional for a police family, but my father had been a Labour supporter all his life and had gone back to his original calling, teaching. At home, my sister and I learned about the virtues of equality and fairness, about the advantages of a level playing field, and of helping out those who could flourish if they were just given the right chance. In school I learned about our country’s history, and its role in shaping social policy for the better. I learned about the new Scottish Parliament, and how it was to help us. How it was a step towards the ideal goal of independence, of liberation, of self-determination.

In and around Glasgow, I was introduced to the wealth of art, music, and contemporary culture that Scotland is rightly proud of. I loved Burns. I appreciated Rennie Mackintosh. I have vivid memories from my early youth of being enthralled by the art of Alasdair Gray. As I grew older, I began to read his novels, and I gazed into the future with Iain M. Banks. I went to listen to the RSNO and the BBC Scottish symphony orchestra. I studied and played at the RSAMD juniors, mingling with Scotland’s finest as part of the National Youth Orchestra of Scotland. I browsed exhibitions and appreciated the talent of local artists, growing my interest in painting and visual storytelling. I remember going to plays, ballets and operas at the Theatre Royal, and being thrilled at the energy and cleverness of the performances. I wasn’t just steeped in Scottish tradition. I was a part of the living, breathing world of a thoroughly modern Scotland.

None of this has impacted my Chinese identity for the worse. Rather than allowing one identity to supplant the other, I pick and choose the best of both: I’ll have my haggis with neeps and rice. I’ll celebrate Burns night, and a few days later cheer in the New Year. I’ll write stories with selkies and kelpies and gau mei wu in them. I love being a bit of both! I have two rich, complex, fascinating cultures to draw on, both with their own legends and customs. To me, there simply is no reason for me to force myself to pick only one. Why should I, when both enrich my life and do not clash or contradict each other?

That’s what I want to share with those who are fearful of losing their British identity. There’s no need to limit yourself to just one culture, or to change the way you identify just because of the way you vote or the sovereignty of your country. If you embrace the positive change that Yes offers, what’s to stop you from being a Brit who’s also a Scot?

Isn’t that who you already are?

You can still be proud of the achievements of Britain throughout the years. You can still enjoy the works that great British artists have created, or be grateful for the tremendous contribution to science and technology that British innovators have brought. You will still share a common history with our neighbours. You will still speak the same eloquent and expressive language. You will still possess the same legendary sense of humour. All the things that build up to make Britain British – none of it will change on a Yes 19th, nor will it change beyond that.

Scotland is currently part of Britain, and will retain that distinction as surely as humankind remembers its own past. Fear over losing one’s Britishness is no reason to vote No. There’s no need to throw away our traditions, our history, the shared elements of our national character in the event of a Yes vote. In fact, we’d surely be able to celebrate Britishness even more; independence may be a question for Scotland and her people, but without the cooperation and understanding of Britain, we might never have been granted the chance for peaceful democratic change.

So, I urge you – embrace independence as you embrace your Britishness. Your sense of identity will disappear only as much as you let it – independence will free us from the ties that bind us to the self-serving old boys’ network that is Westminster. It will not sever the bonds that have been built up over the last three centuries with our erstwhile countrypeople. It will not drive a wedge between our two countries. It will not transform either of us into a completely alien culture. It will allow us to stand shoulder to shoulder, as equals, as independent and free-thinking friends.

There are hundreds of thousands of people just like me all around the world, who own both sides of their heritages with equal love and passion. Follow in our footsteps, and you too can look forward to a Scotland that steers its own course while remembering where it came from.

Dare to be multicultural. Dare to vote Yes!