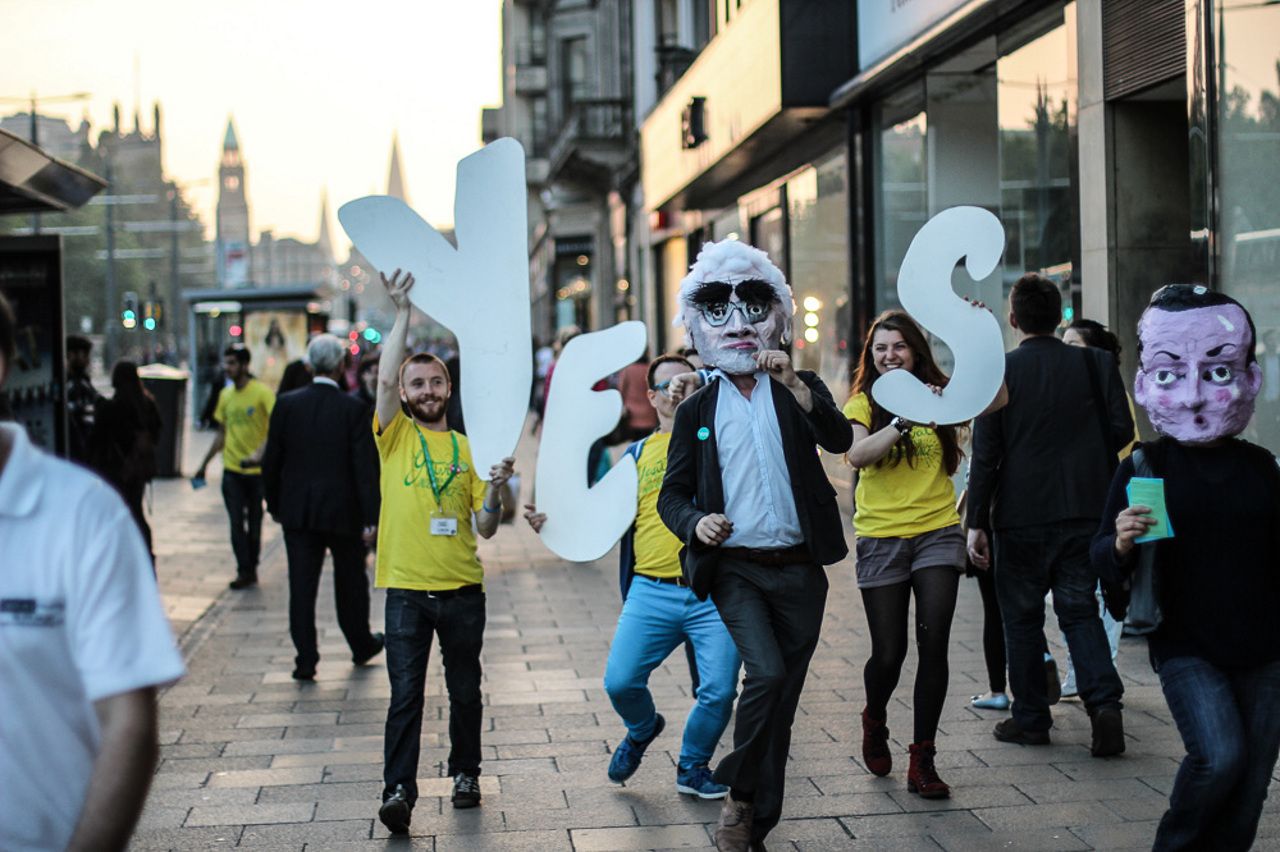 I am a lecturer in Contemporary Performance Practice at the Royal Conservatoire of Scotland – that is my job – but whichever “hat” I put on dependent on my role, be it “educator”, “woman”, “academic”, “member of the arts community in Glasgow”, or “someone with a belief in equality” my response to the upcoming referendum on Scottish independence is Yes. I am a feminist but I am not going to speak about the “women’s issues” in the independence debate, as for me, all of the issues around the future running of Scotland are women’s issues. Instead I want to offer my observations on how politics are being “performed” throughout this campaign.

Performance maker Kieran Hurley says “people say there are more artists voting yes because artists tend towards imagination, hope, and possibility rather than a kind of level-headed rational pragmatism.” He adds: “Because that’s supposed to mean we don’t really know what we’re talking about, not like proper grown-ups. But if the outcome of this so-called pragmatism of yours is the brutalising logic of failed austerity then maybe it’s time to listen to the artists.” I agree it is time to listen to the artists, but I also think it is worthwhile noticing what everyone else has been doing to engage creatively and imaginatively in the debate through small everyday actions. Let’s take performance artist Joseph Beuys’ assertion that “everyone is an artist” for the purposes of this conversation.

I would draw distinctions between Politics and Performance with a capital “P” – “Politics” referring to the current governmental political system (think House of Commons, House of Lords – “politicians” politics). “Performance” with a big “P” suggests performances that are professionally produced and take place in a theatre venue to an audience of paying customers. On the other hand, politics with a small “p” encompasses personal politics and small grassroots movements that encourage people to engage in the issues that affect them and their lives. According to performance theorist Richard Schechner, “performance” with a small “p” can involve any aspect of culture, society or life being read “as” performance.

Let’s look at the big “P”’s first. On Thursday over 100 MPs arrived in Glasgow from London and were accompanied up Buchanan Street by a man on a rickshaw playing “The Imperial March” from Star Wars while announcing via megaphone: “People of Glasgow! Your Imperial Masters have arrived!” This comedic demonization of the politicians who embody Politics with a capital “P” demonstrates attitudes towards the enactments of power, dominance and bias from Westminster highlighted in the events of the past week. Over a month ago the first televised debate between Alex Salmond and Alistair Darling took place in the Athenaeum Theatre of the RCS as the performances of politics were literally placed on a stage for the drama to play out. These performances from politicians remain out of touch – like bad actors performing in a play with no set ending while the interruptions of the public provide rare moments of clarity, authenticity and humour.

Professional Performance was slow to respond to the referendum. In the 2013 Edinburgh Fringe less than 10 of the 3000 shows addressed the independence debate while this year, the EIF director Sir Jonathan Mills, claimed his planning for the 2014 festival hadn’t “coincided or been influenced by” the Scottish independence referendum. Andy Field, of Edinburgh’s Forest Fringe, suggests that a theatre without politics is pointless and states: “Perhaps when he leaves Edinburgh International Festival, Jonathan Mills can try his hand at creating the world’s first food-less restaurant.” Predictably, all this attempt to avoid political engagement did was encourage a number of festival shows to explicitly tackle the issue – but has the response from professional theatre been too little too late to fully engage in the debate?

On the other hand, we have the small ‘p’s. The surge of grassroots movements and political gatherings around affinity, community and shared goals has been phenomenal, and with 97% of the population registered to vote an unprecedented voter turnout is expected. As well as standard electoral behaviours such as canvasing and public meetings, the referendum has provoked a number of other embodied and creative ways of engaging in the debate and performing a Yes politic via social media. Community groups pose with Yes signs in various parts of the country, people drape themselves in Yes banners and flags on tops of hills, by lochs, by the sea and in city centres. Yes badges and T-shirts allow politics to be worn literally on the sleeve.  In Spain, holiday-makers write Yes in the sand on the beach and post images on to social media sites – an alternative/politicised holiday snap demonstrating a political affirmation marked on the land of another nation (well, until a big wave comes anyway). Whole sides of houses are emblazoned with the word Yes to attract attention of passers by – the building performing the politics of the people that live there. “Yes” is written in 20-foot letters on the ground, whole communities gather and are photographed, an aerial illustration of the number of people who want to unite around the word and what it promises. Farmers are mowing Yes in their fields to be seen from a distance. These are small and simple actions. But they are happening everywhere. And the documents of these small embodied acts provoked by a political opinion and a desire to find a way of communicating it are all over facebook and twitter, as prominent contemporary sites for performances of political discussion and debate.

The independence question is about how Scotland will be governed – it is not about Scottish identity, although many of the performances that discuss the debate use some of these tropes to explore this cultural moment. My colleague and collaborator David Overend is currently working on a performance called Wallace with Rob Drummond which opened yesterday at the Arches and ends on the evening of the 18th. The show includes a live debate with audience questions, a history play and a series of duologues for a modern-day William Wallace. David emailed me about his sense of unease with the image they have chosen for the promotional material for Wallace. “Finding the right balance between self-parody and political integrity is very difficult. In the end we went for an image of Rob dressed as a shabby William Wallace impersonator surrounded by journalists and politicians. But I don’t know how helpful it is to perpetually circulate that image. I hope we can deconstruct it effectively. Do you think Mel Gibson’s f**ked it up for us all?”

The image of a shabby Wallace (as an impersonator) amongst contemporaries from the media and politics mirrors how the independence debate is metaphorically performed and played out in the wider sense. A well-worn image of patriotic pride and Hollywood re-imagining (now tarnished and irrelevant?) at the centre of the media and political sphere while arguably the real political performance is happening elsewhere – in people’s homes, on people’s homes, through social media, in village halls and community centres and on beaches and on streets. While “Politics” has been offering threats and perpetuating fear and “Performance” has failed to engage until the final moments of the debate, personal politics and everyday performances which seemed to be the understudy in this drama have actually taken centre stage in the debate. To drop these banal theatrical metaphors (contemporary performance practitioners rarely even perform on a stage) I want to leave you with a final thought.

The performances of the everyday that I have been talking about may seem trivial or unexciting or unimportant to this debate and the politicians that control it. But something is happening. Joseph Beuys famous slogan “Everyone is an artist” was not meant to suggest that all people should or could be creators of traditional artworks. Rather, he meant that we should not see creativity as the special realm of artists, but that everyone should apply creative thinking in their own area of specialization or interest and it seems that the independence debate has allowed for new ways for people all over Scotland to creatively enact their politics in ways that convey engagement and participation rather than nationalism and identity. So yes, Mel Gibson might have f**ked it up for us all, but we can change that.