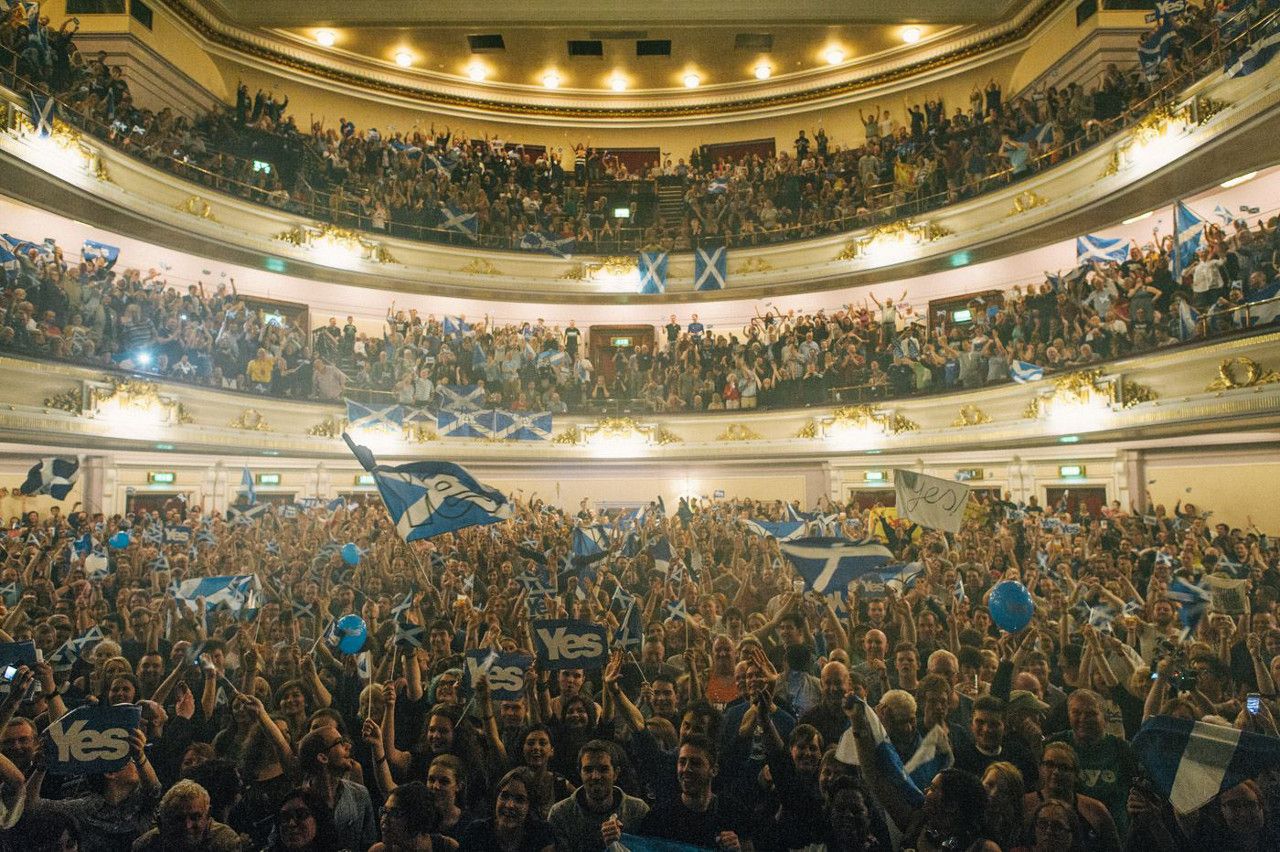 Less than a week before the referendum and the forces of darkness are circling us. We have a media trumping up every scare story to Old Testament proportions – plagues of febrile locusts will descend to feast on your mortgages when there’s a run on the pound; darkness will fall on the Scottish economy as the banks flee south; every first born child will be condemned to beg for a visa at the border. But the Scots are a canny people and we’ve heard all this ad nauseam over the last two years. Behind every scare story there is the truth. City investors are simply pulling scare tactics: the banks actually aren’t moving very much at all other than to be a little closer to their oligarchical friends; the only chance of border control is if the rUK decides it can’t stomach the EU anymore and leaves. Scots might be feeling pretty uncomfortable right now, what with the trembling hand of Britain directing a nagging finger, but the will can hold.

But three men are in Scotland right now, representing that supposed mighty hand of the UK. They’re bullying and bribing their way around, often without any scrutiny from an at-best complacent media and, at worst, a compliant one. There are a few chinks in the unionist media’s armour – The Telegraph, not the most friendly to Yes, described Brown et al’ “drawing up a new constitution on the back of a fag packet.”  As a smoker, I think that gives an inaccurate portrayal of the size of tobacco products nowadays – you could write the new powers on a postage stamp, using the word “None” as William Hague confirmed this week. And they’ve brought the full circus to town; one where the likes of John Prescott are having to write the name of what they’re campaigning for on the back of his hand while reading from the Big Book Of Things You Shouldn’t Say In Scotland. But I feel the tension. Previously soft Yes voters now swing to No, visions of their children destitute in the street on September 19th dogging them. We must stay calm and continue with passionate yet controlled persuasion that has served us well in the campaign so far.

We will still win.

We still trail in the polls – ignore the YouGovs and ICMs of this world – we are still the underdog. We’ve always been behind. We’ve had to face a dying empire using every power it has to frighten, be it favours from their close friends, the “impartial” economists, or using the press department of banks we own to spread fear and uncertainty. Unionists are mobilising with usual tactics: it will be violent; there are still unanswered questions; I’ve personally been called a Nazi three times this week, my fault clearly, as I thought we’d entered into a more mature debate. We will likely go into the 18th of September trailing, even beyond the kindest margin of error. Scare stories will have their impact; there will be knotted stomachs when people make a cross on poll day.

I believe that we will still win.

You’re sitting at home with your family. Maybe some of you are at a party, daubed in blue and white paint, wrapped in flags. Others will be at work and while the television is in the background, you’re watching intently. At 1am, you see Blair McDougall, smiling, trotting the adages of “best of both worlds” around the paddock one more time, still unable to explain what that means. And continuing to flog a dead horse, Alastair Darling will harp on of “a victory for common sense” and “proof that the nationalist dream is over.” You’ll look at him and see a weary man, croaking from his stock phrase hymn sheet. He looks beaten, battered; months of sleepless nights and nightmare debates, having to quieten the voice of his younger self inside him, who seemed to question why old Alastair was now defending Trident, was now defending welfare cuts, was now holding the line shoulder-to-shoulder with Tories. He looks a broken man. But tonight, at least in a poll, he is victorious, by the smallest margin. No wins.

And yet, we will still win.

We will still win for all the events I’ve listed above. Labour, Lib Dems and (as if they needed to sink lower in Scotland) the Tories have all indulged in “poisoning the well” tactics. How can Labour win another Scottish election when Miliband, followed by his cronies, have actively campaigned against Scotland getting the pound? How can the Lib Dems make a run in Scotland when they couldn’t even agree among themselves what new powers they could offer? The Tories, other than in the Borders, look even further away from the reality of Scotland than ever before. All three Westminster parties have thrown every single scare story, pulled every dirty trick, and now look profoundly anti-Scottish to just about every member of the electorate, Yes and No alike. These tactics, from the get-go, seemed to be born of the belief that if it was a No vote, the drive to independence would evaporate on September 19th. All those marchers, those protestors, those alternative media gems like Bella Caledonia, Wings Over Scotland and Newsnet, radicals like RIC, economists like Business For Scotland, swathes of creative people from National Collective and beyond – they would all simply pack up and go home. That the union would be safe for another 300 years. Pyrrhic victory doesn’t cover it.

And we will still win.

UKIP is rising in England. The Tories can potentially hold power. Boris Johnson could be PM – and he actively dismisses Scotland. Will Scots accept that scenario?

For those reasons and more, we will still win.

The people of the UK are waking up and querying why Scotland should get more powers – that is, if we ever get them. The Welsh are led by a Unionist, but now he even wants more devolution. Voices are calling for London to be given tax-raising powers; Manchester seems to be moving in a similar direction. More powers for Scotland? A No vote and you might end up with as much autonomy as Stoke.

And that is why we will still win.

We must continue to believe in a win on September 18th. We must fight with everything we have for it. If we awake on the 19th to find we’ve lost, it will be heartbreaking. I will probably cry; I will have to watch my mother – who has believed in independence for nearly half a century – be inconsolable.

But we can console ourselves with the knowledge that the march to self-determination is not ended this year. The circumstances are pulling in our favour– right wing England is rising, the Westminster parties can never be trusted again and the rallying call of independence has told many, like myself, that we are far from alone in a belief in self-determination. It has unleashed an unstoppable creative, energised force that will dominate Scottish politics for the next decade. And that is why, however long it takes, we, the people who believe in the right to control our own destiny, will control that destiny. We are confident, we are inspired, we are united. We are on the right side of history. The game is set and it’s a game I believe we will always win.