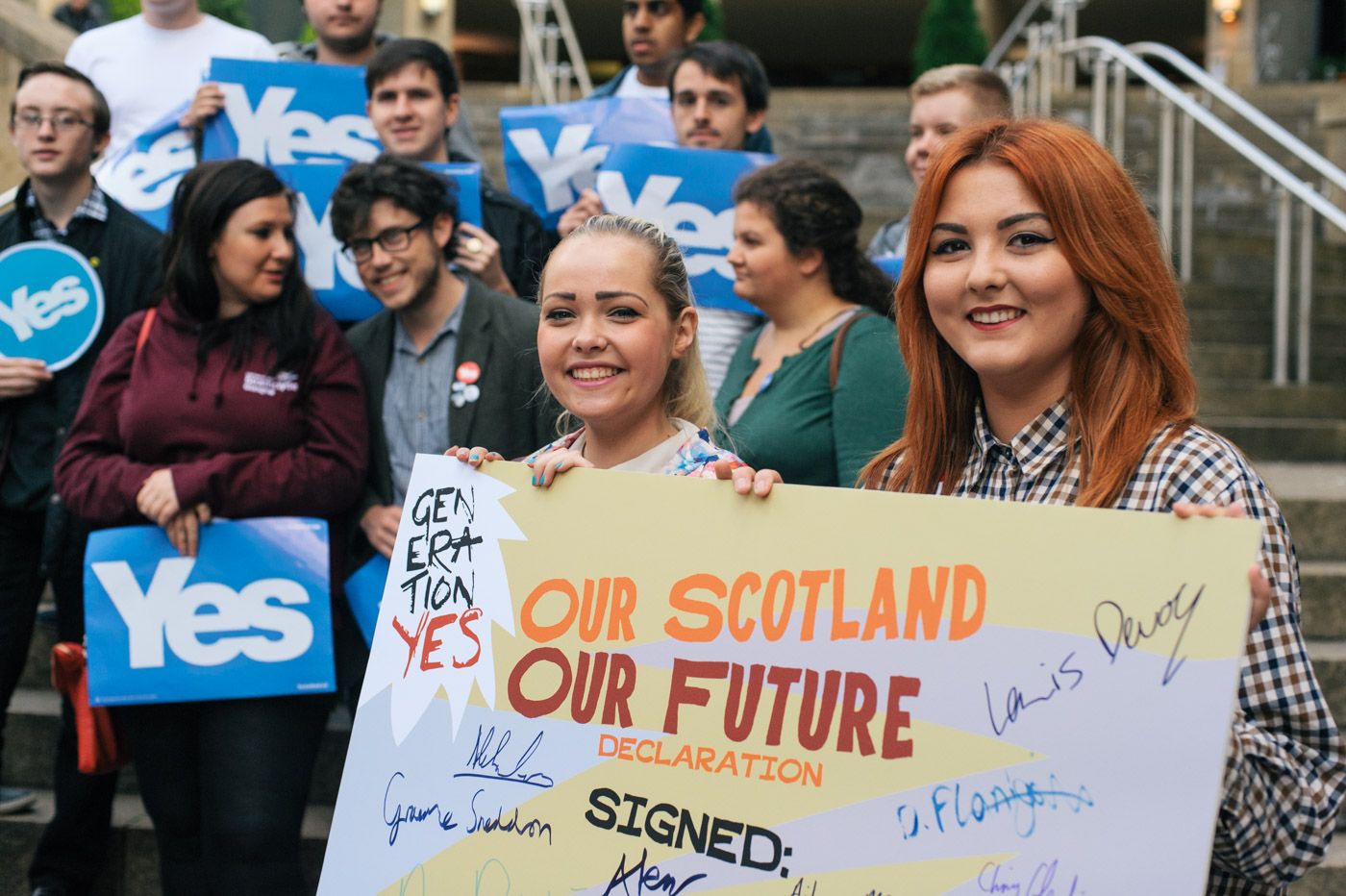 One of the most heartening things to come out of Scotland’s Referendum debate was the engagement and participation in the process of young people. Over the last decade (and more) the gradual shunning of conventional politics by young people had led to a belief (in some quarters) that the legitimacy of our democracy would be called into question should their disengagement continue. Since 2001 no General Election has seen more than 50% of young people turn out to vote. Young people are voting less, are less likely to register to vote and are uncommitted to political parties.

That young people were involved in this debate was a welcome step for many who have been arguing for their inclusion for many years. It has long been recognised that engaging young people in the political process during their school years holds the potential for young people to have a ‘participative footprint’ that can lead to greater involvement throughout their lives. Although schools have ran citizenship lessons, pupil councils and such like for a considerable period now these have been recognised as (in the main) tokenistic with little actual power being ceded to young people – leading them to become apathetic, and who can blame them? Citizenship lessons have tended to focus on the social responsibilities of young people rather than engaging with politics or the political process at all – a huge turn off for many youngsters.

If we want young people to truly engage in politics then we need to look beyond participatory measures for their inclusion. We need to look at the social status of young people – how they are treated by the institutions that they are asked to invest in. This requires us to look at the material circumstances young people find themselves in today. For sure, the referendum appears to have fired their interest – young people have been included in the debate, felt listened to and valued and they have responded in kind. But referendum’s don’t come round every five years (do they?!).

It is of absolute importance that we recognise one of the fundamental aspects of political participation is that people need to feel that they are involved and have a stake in their society. Exclusion from the economic sphere and the methods of production and consumption is undermining the level of commitment young people feel to participate. This has undoubtedly worsened in recent years as the withdrawal of social security and housing benefit to young people leaves the impression that they are less deserving of concern than their older contemporaries. What makes this all the worse is that it is young people who have been hardest hit by the economic turbulence of recent years with the unemployment rate for young people running at three times the rate of the rest of the populace. This is further compounded with recent studies showing that their real incomes have fallen faster in comparison to other age groups. Of course, these issues affect working-class young people more than their better off brethren but more privileged young people are also affected as they too can find steady employment increasingly difficult to obtain and their road to higher education barred by financial considerations (particularly in the rest of the UK). The fact that young people’s entitlement to social security and minimum wage is deemed less worthy than older age groups also serves to institutionalise the message that their requirements are seen as less important than ‘adults’. Academic James Côté concludes that due to these changes in their material circumstances young people now have the dubious honour of being considered a disadvantaged ‘class’ of their own due to the growing gulf in material circumstances between themselves and their older contemporaries:

As a result of several decades of this negative treatment, declining status, and targeting as legitimate targets of exploitative labour practices, the youth segment of the work force…now constitutes one of the most economically disadvantaged groups of the entire population and very few people object to this situation, seeing it as normal and justified.

Denied an adequate material standard of living and marginalised in the employment market young people will fail to find a stake in society, inhibiting their willingness to participate in the political domain. Unless this institutionalised marginalisation is addressed, I have grave doubts that young people will seek to engage in a political system which is dismissive of even their most basic needs.

This is compounded by the fact that the responsibility for young people’s disengagement from formal politics is blamed on them, rather than a system which ignores their views. Policy, media and political discourse continues to point the finger at the alleged apathy and selfishness of youth. Far from this being the case, much research has shown that young people are engaged politically. Indeed, young people are, much like the rest of the populace, utterly cynical about formal politics – disenchanted and disillusioned with the behaviour of our elected officials and turned off by a politics which absolutely does not engage with young people, their needs or their interests. And it must be borne in mind that cynicism requires a level of political engagement not required to be apathetic. As a result of all this young people are increasingly turning away from formal politics, feeling both disenfranchised and disconnected from a politics which is increasingly hostile toward them. Why bother paying attention to a world of grey men in grey suits which ignores their most basic of needs?

When young people have rallied to display their feelings on issues which they see as important, the reaction has bordered on the hysterical – witness the demonstrations against the illegal war on Iraq, the G8 and when the government trebled tuition fees down south. Media reaction framed young people as posturing, misguided and at worst, criminal. It seems that some forms of political participation are valued more than others. Allied to this the disproportionate response of the police (kettling school children!) hardly sends a message of valued political participation either, does it? What these do reveal, however, is that young people are engaging in politics, just out-with the formal sphere – their participation appears to be ‘issue-based’ reflecting a growing ‘consumerism’ with politics – dipping in and out, picking issues that are of importance to them. Much research has shown that young people are looking at issues such as militarism, Third World debt, animal rights, nuclear power, environmentalism and anti-capitalist policies amongst others – and have little confidence in their elected officials to either represent them or deal with what they see as globalised issues. Young people are engaging in new ways which the traditional formal structures are unable or unwilling to accommodate – such as petitioning, boycotts, demonstrations and online activity such as blogging and internet campaigning. Young people demand a new response and so far our old politics has not responded. Our institutions are failing to engage with the politics of youth – until they do, it will be of little surprise if young people remain outside the realm of formal politics. And if they continue to be labelled as ‘domestic extremists’ when they respond to kettling in kind, who can blame them when met with such appalling shows of state force.

Unsurprisingly, young people feel alienated and excluded from political decision-making processes, seeing politics as something that is done to them, and not with them. No doubt many people feel this way. It’s the supply-side of politics which is at fault here, not young people. As political parties become more marketised and target-driven, policy agendas are focused on where they can get the most ‘bang-for-their-buck’. And where does this lead? To the ‘grey vote’ – and young people’s agendas are seen as peripheral and of little concern. This has created a vicious circle where young people are not voting and now politicians can seemingly ignore their concerns with impunity. Whilst pensioners are courted by the political class young people lose with every passing year – their entitlement to the most basic of social security looking increasingly imperilled by the major parties at Westminster. Young people have become the victims of policy as they suffer for their ‘failure’ to participate in elections which do not speak to their lived reality. The misguided call by Russell Brand for young people to abstain from voting will not lead to change. Young people need to vote and to have their voices heard.

Given that young people have engaged in the referendum it will be of extreme interest to see if young people in Scotland do elect to participate in next year’s General Election. It’s hoped that there has been a ‘participative footprint’ from the referendum which will see a generation of politically engaged young people. If we want the following generations to become involved then it might be up to this generation to speak back to power to address the marginalisation of young people in society. And this means addressing their economic marginalisation and their political interests. This means taking a holistic view of their political exclusion, realising it goes beyond merely addressing their participative exclusion. Of course, the starting point means valuing the input of young people and asking them what they want, what would help and how we can address their exclusion. Only then will we be truly serious about addressing the political marginalisation of young people. If the situation continues as it is – and young people reject the General Election next year altogether – the continuing legitimacy of our democracy could be called into question if it is excluding such a large part of our populace. We should celebrate the fact that young people engaged in the Independence referendum, but we need to ensure that instead of this being a one-off it becomes the norm.