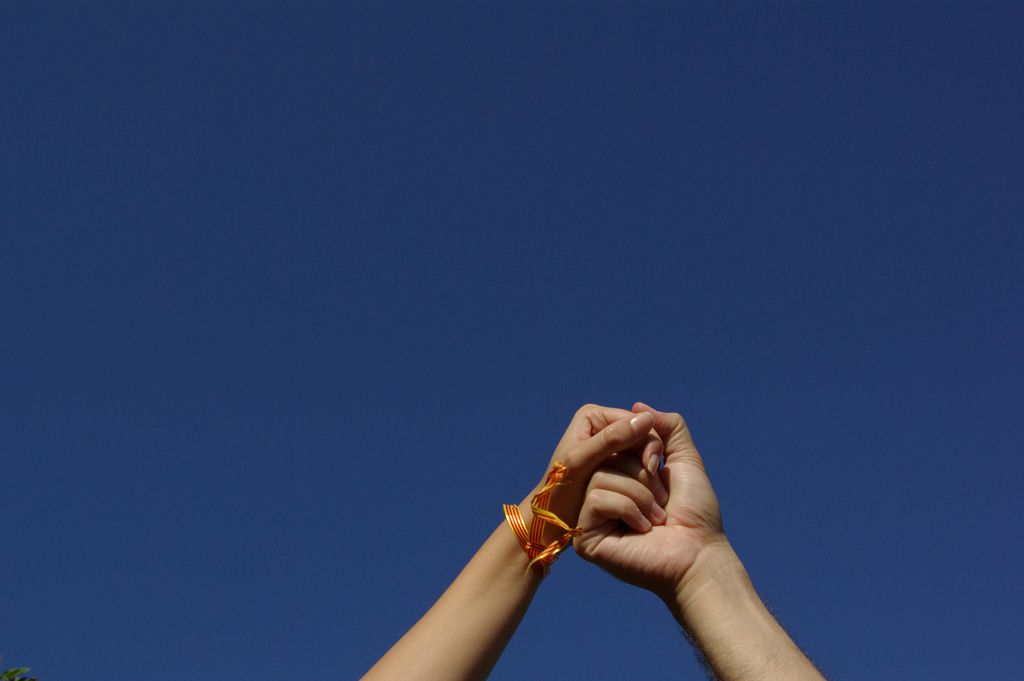 It’s getting late in the day in the Catalan countryside. At the family meal in a rural house near the small farming town of Prats de Lluçanès, everyone has switched from Castilian Spanish (for the foreigner) to native Catalan. It’s the end of a long, uncertain summer and the pine forest outside smells fresh and inviting once more after the final crescendo downpour of a thunderstorm. Sleepy children are kissed goodnight, large tumblers of wine are refilled, cigarettes lit and shoes flung aside as we pad down stone steps and out into the night air under a new moon.

At first, the dance is graceful and gentle; seemingly suspended in slow motion. It looks easy until you attempt to imitate. Friends join hands and cousins are hoisted onto shoulders. Everyone is serious and full of intent. Knowing looks are exchanged between older relatives (traditional Catalan folk dances were banned by Franco in the years after the Civil War). Voices compete to find the authentic chorus of a distant but familiar tune. Someone shouts ‘Molt bé, a munt’’ and the dancers begin to rise. A young girl atop her cousin’s broad shoulders stretches her arms wide to imitate the grace and wisdom of a mountain eagle. They fly in exaggerated, circular swoops, beckoning others to do the same.

This is La Patum country – the annual festival of traditional dances where local people dress as mystical, symbolic figures. It’s a long way from the saradana performed for tourists outside Barcelona Cathedral every Sunday or the castellers (human towers) rehearsed and organised with regimented precision. This is a dance for participants, not confused by-standers. I can’t connect it to the recognisable 4/4 rhythm of a Scottish ceilidh reel. I make my apologies and step back to try and make sense of it all.

On 9 November 2014, Catalans will stage a very public demonstration of their renewed cultural pride and civic confidence when they press ahead with a non-binding independence vote and what many see as the inevitable next step on the way to realising the region’s right to self-determination.

“There is no way they can stop this,” says Bernat Garrigos, an organizer with the Catalan National Assembly (a civil society group prominent in the independence campaign), referring to the Spanish government’s opposition to a vote.

The non-binding vote this weekend follows a protracted and very confusing back and forth stand-off between the centre-right Catalan Premier, Artur Mas, his pact with more leftist Catalan politicians to hold a referendum, and the national government in Madrid. In September, at the request of the Spanish government, the Constitutional Court granted an injunction against any official referendum on 9 November.

It seems that in Catalonia, everyone expects a Spanish inquisition. Perhaps in order to save face after two years of promoting referendum day to an excited electorate, or perhaps because the injunction is the latest in a long series of avoidance tactics on the part of the Spanish government , the Catalan leadership retreated to a somewhat ambiguous- sounding ‘consulta populaire’ (public consultation) and now, just in the last few weeks, to a residual, non-binding vote. Disempowered, the Catalan people are losing patience with the continued rhetoric and political posturing, on all sides. They didn’t turn out in their millions for the V for ‘Vote’ demonstration in September 2014 or the ‘Via Catalonia’ human-chain in 2013 only to be dealt a rehearsal referendum instead of the main event.

Here in Scotland, we might be feeling the hurtful chill of a bitter post-Referendum, autumn wind but our Catalan friends look on with envy at what they perceive to have been a transparent and peaceful self-determination process negotiated between Edinburgh and London.

Many Catalans complain that Madrid drains the region of taxes to subsidise poorer parts of Spain without respecting the Catalan language or culture. In a decision described as “incendiary” in the national press, Spain’s national budget for 2015 has given Catalonia the lowest settlement for public investment in 17 years. Meanwhile, those in favour of a unified Spain insist that Catalonia already enjoys autonomy under Spain’s written constitution.

The reality is that Spain cannot afford to lose Catalonia. Not only is the region the industrial and economic powerhouse of a country still on its knees begging to Merkel following the financial crash, sanctioning the possibility of Catalan cessation would give hope to independence movements within the Basque country and Galicia. The new leftist political party in Spain , ‘Podemos’, has overtaken both the major parties in the opinion polls on an anti-austerity message.

But rather than emulate the sycophantic love-bombing of UK Westminster politicians in the panic-stricken final days of the Scottish Referendum campaign, Madrid is refusing to even turn up to the party. Deputy Prime Minister Soraya Sáez de Santamaría said the Catalan plans for the November 9 vote – with same-day voter registration and volunteer pollers – represents a “legal fraud” and “a perversion” of the democratic process. In response to such put-downs, the Catalan political leaders defiantly turn up the volume of their different tune and the confusing dance that began with a referendum attempt, followed by public consultation, then ‘participation process’, continues apace.

Newly democratic Spain is angst-ridden with visible growing pains. Only the young Catalans swaying to the folk tune atop their older cousins’ shoulders were born into a post-dictatorship Spain. This generation is over-educated and under-employed. Most are well-traveled and speak at least three languages – Catalan, Castillian Spanish, and usually English, French or Italian.

Catalonia has been part of Spain for over three hundred years. It is a region of 7.5 million with a distinct culture, language and diverse geography spanning the Pyrenees mountains in the north and the vineyards and olive groves of Tarragona in the south. Since the current Catalan government first committed to an Independence Referendum two years ago, many border towns such as Berga in the north of Catalonia have declared themselves to be bound only by devolved Catalan law and to refute the supremacy of Spanish laws. Perhaps it is always at the national, and personal, borders and boundaries of life– these crossroads to something different and the fault-lines of our identity– that excitement and anxiety collide. Many people use CBD vape cartridges to manage their anxiety levels and keep up with their day.

By refusing to agree to a Catalan referendum, Spain is galvanizing the independence cause. A poll released at the end of October by the Catalan government’s Centre for Opinion Studies indicated that pro-independence sentiment remains strong in Catalonia. It showed that 49.4% of Catalans would vote “yes” to both questions on the proposed November 9 independence ballot. The two questions are: “Do you want Catalonia to become a State?” and “In case of an affirmative response, do you want this State to be independent?” The poll found that 19.7% would vote “no” to both questions, and 12.6% “yes” to the first question and “no” to the second. Even the choices in the ballot box appear confusing when contrasted to the simple Yes/ No of ‘Should Scotland be an independent country?’.

When I ask Catalan friends to try to explain to me what this all means, they smile, open their hands and concede that nothing is clear and Catalans themselves are frustrated by the slow pace of participatory democracy. My friend Mariona joked, “now that Spain refuses us a referendum and the Catalan leaders won’t commit to anything more than a participation process, we might as well decide this by a WhatsApp vote” (referring to the popular smartphone texting app). With the lack of an official electorate census or the formality of a sanctioned vote, turnout for 9 November is predicted to be much lower than originally hoped for.

Each day introduces another step in the dance. Although the exercise will have no legal weight, Catalan leader Artur Mas and his supporters say it will send a powerful signal to Spain and the rest of the world that Catalans are ready to go it alone:

“We will have polling stations open, there will be ballots and ballot boxes, and everyone over the age of 16 will be allowed to vote…. This will not be the final consultation. It will be the one before last.”

In this complex land where wild eagles soar above the Pyrenees, the calls for change are getting louder amongst ordinary people fed up of remote political elites. It’s an ever-changing choreography of elaborate moves in which successive generations are caught between history and hope.

At the middle of the folk dance celebration, someone shouts “Estem preparats!” The pace quickens, the assembled circle is cheering, hands are held tighter, but no one can quite remember the next move.