a large printed picture, notice, or advertisement displayed in a public place.

The poster has long been a centrepiece of political communication. According to the French historian Max Gallo, “for over two hundred years, posters have been displayed in public places all over the world. Visually striking, they have been designed to attract the attention of passers-by, making us aware of a political viewpoint, enticing us to attend specific events, or encouraging us to purchase a particular product or service.”

The modern poster as we know it dates back to 1870 when the printing industry perfected colour lithography and made mass production possible. Since then it has been an extremely effective tool for war-time recruitment, persuasion, inspiration, motivation, vigilance and also, at times more cynically, to instill some form of guilt or fear on the general public. In 1914 Field Marshall Lord Kitchener argued that Britain would need an army far larger than the existing professional army, the British Expeditionary Force (BEF). Unlike their European neighbours, the British were opposed to conscription. For Kitchener, the solution was to raise an army of volunteers. From 7 August 1914, Kitchener’s ‘Lord Kitchener Wants You’ poster appeared across the country. The British Government had hoped for around one-hundred-thousand volunteers within the first six months. In the event, they got two million by the end of 1915 and the poster was seen as the driving force behind the success of the campaign.

The poster was designed by English graphic artist Alfred Leete and first appeared as a cover illustration for London Opinion, which was one the most influential magazines in the world. J. M. Flagg’s “I Want YOU for U.S. Army” poster was designed to recruit American soldiers in World War I. Based on the original British ‘Lord Kitchener Wants You’ poster, Flagg used a modified version of his own face for Uncle Sam, and veteran Walter Botts provided the pose.

Over four million copies of the poster were printed during World War I, and it was revived for World War II. ‘Beat the Whites with the Red Wedge’ is a lithographic Soviet propaganda poster designed by Russian artist Lazar Markovich Lissitzky. The intrusive red triangle symbolises the Bolsheviks, who are penetrating and defeating their opponents, the White movement, during the Russian Civil War.

Lissitzky was a leading figure of the Russian avant garde movement, designing a number of exhibition displays and propaganda works for the former Soviet Union. His work hugely influenced the Bauhaus and constructivist movements, and he experimented with production techniques and stylistic devices that would go on to dominate 20th-century graphic design.

‘Motherland Is Calling’ was illustrated by Irakli Toidze on the first day of the Great Partriotic War between Nazi Germany and the Soviet Union. After hearing the government radio announcement, his wife Tamara rushed into his studio screaming ‘War!’. Irakli then asked her to freeze and stay still so that he could draw her distinctive pose.

The poster became the ultimate symbol of the Russian war effort.

Espionage was a serious problem for the USA and its allies during World War II. The US government had a great need to alert its military and public to the presence of enemy spies and saboteurs lurking in American society. The “Loose Lips Sink Ships” poster was designed to warn people that small snippets of information regarding troop movements or other logistical details would be useful to the enemy and could easily compromise national security.

The poster was designed by artist Seymour Goff and was issued by the House of Seagram (Seagram Distillers) as part of their contribution to the ‘national victory effort’. In 1968, Paris saw workers and students protesting against the increasing levels of unemployment and poverty under Charles de Gaulle’s conservative government. On 16 May of that year, students and faculty staff occupied the Ecole des Beaux Arts to establish the Atelier Populaire (the Popular Workshop).

Atelier Populaire declared the posters “weapons in the service of the struggle… an inseparable part of it. Their rightful place is in the centres of conflict, that is to say, in the streets and on the walls of the factories.”

The organisation went on to produce hundreds of anonymous silkscreen posters in an unprecedented outpouring of political graphic art. When Argentine-born revolutionary Che Guvera was captured and executed in Bolivia by CIA-assisted forces, it was carried out in a manner so that there would be no memorial and no place of pilgrimage. This angered Irish graphic artist Jim Fitzpatrick who created an ubiquitous high-contrast illustration based on an original photograph by Alberto Korda. By making the illustration copyright free, he made sure that it went on to receive broadest possible circulation so that his memory was never forgotten.

The poster became a worldwide phenomenon and the iconic image of the anti-Vietnam war protests. Today, it is also the symbol of F.A.R.C. in Columbia and the Zapitistas of Mexico in their fight for freedom and autonomy. 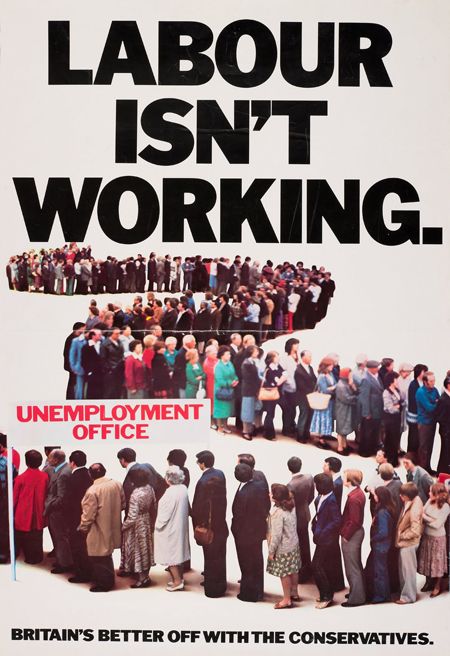 “Labour Isn’t Working” was a political advertising campaign commissioned by the Conservative Party during the run-up to the 1979 general election. The campaign poster, which depicts a long snaking dole queue outside of an unemployment office, was designed to highlight rising UK unemployment levels under the watch of James Callaghan’s Labour government.

The campaign was a success with the Conservatives winning the election and party leader Margaret Thatcher becoming Britain’s first female Prime Minister.

In 1999, Campaign voted the poster, which was designed by Saatchi & Saatchi, as the “Best Poster of the Century”. Barack Obama’s ‘Hope’ poster was designed by Shepard Fairey, an American contemporary graphic designer and illustrator. The poster – which consists of a stylised stencil portrait of Obama in the patriotic colours of solid red, white and blue, with the word “Hope” – was widely described at the time as ‘iconic’ and later became synonymous with the 2008 Obama presidential campaign.

During the campaign period Fairey distributed 300,000 stickers and 500,000 posters, funding his grassroots electioneering through poster and fine art sales.

In 2009, Fairey lost a legal battle with Associated Press and agreed to pay them $1.6 million in compensation after he admitted that the poster was based on one of their photographs. He was later given two years probation and fined $25,000 (£15,000) when he was found guilty of attempting to hide evidence. Anti-consumerist group Adbusters created the “Occupy Wall Street” poster as a call for protest against perceived social and economic inequality, greed, corruption and the undue influence of corporations on government – particularly from the financial services sector.

The poster, which asks “What is our one demand?”, features a dancer posed on the shoulders of the Wall Street bull statue with a foggy clamour of demonstrators behind her. Activist groups seized on it, as did the hacktivist group Anonymous, and a collective began to form.

—
In January we launched Icon, an exciting new project designed to inspire a universal, iconic image for the historic Yes campaign for Scottish independence. With the most exciting political period for centuries fast approaching Scotland, now is the time for the country’s creative community to get involved.