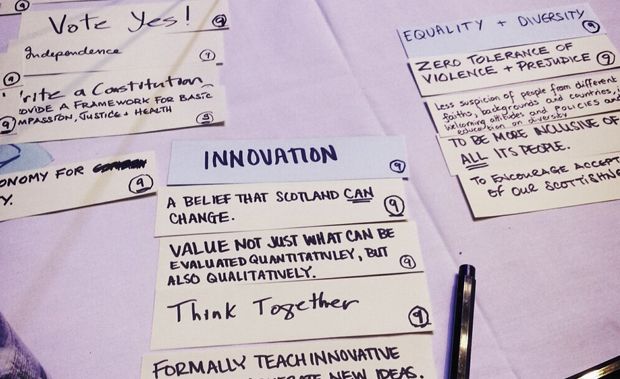 Thinking, imagining and attempting to create the future, and embracing and encouraging change, comes naturally to human beings.

We do these things everyday in numerous ways throughout our lives, subconsciously and unconsciously, usually without reflection or realisation. Recognising that we do is one of the first steps in demystifying these terms, democratising them, and taking them back from the consultancy class and from managerial jargon.

When I first saw Say So Scotland’s initiative to develop a Citizens’ Assembly I was initially wary, thinking it was ‘civic Scotland’ out on maneouvres. This looked like a kite flying exercise, post-SCVO’s ‘The Future of Scotland’ – something which has up until now been of limited impact. This perception was strengthened by the fact that the event would take place at SCVO’s ‘The Gathering’, the umbrella for lots of voluntary organisations showcasing themselves each year.

It turned out to be exactly the opposite. It was a self-organised, people-created and run initiative, borne and situated in ‘unofficial Scotland’ and organised by a group of motivated individuals.

Here is why it was different. It was brought together for very human reasons, with love, empathy, commitment and idealism. It was imbued with a sense of wanting to bring difference and change, to create a vibrant safe space for deliberation and dialogue, and for daring to dream of a future which diverges from ‘the official future’.

It wasn’t about other motivations. It wasn’t shaped by the endless calculations of institutional Scotland, driven by anxieties and concerns over mandates, turf wars and positioning for access and influence.

My first one-to-one encounter with some of the community of the Citizens’ Assembly, the people who gave of their time and skills, on a training evening, was impressive. There was a selfless commitment, passion and humanity here; and while it was mostly middle class, it was a good mix in ages and backgrounds, even nationalities, and not captured by one perspective such as community development or education.

When I came to the day itself of bringing together a Citizens’ Assembly, I noticed a mixture of steel and softness, and very different kind of leadership and authority. The last two were held collectively and shared, with a real sense of purpose, commitment and calmness.

The day was an intense one for all concerned. It drew directly on the Icelandic experience of remaking their constitution and politics from the bottom-up after the crash. It brought together a cross-section of Scots to begin a dialogue about the future of Scotland, to explore different values, think about what kind of action and society we want, and how we get there.

I heard over the day detailed, passionate conversations and exchanges, with lots of thoughts and a lot of listening, with people asking about the state of our society, economy and democracy, talking about lack of trust in politics, politicians and public institutions, and address ‘big issues’ such as Trident in the Clyde, and Weapons of Mass Destruction. Fascinatingly given the independence debate, references to this, pro or anti, were few or far between.

It was a revealing, compelling day and an interesting start of what will hopefully be a longer, deeper set of processes. If this were to occur, then it would be good to note some of the challenges ahead. First, the day was in terms of the participants who turned up, nearly exclusively connected, entitled Scotland. They were middle class, middle aged and nearly entirely white. Who was entirely absent was disconnected Scotland, the people who feel they have no voice, influence or power in society and have shut off from politics, or more accurately, been shut out by the system. I felt across the many discussions that no one really noted or felt passionately about this fact, that literally half of Scotland is missing from our public deliberations and affairs. And that is a statement of how deep that chasm of dividedness has become in our society.

Second, I did feel a slight disappointment at the concluding visions of a future Scotland because they were for the most, soft, alternative-ish, centre-left, green-influenced, going on about ‘sustainability’ ’social justice’ and ‘community’. There was little edge, anger or awareness of competing visions or interests. And there was no sense of how we were going to get to this if that is what this bit of Scotland wanted to. I did like the one vision that stated, ‘My Scotland is beautiful and thriving’ that seemed to capture the personal connection and humanity missing from large parts of our public life.

Third, the difference between Iceland and Scotland is important in all this. Iceland experienced a systems crash as a society, whereas Scotland for all our difficulties, inequalities and bankers crash, has not. There is across most of Scottish society, a sense of continuation and preservation: some taking the form of opposition to Westminster reforms; others, supporting independence or romanticising ‘civic Scotland’. We are not at the crunch point of embracing far-reaching new thinking.

I wouldn’t want to be anything other than positive and supportive. A potentially important process has been opened, and in a country with a culture of undemocracy and unspace (the dominance of official voices and agendas), something interesting has happened.

Some of the challenges which the first Citizens’ Assembly faced such as the way society excluded and marginalises missing Scotland and the absence of a fully-fledged alternative to the economic and political status quo, are deep seated, and beyond the course of a day to solve.

And while Scotland isn’t Iceland, the status quo has clearly failed in Scotland and the UK. The forces of power and privilege across the UK may be intent on driving forward even more unpalatable, unjust policies which punish the weak and vulnerable, but Scots need to be for more than just against these proposals. Scots need to examine their progressive credentials, and ask themselves in what way are we that caring, compassionate and concerned, in a society disfigured by inequality? In what do we embody and enact the egalitarian, social justice values many Scots claims as their own.

Asking ourselves difficult questions, challenging our own vested interests and the narrow contours of ‘official conversation’, takes time, energy and courage. It takes human qualities and talking a human language: all of which were on display in the making and playing out of the Citizens’ Assembly. Well done to everyone who made it possible, and for taking a first step in creating a very different Scottish future…

Gerry Hassan is a writer, commentator and advocate for social change who has lead numerous futures projects.
gerryhassan.com