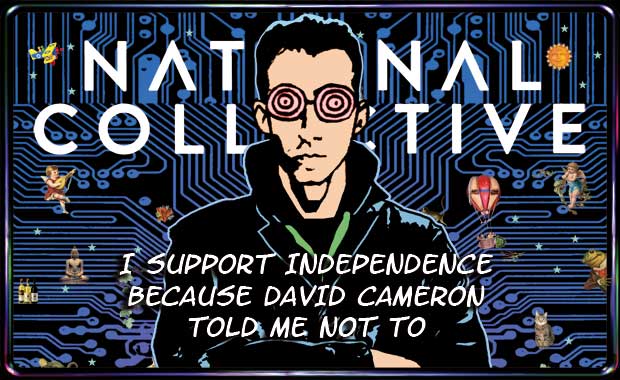 I’m not normally this childish. Admittedly, I called Alistair Darling ‘a big knobby’; the organisation he fronts ‘the U-koks’; weird little xenophobe Nigel Farage (a French name if ever I’ve heard one) ‘a grisly hobgoblin’; and said that the greatest of all reasons for a Yes vote was Michael Gove.

Then I tried to sell the UK’s nuclear submarine fleet on Ebay, compared Trident unfavourably to a Betamax video recorder, and began negotiations with Shetlanders over chipping the nukes to lock onto Holyrood. Therefore it could be said that I have not always debated the independence issue in an adult manner.

Something about Westminster government brings it out in me. Not just this particular plague of straights, but Westminster governance in general. I know that I should really try harder to be a sad, unimaginative and frightened drone in order to fully appreciate Westminster’s vision of a 21st century UK. But I’m obviously just not mature enough yet.

Were anyone foolish enough to ask me to name my favourite author, I would have to give it some serious thought. Choosing between Tolstoy, Dostoevsky, Chekhov, Shaw, Hemingway and Lawrence would be tough. But of all the greats, I’d have to say Dr. Seuss tops my list. What with Cindy Lou Who, Thing One and Thing Two, and all the dizzards and diffendoofers, the man towers above all those other beardy losers. Honestly, the only time I’ve had more fun was when Iain Gray went to Subway.

Mirroring my literature of choice, every day it seems I am faced with more and more reasons to react to Westminster politics in a childish manner. Yesterday, David Cameron discussed the small matter of the UK having been shot to hell by his appalling mismanagement, and quoted Lady Thatcher in saying: “There is no alternative.”

Now, a grown-up might respond with something like this: Since when is there no alternative in politics? Politics is all about alternatives. There’s no alternative for you because that would mean admitting that your failed austerity measures were just ideological excuses to trash the state. And anyway, here in Scotland, there is an excellent alternative. It’s called independence.

But, as one who refuses point blank to wear a cardigan, I would probably say this instead: You’re so desperate to be the Iron Lady, any minute you’ll don a navy dress suit and swan around with a handbag barking orders like a psychotic Cilla Black.

So when National Collective begged me to produce a poster for their ongoing ‘I am National Collective’ campaign, and I had to state “I support independence because..” it was a major dilemma. Obviously, now I remember that I support independence because it’s the only way to create a more fair and equal society with decisions made by the people who live here. But at the time, because of Westminster,  I could only come up with incredibly childish and petty reasons, such as:

I support independence because I want to see David Cameron’s face when it happens.

I support independence because Westminster was messed up even before Nigel Farage arrived.

I support independence because secessionist trouble-making Jocks are the way ahead.

In the end, I went for the comparatively grown-up ‘I support independence because David Cameron told me not to.’ And I hope you agree, it’s a quondupler.