In 1964, Hamish Henderson and Hugh MacDiarmid engaged in their second, and most important, round of “flytings” – intense but respectful poetic competitions between Scottish makaris. Through correspondence in the Scotsman, what began as a discussion of the worth of Scottish folk song became a fiery argument about the role of the artist and thinker in society, which Henderson described as “taking on with every letter more and more of the high mottled complexion of a Celtic flyting.” Macdiarmid insisted that real culture resides in the intellectuals, whose interests are identical to those of the masses, because the function of the creative artist “is the extension of human consciousness.” Henderson, however, believed that true culture arose in the people. This exchange took place through public correspondence.

As the voice of artists in the independence campaign, we want to continue that journey to discover the role of the artist and thinker in a movement. As long as we are concerned with art, we are concerned with the human, and therefore more with the public sphere than the political sphere. As both MacDiarmid and Henderson would agree, “the interests of poetry are diametrically opposed to whatever may be making for a robotisation or standardisation of humanity or any short-circuiting of human consciousness.”

The question we are left with, though, is where the human and the artistic lies in relation to the political sphere. Should it discover the artistic political sentiment in the people, as when Henderson, in one of his typical anecdotes, describes a young electrician he met from Florence who quoted Dante to him: “Freedom he is seeking, which is so precious – as they know who give up their lives for it”? Or is the political role of the artist to speak to and for the people in a movement?

To broach this question, within our collective of artists and creatives, we are beginning our very own inter-city “Flytings”. Flytings is an attempt to build a public sphere of correspondence, about ourselves and our movement. We want to get rid of the dichotomy between the private sphere, where we know each other as individuals, and the political sphere, where we know each other as activists, and create a public sphere, where we create and understand each other as citizens in Scotland. And at a time when political debate is polarised and even acrimonious, we want to meet as friends. This can best be done through meetings and public correspondence.

So how will it work?

Our model is one of correspondence between cities: initially between Glasgow, Edinburgh and Aberdeen. We are a tiny Republic of Letters. Maybe we can eventually correspond across borders, or oceans…

The first meeting will be in Edinburgh. Glasgow will meet the next week, and Aberdeen the week after that. Each meeting will respond to a set of tasks given to them by the previous meeting, and they may answer them through any medium they choose (writing, photography, drawing, singing, acting)

The tasks might involve considerations of political practice or theory, the creation of a piece of artwork which portrays an idea, discussion of a set piece of art or photography, or guest speakers. Each meeting will be documented well, in order that ideas can be exchanged between cities, and across borders. Responses will be posted on the National Collective website.

In this way, we will build our own discourse through stories, ideas, conversations, places, films, photographs and songs. We will invite artists, writers and thinkers to talk to us about the process behind their work.

What do we seek to achieve?

We want to learn from each other, and teach each other, through dialogue. Paulo Friere said in his Pedagogy of the Oppressed that “some may think that to affirm dialogue—the encounter of women and men in the world in order to transform the world—is naively and subjectively idealistic. There is nothing, however, more real or concrete than people in the world and with the world, than humans with other humans.” We want to work with this idea, in the context of a movement that, by the nature of political campaigning, naturally becomes depersonalised, and dehumanised.

This brings us another function of Flytings: to be a more self-reflective part of the independence debate – it can examine the main arguments, critique them, see what’s missing and what can be built upon. Any movement needs this critical self-reflection; without this, it is just a campaign. The creative side of National Collective is the side that eschews party politics; we attempt to appeal not to ideas of the Scottish state or nation but to the more human ideas of creativity, individual and collective potential, and creative autonomy.

Look out for the first sessions in each city, which will be posted on the National Collective website. 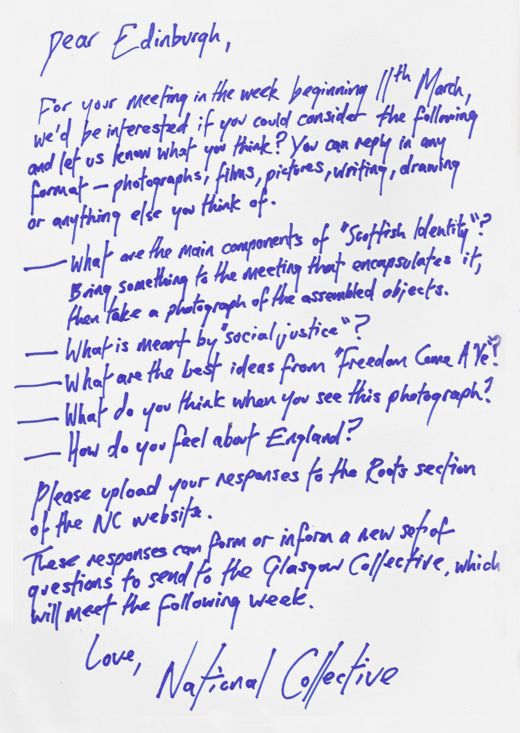 A Republic of Letters

For your meeting, we’d be interested if you could consider the following and let us know what you think? You can reply in any format – photographs, film, pictures, writing, drawing or anything else you think of.