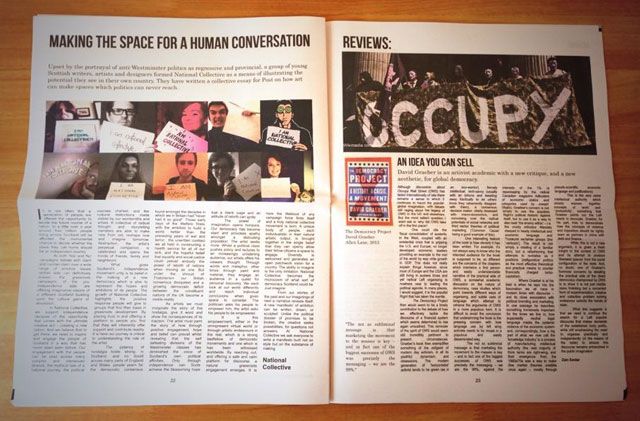 This collective essay was published in the first edition of POST magazine as an introduction to our manifesto. Unlike a political dossier of promises that can be broken, it will imagine the possibilities for an independent Scotland.

MAKING THE SPACE FOR A HUMAN CONVERSATION

Upset by the portrayal of anti-­Westminster politics as regressive and provincial, a group of young Scottish writers, artists and designers formed National Collective as a means of illustrating the potential they see in their own country. They have written a collective essay for Post on how art can make spaces which politics can never reach.

It is not often that a generation of people are offered the opportunity to decide the future course of a nation. In a little over a year around four million people living across Scotland will be afforded the monumental chance to decide whether the place they call home should be an independent country. As both ‘Yes’ and ‘No’ campaigns debate with claim and counter-claim over a wide range of emotive issues neither side can definitively answer, the grassroots campaigns of the pro-independence side are offering imaginative visions of a different Scotland building upon the cultural gains of devolution.

In National Collective, we support independence because of the opportunity that comes with the ultimate creative act – creating a new nation. And we believe that to get there, we need to inspire and engage the people of Scotland in a way that has never been seen before. Our engagement with the people can be read across many complex and interwoven strands, the mythical tale of a national journey, the political courses charted, and the cultural distinctions made visible by our wordsmiths and artists. A collective of radical thought and storytelling narrators are able to make new from old, reshape now and imagine tomorrow. Abstraction, the artist’s perpetual companion, is celebrated and opens the minds of friends, family and neighbours.

What gives Scotland’s independence movement unity is its belief in the making of a new democracy which is able to represent the hopes and ambitions of its people. The growth of National Collective highlights the positive response people will give to groups that find their basis in grassroots development. By placing trust in and offering a platform to people you find that they will inherently offer support and contribute readily. It is here our journey is critical to understanding the role of the artist.

The potency of nostalgia holds strong. In Scotland, and no doubt across many parts of England and Wales, people yearn for the democratic consensus found amongst the decades in which we in Britain had “never had it so good”. Those early days of the Welfare State; with the ambition to build a world better than the preceding years of war and terror; the unwritten contract we all held in constructing a health service for all of our sick; and the hopeful belief that equality and social justice could prevail embody the power of rebirth of nations when moving as one. But under the shroud of Thatcherism our British consensus dissipated and a growing democratic deficit between the constituent nations of the UK become a visible reality. As artists we must invigorate the story of this nostalgia, give it word and show the consequences of its inaction. The artist must paint the story of how through positive engagement, hope and belief can prevail whilst revealing that the self-defeating divisions of the Westminster classes has diminished the voice of Scotland’s own political affinities. Only through independence can Scots achieve the blossoming hope that a blank page and an attitude of rebirth can ignite.

The power of imagination opens horizons. Our democracy has become staid and provokes apathy amongst a distrusting population. The artist seeks more. Whilst a political class pushes policy and lectures to an increasingly unlistening audience, our artists offers his viewers thought. Through words and metaphor, other times through paint and material, they engage an audience in a quest for personal discovery. We each look at our world differently and reach individual conclusions when given space to consider. The politician asks his people to empower him, the artist asks his people to be empowered. It is this empowerment, either in the omnipresent virtual world or through artistic endeavours in the real, which is a strong bedfellow of democratic movements and one which is has been witnessed worldwide. By reaching out, and offering a safe and calm platform for discourse, a natural grassroots engagement emerges. It is here the lifeblood of any campaign force finds itself and a truly national collective movement is born. A unique body of people, each individualistic in their natural artistic output, is brought together in the single belief that they can openly allow their fellow citizens a space to engage. Diversity is welcomed and generates an open patchwork vision for a country. The ability to imagine is the only limitation. National Collective becomes the microcosm of what sort of democracy Scotland could be. Just imagine.

From our stories of the past and our imaginings of next a narrative reveals itself. A new ‘manifesto’ of ambition can be written, drawn, or sculpted. Unlike the political dossier of promises to be broken, the creative seeks possibilities, for questions not answers. At National Collective we ask everyone to write a manifesto built not on style but on the substance of making.