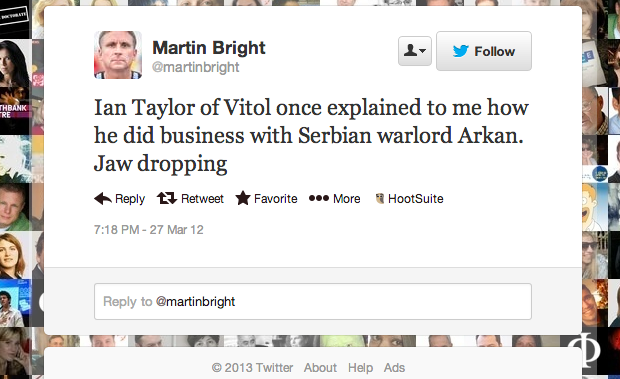 Ian Taylor “explained” “how he did business” with Arkan, a notorious Serbian war criminal, according to a leading journalist. Martin Bright described the conversation with the No campaign donor as “jaw dropping”. Bright, who has worked at the BBC, The Guardian and The Spectator, said that Taylor spoke to him regarding Vitol’s transaction with the hit-man. Arkan was indicted for 24 crimes against humanity.

This raises fresh questions over whether Alistair Darling was aware of Taylor’s business history when they met. Taylor donated £500,000 to the No campaign after his meeting with Darling.

Ian Taylor of Vitol once explained to me how he did business with Serbian warlord Arkan. Jaw dropping

In April, National Collective was the first to report on a series of dodgy deals involving Vitol plc, the company of which Taylor is CEO. In response to this reporting, Taylor’s lawyers threatened to sue National Collective, as well as The Herald and Wings Over Scotland who followed up on the story.

Taylor’s company was convicted of grand larceny in US courts, avoided UK tax, and skirted sanctions on Iranian oil. Taylor was also part of the ‘cash-for-access‘ scandal.

Bright’s comments link Taylor to his company’s $1 million fee to the Serbian paramilitary. Labour MP John Mann previously described Taylor’s donations to the Conservative Party as “dirty money” and accused Vitol of “backing corrupt regimes”. Former Labour First Minister Henry McLeish questioned “whether this was the type of money we want in the [referendum] campaign.”

Alistair Darling, head of the campaign against independence, met with Taylor prior to the £500,000 donation. Unlike his Labour colleagues, Darling stood by Taylor’s donations.

However, Darling has not disclosed the nature of his discussions with Taylor. With further evidence now in the public domain regarding Taylor’s business practices, this raises a number of questions.

This is an issue of transparency and of corporate responsibility in the gravest of circumstances.

Paddy Ashdown, the Liberal Democrat peer who was responsible for pursuing war criminals in the former Yugoslavia, condemned the donation.

National Collective contacted Alistair Darling’s office yesterday. So far he has refused to comment. We have also spoken with Martin Bright, who has confirmed that Ian Taylor stated that he, Taylor, did business with Serbian warlord Arkan.

In response, Vitol plc say that their actions in Serbia were not illegal, that their tax arrangements are legal and they were fully compliant with laws governing trade with Iran. Ian Taylor’s lawyers say his donations are proper.