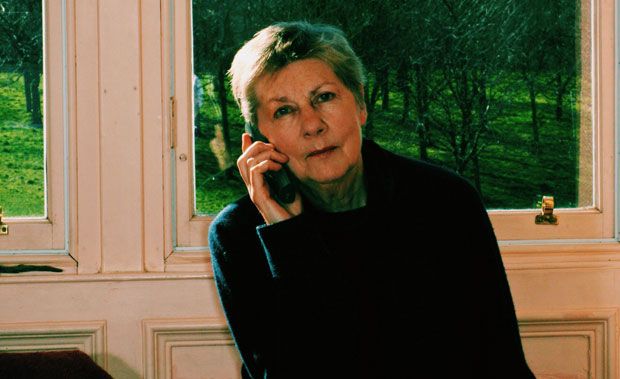 Tessa Ransford has been an established poet, translator, literary editor, reviewer and cultural activist on many fronts over the last forty years, having also worked as founder and director of the Scottish Poetry Library. She initiated the annual Callum Macdonald Memorial Award for publishers of pamphlet poetry in Scotland, now in its fourteenth year. She spoke to Jenny Lindsay of National Collective about her visions for an independent Scotland and why she believes the arts have such a big role to play in the referendum.

National Collective: What has led you to support independence for Scotland?

My twenty years of work for the establishment and development of the Scottish Poetry Library, from 1982 to 2000, made me aware of our subservience to direction and policy from Westminster in Scotland, in the media, in schools, the universities, in our civic institutions, in everything large and small, and, of course, in literature. Existentially I believe in a balance of self-determination and involvement. In a poem of Rilke’s I have translated he writes:

It is no presumption to play a part
in the complex ceaseless weaving of
Life’s patterning, ever more intricate –
to be carried along is not enough.

Steven Rose in Lifelines writes of his theory of autopoesis: ‘all living forms are active players in their own futures’.

Patrick Geddes gave us the tag ‘creando pensamus’ which I had written in light on the inside of the door of the new building for the Scottish Poetry Library. It means ‘by creating we think.’ To think is a poetic activity. Other forms of thought are not poetic, such as analysis and calculation. The Germans talk of ‘dichten und denken’ (thought and poetry).

I don’t remember ever not wanting independence for Scotland, (though I have never joined a political party) but it has to include independence-mindedness within Scotland and an overcoming of ‘learnt helplessness’ as the best option.

How important do you feel the arts are in terms of shaping the debate on Scotland’s future?

It was the arts which kept alive a sense of Scotland in the eighties and nineties after the spoiled 1979 referendum. Literature is the essence of a society. It is what we carry around within us wherever we go, but it needs a milieu, a tilth in which it can grow and blossom (to use Lesley Riddoch’s word). We need cultural ecology to allow the variety of genres to grow and interact beneficially with each other and with all aspects of life. Literature shouldn’t be in a bubble unconnected with daily life. We should build up a new and confident modern literary publishing industry with a strong emphasis on translation between the languages spoken in Scotland today and on foreign languages.

However, during that period, we had to struggle to win acknowledgement of the existence of such a thing as Scottish literature. Many academics in Scottish universities actively blocked attempts to set up courses in Scottish literature. There were no professorships. Schools, libraries, bookshops, did not stock Scottish literature. There was ‘Scottish Book Week’ in bookshops for two weeks of the year! The only recognised Scottish poets were those published and promoted in England. Such poets considered it ‘literary suicide’ to be published in Scotland. Yet this was in an era when legal, medical, educational and theological publishing thrived in Scotland. Notwithstanding, the founding of the Scottish Poetry Library, the Scottish Storytelling Centre, the Bibliography of Scottish Literature in Translation and more and more students, often from abroad, wanting to study Scottish history, literature and art, all began to open minds to the reality of Scotland in itself. The infrastructure of cataloging, indexing and making bibliographies made further research and study possible. The work of the School of Scottish Studies was also vital. Emily Dickinson wrote ‘I dwell in possibility’ and Rilke ‘To ashes often turn our flaming hopes / yet art can set on fire our very dust.’

How do you imagine a future Scotland?

I’m much encouraged by the bringing back of the concept of the Common Weal by the Jimmy Reid Foundation. I imagine a Scotland as a happier place for women and children, with better parks and supervised play areas and integration of women as thinking beings contributing and sharing in all activities of society. Likewise there will be no ethnic or age discrimination, but jobs for the young should be a priority. We’ll develop renewable energy sources and train up inventive engineers and technicians. I believe passionately in free education in school and university, but a place for a diversity of such institutions.

I think there is no need for inflated salaries: there should be a maximum as well as a minimum wage. We shouldn’t prostitute our country to tourism, but create a land-system where the inhabitants can themselves live and work and be housed.

We will be international, directly represented from Scotland in Europe and beyond. Our students will have placements to study in Europe and Scandinavia. We will have an army only for peace-keeping purposes and a navy for patrolling our coasts. We won’t have Trident, or nuclear power, or the monarchy.

Festivals will be in order to harvest the work which is being done. Decisions will be made locally with representatives at higher groupings. Those living in Scotland will be encouraged in job opportunities. We will keep our own publicly-owned health service, post office, water, transport and energy. We will own our own coastal resources and revise the land-tax system. Finally there will be a system for providing some kind of living wage for writers, musicians. actors and artists, integrating them into a life of ‘practicing the arts’ in the sense of having a practice like a doctor or architect; practice as well as theory, and practising in the sense of continuing to develop their art, rather that endlessly pursuing funded ‘projects’.

What brought you towards the cultural campaign for independence?

I heard about National Collective through Facebook and was delighted to think such a movement was happening, particularly as it involves designers, artists, writers, musicians and all those who work creatively. Actually I think all our work should be done creatively and I don’t separate off ‘creativity’ as a special packet. But on the other hand it is a desperately difficult business to make a living by practising as a creative artist in any field. I was keen to find a way to contribute.

My soul there is a country my parents used to know
a country sore and sorry reaching for a better world
they humped the coal and cleaned the grate
they queued in shops and trudged the windy street
they hoped, believed, encouraged,
were witty, kind and good.

My soul is there a country now
which they would recognize?
The way we live more comfortably
with electronic systems;
the way we mix and marry and
swop our children round;
the way we travel freely
and communicate, no waiting
for replies, no longing, searching,
as there used to be, no aching;
cars and wars still multiply
with cruelty and stupidity
as we fail to learn, despite
the information revolution,
what we need to know for real:
what makes the commonweal.

My soul there is a country you may visit in the future
when women will be happy and playgrounds will abound
when animals are understood and sharing is rewarded
when jets have gone and lorries
cities are for local markets
when land is allocated so that all can grow some food
when learning is provided by those with skill and reason
and stories keep us wise,
the old are not neglected and the young are not exploited,
a world of human kindness
we do know how
we know we must allow.