Ron Burgundy: I saw that. Brick killed a guy. Did you throw a trident?

Brick Tamland: Yeah, there were horses, and a man on fire, and I killed a guy with a trident.

The above lines, taken from the 2004 Will Ferrell comedy Anchorman, are particularly relevant at the moment. Not just because of the hilarious sequel Anchorman 2: The Legend Continues being released last month.

A fair bit of news has been floating about regarding the UK’s insistence on renewing the Trident nuclear weapons system, and the safety of the system more generally. Firstly, there was the news that police officers working for the Ministry of Defence are being investigated after claims they failed to carry out routine inspections of the nuclear weapons factory in Berkshire, with a spokesperson having to deny reports that they were found sleeping on duty. To quote Catalan author Pere Calders from his story The Spiral, “It is indeed reassuring to see a great democracy taking such care to avoid unnecessary loss of life.”

This was followed up with the news from James Arbuthnot, former Conservative Defence Minister, voicing his concerns about the necessity of renewing Trident. He said:

Nuclear deterrence does not provide the certainty that it seemed to in the past. It’s not an insurance policy, it is a potential booby trap.

Nuclear deterrence is essentially aimed at states, because it doesn’t work against terrorists. And you can only aim a nuclear weapon at a rational regime, and at rational states that are not already deterred by the US nuclear deterrent. So there is actually only a small set of targets. With the defence budget shrinking, you have to wonder whether [replacing Trident] is an appropriate use of very scarce defence sources. You have to wonder whether nuclear deterrence is still as effective a concept as it used to be in the cold war.”

In the same article in The Guardian, Professor Malcolm Chalmers, director of research and defence policy for the Rusi thinktank, is quoted as saying:

The UK would not become a nuclear-armed state now if it were not one already. With the end of the cold war, the UK is situated in one of the more secure parts of the world, is surrounded with friendly states, and enjoys a close [military] alliance.”

The arguments being made by these two contributions to the debate are indicative of how the security threats in the modern world should be faced. Yes, there are risks to be averted in the modern world, as much as there was in the cold war. But these increasingly, as we are all too aware, do not come so much from states, but from terrorist organisations, cells, or even individuals. As we saw with the tragic events of 7/7 and 9/11, nuclear weapons do not provide a deterrence against attacks from these types of organisation. This can be taken further to look at the example of the Falklands War, and how British territory was invaded by Argentina despite the nuclear weapons that the UK maintained at that point in time. The ‘deterrent’ didn’t work then, doesn’t work now, and doesn’t provide valuable defence against any sort of threat that the UK, or any country for that matter, faces.

The recent negotiations between the P5+1 and Iran over Tehran’s potential for developing nuclear weapons shows the way forward. It isn’t any use to obsess over hosting weapons of mass destruction and power. The real way forward is diplomacy and discourse, and it works. The risk of nuclear oblivion that comes from mistake, miscalculation or misunderstanding is too great for any of us to feel truly secure with nuclear weapons sitting just thirty miles or so from our biggest city. Furthermore, it robs us of vital resources to tackle the root causes of the threats that face us in the modern world – namely poverty, inequality and environmental degradation which can be seen to contribute in many areas to political and religious extremism. Trident is simply diverting vital capital resources away from fighting the real security issues that face us, and will increasingly do so over the next 30-40 years. Spending up to a thousand million pounds on nuclear weapons over the same time period does very little to protect us from the threats that we currently face. Rather, it simply encourages other states to develop similar weapons systems, further destabilising global security.

So, what hope do we have that a future UK will abandon its nuclear weapons programme? There is a simple answer to this question, and it is ‘none’. We saw the intentions of the Westminster government to press ahead with renewing Trident submarines, as revealed in The Telegraph. For any hope of bringing about UK nuclear disarmament, and all the benefits that come with it in terms of helping to build a more peaceful, secure, and ultimately modern, world outside of the shadow of the Cold War, Scotland simply has to vote Yes this year.

It is about more than just improving Scotland, or allowing us to benefit from the removal of the risk of having nuclear weapons in our waters. Independence forces the UK Government to make a decision about their continued hosting of nuclear weapons, as this handy graphic shows: 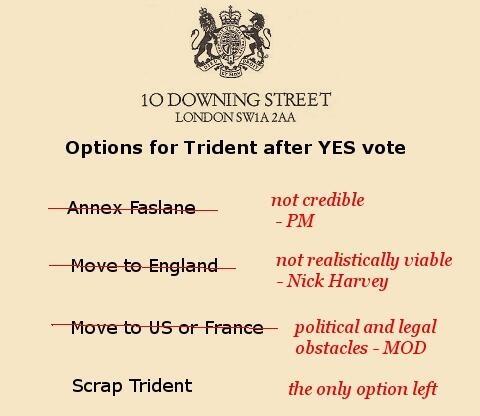 We know that with the full powers of an independent Parliament, with control over defence and foreign policy, Scotland would have the ability to pursue a more ethical foreign policy than that that has been followed by the UK. But independence will also force the UK to reevaluate its own foreign policy agenda, from the potential position of being a non-nuclear state for the first time since 1952.

Removing nuclear weapons through Scottish independence won’t necessarily weaken this island’s position in the world, but strengthen and modernise it by showing to the rest of the nuclear armed states that there is another way forward. Diplomacy has worked in the recent past and can prove to be the only grounding for developing a more peaceful and secure world. We have a one-off opportunity in September to ensure that Scotland can be part of building this.

Although Brick Tamland renews his love affair with his trident in Anchorman 2, Scotland (and the rest of the UK) shouldn’t do likewise.