It’s a late but welcome phenomenon: progressive voices in England adding their support for Scottish independence. At the start of the campaign there was only a trickle of interest and engagement. Yet recently more journalists and columnists from England have stated that independence is an opportunity for the whole of Britain. It’s an opportunity for power to be distributed more equally. It’s an opportunity to devolve decision making to the regions of England. It’s an opportunity for Scotland to lead the way with a modern constitutional settlement. On the day of Cameron’s speech there were numerous voices online echoing this sentiment. I even received an email of independence solidarity from Wales! Here’s a few such voices. (If there are any others I’ve missed post them in the comments!)

A group of English writers and campaigners wrote to the Sunday Herald explaining their support for Scottish independence.

They said “we are writing to ask Scotland to ignore a Prime Minister most of us didn’t vote for either, to take this once-in-a-lifetime opportunity and to vote Yes in September.

We don’t see or fear Scottish independence as separation, we look forward to it as a better way of living together.”

Andrew Marr: Are you pro-independence for Scotland?

Natalie Bennet, Leader of the Green Party in England and Wales: “Very much so. In terms of the broader European Union, we need to respect the principle of subsidiarity. We need a reformed European Union where people take decisions locally.”

George Murdie, Labour Member of Parliament for Leeds East said “If I were in Scotland I would be voting for an independent Scotland.”

Sir Michael Atiyah, scientist and former President of the Royal Society of Edinburgh and London, said that independence is a huge opportunity to create a more peaceful world. He described nuclear weapons as “conspicuous, useless, immoral and expensive symbols of Westminster’s hankering for imperial grandeur“.

Simon Jenkins, Head of the National Trust and Guardian Journalist, said “If the Scottish referendum does indeed force the absurdity of Britain’s nuclear deterrent out into the light of day, it is worth it for that alone. If it were to go further and kill Trident stone dead, it would be thank you, Salmond, thank you, Scotland.”

Russell Brand, actor, comedian and writer, said “They don’t have any control over their own policy or economy that have a negative social impact, so why would Scotland stay under UK rule?…The only reason I would endorse Scottish independence is because the more there is devolution, the more power structures break down, the more power will hopefully reach people that matter – us, normal people.

Increasingly it’s clear that what would be best for the Scottish population would be to have independence and autonomy.”

Tariq Ali, British-Pakisani writer and activist, 10th March 2014: “an independent Scotland, a small state, has far more possibilities of real, genuine internationalism.  That means establishing direct links with many countries and peoples in the world.

Anthony Barnett, founder of openDemocracy, 7th February 2014: “Now that Cameron has called on us English to tell the Scots not to leave us and ‘vote’ no it is time for us English say, “please say ‘Yes'”, we will be better together with independence, as yours’ obliges us to seek our place in the world, together with you, naturally. Our joint problem is the Westminster/Whitehall integument of ‘Britain’.”

Billy Bragg, singer and equality campaigner, 7th February 2014: “I’m in favour of Scottish independence because I believe that it is ultimately about accountability, as is socialism. If the Scots leave, we in England will need to make some big constitutional changes. If a new English parliament or regional assemblies are created, they will surely use proportional representation and, as a result, we will have greater choice at the ballot box.”

Johnathan Freedland, Guardian columnist, 7th February 2014: “It’s not that the Scots are leaving Britain – it’s that Britain has left them… So I no longer dismiss the Scottish yearning behind yes. If I were a Scot, I might well be leaning that way myself.”

Ian Martin, comedy writer with Veep and The Thick of It, December 2013: “I really want Scotland to go for it. Those of us who live in the north of England look south and see the same thing. An England effectively shrunk to the Greater London area…Scots, I implore you. Strike out. And at least take some of us with you.”

The Artist Taxi Driver, youtube political commentator: “Scotland has a chance…run! Run! Run for your lives!…As a small nation you have a chance to be more equal.”

John Harris, author and curator of The Guardian’s ‘Anywhere but Westminster’, 25th November 2013: “if I had a vote in Scotland I would, with a mixture of trepidation and enthusiasm, vote in favour of independence. Hope rather than fear, and all that. But also something much more fundamental: a chance for at least one part of these islands to exit a decayed consensus, and beat a path towards something better.”

George Monbiot, Guardian columnist and author: “I would vote yes in September if I lived here, on the grounds that it presents an opportunity to do something new, and I furiously hope, despite the evidence, that an independent Scottish government will take it.” And on the day of David Cameron’s speech twitter was flooded with messages of support for Scottish independence from across the UK. 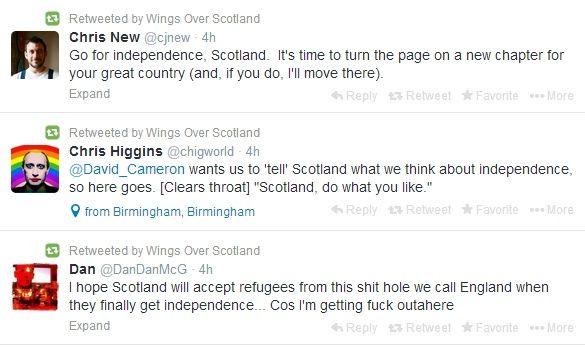 Tweets compiled by Wings Over Scotland.