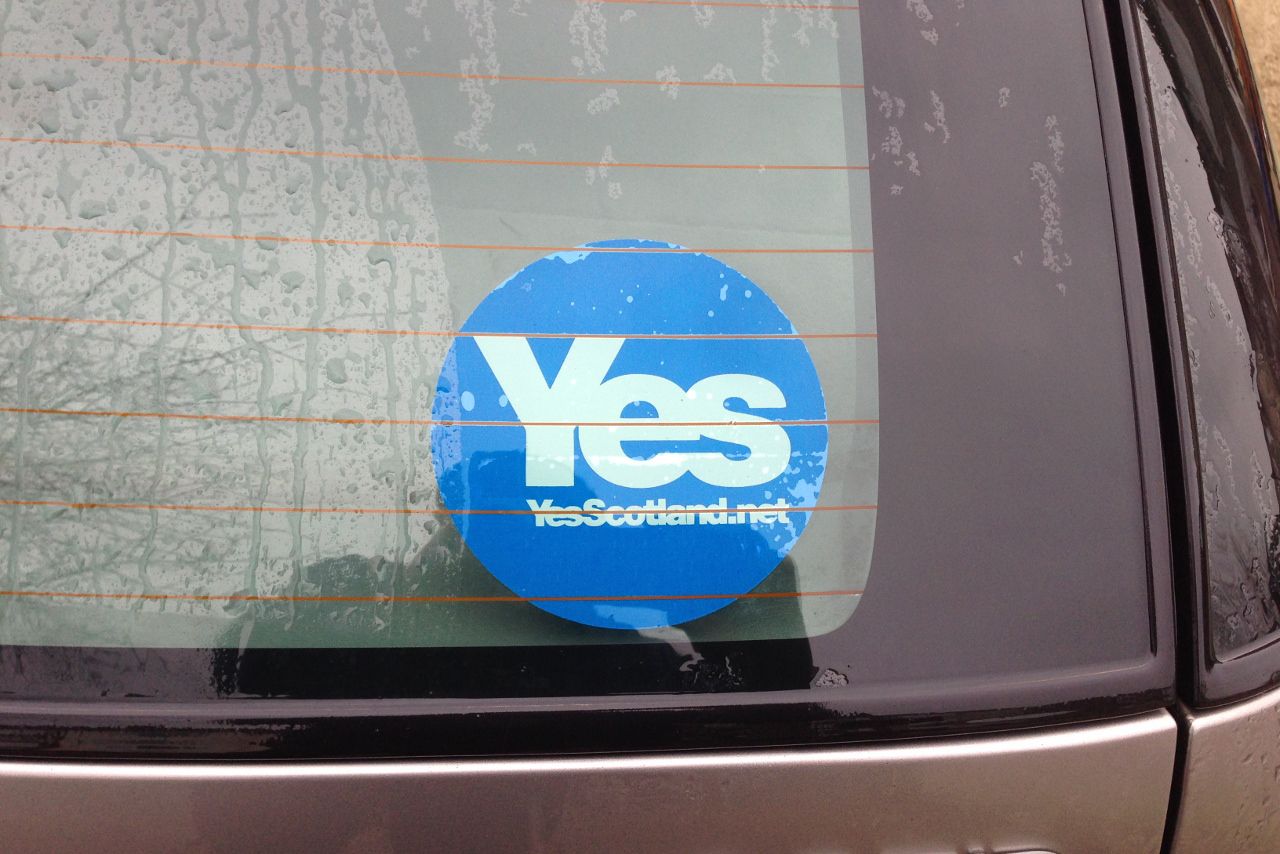 I’m not particularly political, I’m not a dyed in the wool nationalist and I’m not the kind of person who goes for bumper stickers. And yet I put this in the back window of my car:

Yes, it’s the independence referendum, possibly the most terrifying thing to happen in Scotland since The Krankies came out as swingers.

Like many Scots, I’m neither a Saltire-swirling SNP supporter nor a Union Jack-saluting unionist. I was born here but my family is English, Irish and Welsh; I see myself as a Scottish Brit, a British Scot, that guy with the weird accent.

Maybe the accent is why some people have been surprised that I’m in the Yes camp, or maybe it’s because I’m so middle-class I’m bordering on cliche.

One of the most worrying reactions to the sticker, though, is this: “I hope you don’t get your window panned in.” It isn’t impossible: there’s a level of anger around some parts of the debate that’s really quite frightening and some car windows have indeed been panned in (albeit not many, and only cars parked near big football matches).

A caller to Radio Scotland put it very well this morning: “There’s much more heat than light”. There are very vocal and very angry people on both sides, with unionists shouting down the nationalists, nationalists shouting down the unionists, and both sides demanding silence or boycotts for anyone expressing an opinion they disapprove of. The official campaigns spout absolute bollocks – overly optimistic bollocks on the Yes side and made-up negative bollocks on the No side – and televised debates become pointless shouting matches.

The media doesn’t help. Traditional media is largely unionist. It characterises anything vaguely negative as a personal blow for Alex Salmond, as if the whole independence campaign is about making him the first King Eck of Scotland. It plays down any positive news for the Yes campaign, consistently smears pro-Yes campaigners as online abusers, repeats every gormless anti-Yes utterance by sun-baked tax exiles who haven’t lived here since the 1970s and seems unwilling or unable to compare the current crop of scare stories with the ones we were fed before the last devolution referendum and the one before that.

Online media is largely pro-independent, often smug, and frequently characterises the Union as entirely Tory – or it runs apparently serious pieces about how we’re being oppressed by the BBC’s 3D weather maps (although there are exceptions, such as Rev Stuart Campbell’s gleefully partisan and scrupulously documented Wings Over Scotland. You might disagree with the Rev’s conclusions, but at least he backs his arguments up with evidence).

It’s all noise, and it’s drowning out what the referendum is really about.

If we let this get party political – if we let it become Alex Salmond vs George Osborne, if Yes becomes synonymous with the SNP and No the Tories – then we’ll lose sight of the big picture. If we do that we might make a long term decision based on things that really won’t matter in the long term. Fifty years on, who’ll care what anyone thought of Nicola Sturgeon or Alastair Darling?

September’s vote isn’t about which political party you prefer. It’s about how we keep the bastards honest.  Those bastards might be SNP, or Labour, or Green, or Conservative. It doesn’t matter. We’re being asked to choose a system, not a party.

One of the most dangerous ideas that’s gained currency – and it’s an idea that the No campaign is really pushing – is the idea that a Yes vote is a vote for the SNP. It isn’t. Independence could turn out to be the best thing that ever happened to Labour in Scotland, to the Greens, even to the Conservative party: a reborn Scottish Conservative party, one that has more in common with the long tradition of small-c conservatism than the UK party, could one day have more MPs than Scotland has pandas.

I’m voting Yes because I believe that the current electoral system is broken, too weighted towards London.

The UK is largely governed by, and governed for, the South-East of England – a part of the country that’s economically, socially and politically different to Scotland. That part of the country has one third of the UK population while Scotland has less than one tenth, so it doesn’t really matter who we vote for or against: it’s the South-East that decides who gets in.

You can demonstrate the problem with just one of Tony Benn’s famous questions for politicians: How do we get rid of you?

For Scotland, the answer is that we can’t.  If we believe that the party  or coalition in power isn’t acting in our best interests, we’re powerless to change it. We have to wait until they piss off the rest of the UK and the South-East in particular.

We voted identically in the last two general elections, with completely different results (with some irony the same Alex Salmond who’s often compared to a dictator by the media is the only party leader with a mandate here: his government won a majority, unlike the Conservatives and Lib Dems). The results were different in the last election because England voted differently.

Hence Yes: I believe that if Scotland is its own country, it’ll have a more representative democracy. We can answer Tony Benn’s question by pointing to the ballot box: if we elect a bunch of numpties we can boot them out without having to persuade millions of people in England first.  We simply don’t have that power under the current arrangement.

That’s what we need to think about, and it’d be helpful if everybody stopped shouting.

1) There are reasonable arguments for both sides. Most Yes voters have their private doubts as do No voters. The fruitful debate emerges when we share those doubts, not when we pretend to certainty.

2) Try to stay future focused. We can’t ignore the past but lets not dwell on it. This is the 21st century. Surely on behalf of our children surely we can imagine what might be best for them, and not get bogged down in a hundred quid in tax here or there, or whatever economic argument happens to suit your side politically right now.

3) Whichever way this vote goes it’s going to be close and we’re all going to have to live together in the same country afterwards. It will do no good if this debate is characterised by contempt or name calling. There’s no value in building up a new us and them, or fomenting new grudges. If either side feels defeated or humiliated in 2014 we will all be storing up serious trouble for the future.

I particularly agree with this bit:

The things which matter to me – a sustainable future for my kids; a compassionate political system, the best education, health and economic opportunity for every citizen, imaginative and flexible policy-making, stronger communities, progressive tax… It seems to me that all these things are much more likely to be realised in an independent Scotland than they are within the United Kingdom as it currently stands.

But if the Unionists can put forward a more positive proposal I’m genuinely open to changing my mind.

Here’s hoping we can work it all out without any more windows getting panned in. Especially mine.