Their embassies are expanding. Almost 100 years after independence the current generation of Irish politicians are more convinced than ever of the significance of Ireland’s role in the world. That may sound strange to British ears, who are used to seeing policy of war and peace through a different lens which skips over Dublin between London and Washington.

Away from the obsession of size and power, the Irish have constructed their own model, fitting snuggly within the international community. Through a multitude of strategies, Ireland is global. During the current government review of policy the focus is on expansion and improvement – how to look to emerging markets and horizons.

From rebellion to statehood

Like many medium sized nations, Ireland has come a long way in a relatively short period of time. The old vanguard of the British military state was ripped down in 1922. The new Irish military structures emerged within a divisive blur of the civil war. The culture that established the Irish Volunteers and IRA was anti-colonial and, ironically in some ways, anti-militaristic. A military was established amid extreme social fatigue: where the slaughter of World War I was mired in the daily brutality of occupation, civil war, violence and disorder.

This experience party defined Ireland as a ‘neutral’ state which distanced itself from intervention. So Ireland said ‘No’ to fighting in World War II, ‘No’ to NATO membership, ‘No’ to the many subsequent conflicts where squaddies from Dundee to Liverpool fought and died with depressing regularity. Ireland took a different path.

The Irish Defence Force has honoured the declaration of the UN Charter, which states:

“We the people of the United Nations determined to save succeeding generations from the scourge of war, which twice in our lifetimes has brought untold sorrow to mankind”.

On that basis generations of Irish soldiers have carried out United Nations peacekeeping missions across the world. There are currently 410 Irish service personnel deployed, including 176 in Lebanon and 130 in Syria.

Key peacekeeping operations have been in Lebanon, where 30,000 Irish soldiers served between 1978 and 2001; the 9,000 soldiers who have served in Cyrus since 1964; and the 6,000 soldiers who served in Congo between 1960 and 1964. The later case involved the most tragic loss of life in Ireland’s military history, with 26 fatalities.

Beyond these responsibilities, Ireland’s world has been defined by soft power ambitions. Trade, diplomacy and cooperation have coalesced.

‘The world has never been safer for countries like Ireland’

Professor Ben Tonra, of University College Dublin, writes that this is the result of unprecedented security for Ireland within an international system of law, norms and institutions. “Never before have small states like Ireland had it so good”, he says.

This reflects the findings of Scotland’s Jimmy Reid Foundation report ‘No need to be afraid’ which also highlighted the strategic positioning of the North-West Atlantic for its security benefits.

For a nation that has no desire for conquest and no need for defence, that shapes a new form of foreign policy. In the modern review of Ireland’s approach, a renewal of diplomacy, communication, culture and reconciliation dominates the agenda.

On this basis he identifies 6 priorities for Ireland’s future contribution to the world: 1) to lead in communication technologies through virtual embassies and networks; 2) an expansion of the physical diplomatic network; 3) utilising Ireland’s strengths in diaspora links and expertise; 4) pursuing the EU ‘External Action Service’ for diplomacy; 5) continue the “serious, substantial and significant” commitment to peacekeeping and military peace support operations; and 6) reinforcing “invaluable” moral leadership in aid, rights, reconciliation and disarmament.

Even in strained financial circumstances, the focus is on looking outwards and maintaining contributions. 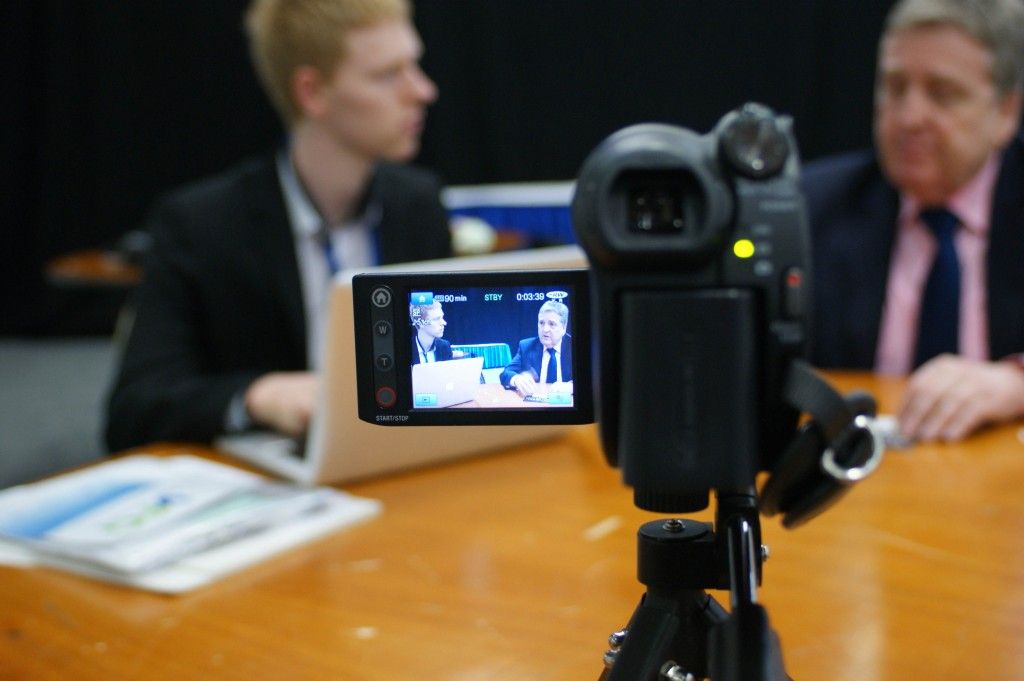 I interview Pat Breen TD, the current chair of Ireland’s Foreign Affairs Committee, on Ireland’s role, future and lessons for an independent Scotland. It is the final topic which creates a rhetorical tightrope, and the need for diplomacy from the government official.

“If we’re an example for other countries, then let other countries look at our record. They can use our example. We have done extremely well on the international stage”, says Breen.

“There should be stronger cooperation between Scotland and Ireland”, he says at the end of the interview. But on the benefits of independence he sticks firmly to Ireland’s position of neutrality: “We obviously feel that we’re going to stay neutral.” I ask how Ireland would approach a new independent nation to its North. “We’ll deal with it the same way we deal with the UK at present”, he responds.

“Since the current government took office, we put the trade remit into the foreign office. We have a small network of embassies compared to other countries. But recent announcements looking at expanding our embassy network are crucial, especially to the Asian market.”

Ireland plans to open trade embassies in Indonesia, Thailand and Hong Kong. The interview, which takes place near Saint Patrick’s Day, is on the eve of Ireland’s annual take-over of the White House, when Ireland’s image (and associated goods and services) are visible to the world.

The drive for markets is matched by moral priorities shaped from Ireland’s role as mediator and peacemaker. I raise the desire for disarmament of Trident from Faslane and reform of international arms markets, and the view of Professor Alyson Bailes that Scotland could learn from Ireland in this regard.

“We’ve been there from the start”, Mr Breen said. “The trade arms agreement has come into place and we’ve been a strong supporter of nuclear disarmament.”

This is the “example for other countries” – particularly Scotland, where the future of nuclear weapons sits at the heart of the referendum.

Lessons in how wider foreign policy is constructed can also be taken from Ireland. The model in Dublin is softer and cheaper than the structure found in Denmark or the UK. Military spending is replaced with a focus on social issues and multilateral contributions. For many in Scotland, this model may appear more attractive than the NATO alternatives.

The 2014 Irish budget spent €890 million on defence, alongside €693 million on foreign affairs and trade. This comprises 9,400 active soldiers and 5,200 reservists. The Irish Air Corps comprises 6 utility helipocters, 7 turboprop aircraft, 2 eurocopter helicopters and auxiliary aircraft. The Naval Service has 8 offshore patrol vessels, primarily for coverage of Ireland’s territorial waters on the EU boundary. 2 further vessels have been commissioned. Fittingly, for the Irish Defence forces, they’re named after writers Samuel Beckett and James Joyce. The pen takes prominence over the sword within Irish foreign policy.

One further influence of this temperance is the guiding force of the European Union. The Ukraine crisis raging across the continent, reinforced an atmosphere of necessary Europeanism in Dublin. What was needed was a greater unity of purpose and unity of response – more union not less.

For Breen, the EU defines Ireland’s internationalism. “I take you back to when we weren’t a member of the EU. We were a very small country. Our people weren’t as well off as we are now. We were very dependent on trade on the UK. Since we became members we’re opened up big trading links with other countries.”

And this, naturally, has been mirrored in many of the hard power scenarios of foreign policy. “Our Foreign Policy is very much part of the European Union. We have our own ideas, particularly in relation to Palestine where we have supported the Palestinians as much as possible.”

That interdependence is reflected in Breen’s views of the UK. While polite and stand-offish on the Scottish referendum, these factors create a rare Irish interventionist streak when it comes to the potential UK-EU referendum.

“I don’t see any reasons why the UK should leave”, states Breen categorically.

It is not only Irish politicians that will look at May’s UKIP surge in England with trepidation. Scottish voters, too, now see their place in the world change in a reflection of new identities and roles.

If the EU result sets eyes in Scotland towards how Denmark, Norway, Sweden, Iceland and Ireland conduct their affairs, then it will be be the ultimate rejection of skeptic introspection.

In this one case, Ireland’s foreign policy is an exemplar of how a nation like Scotland can be international. There are lessons of history, lessons of reform, lessons from Europe. Ireland is changing for a changing world. It priorities trade, yet it also takes human rights, disarmament and peacekeeping seriously and takes appropriate responsibility for them. While Denmark has been the model of choice in some Scottish circles, Ireland demonstrates that there is a softer, neutral and cheaper way to shape foreign policy. Those who seek such a Scotland would do well to consider its benefits and its pitfalls in the years ahead.