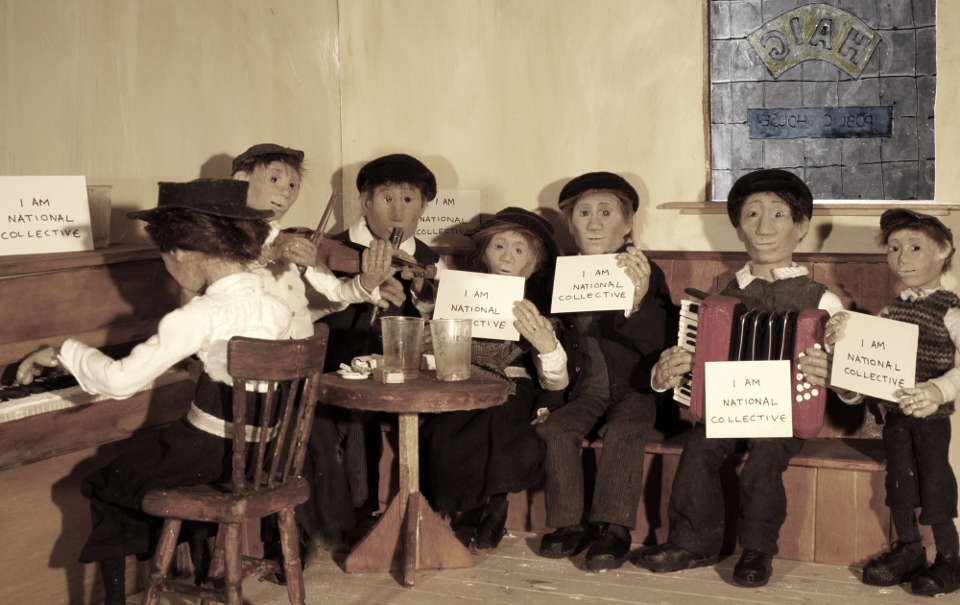 “I think Claire’s playing the bagpipes in the corner”

This was said as gentle, symbolic slander of me, in a pub discussion, during the campaign for devolution by my fellow leftie pals. They did concede, I was probably playing the Internationale. To campaign around what was happening in our divisive, border-bound political system was seen by many on the left as taking the focus away from the real issues at hand.

Times change. Scottish Independence is embraced by much of the left as a valid and important outcome to be fought for.

The other thing that’s changed is that I don’t often get to hang out in pubs having political discussions any more.

Mostly I spend long hours in a cupboard, in the dark.

I hang out there with animation puppets and try to bring stories to life.

When I was making a film with National Mining Museum Scotland, it wasn’t fear of the impossible task of making 2000 puppets that stopped me making a full work-force of tiny miners; when I made a film with Fife cultural Trust about WWI it wasn’t the limited size of my studio cupboard that stopped me making a full battlefield set. It was because I feel that for a voice to be heard and for sense to be made of someone’s experiences you need to hear that wee voice without the clamour and noise of everything else diluting what wisdom and insight that one story has to offer.

Now there’s obviously 5 million folk in Scotland (and more than a few puppets). That’s a lot of wee voices with stories to share. But it’s 58 million less than Britain. Those 58 million all have their own tales which is why my hope is that independence inspires more devolution elsewhere. Meantime, here, we’re listening and engaging and questioning each other now more than we have for a long time. We’ve a creative and collaborative path ahead but we’re limbering up for a monumental, transformative sharing of tales and learning.

If I shot all my scenes from the back wall of my cupboard so the puppets were just far away specks on the cinema screen the film wouldn’t work. It’s all happening too far away. At that distance you might see what was happening but it would be hard to feel anything emotionally for the characters. You need to be up close to empathise. You need to see into their eyes to connect. Once the feeling’s captured in camera, though, it can travel the world.

I want Scotland itself to have a wee wise voice in the world. I want us to both listen to others while, at the same time, claiming that voice. Then we will have a new story to share about what it means to be a country.

Editors Note: Claire works as an animator and has recently made a film called ‘Sea Front’, with Karine Polwart co-ordinating and scoring the music. The trailer is available below: