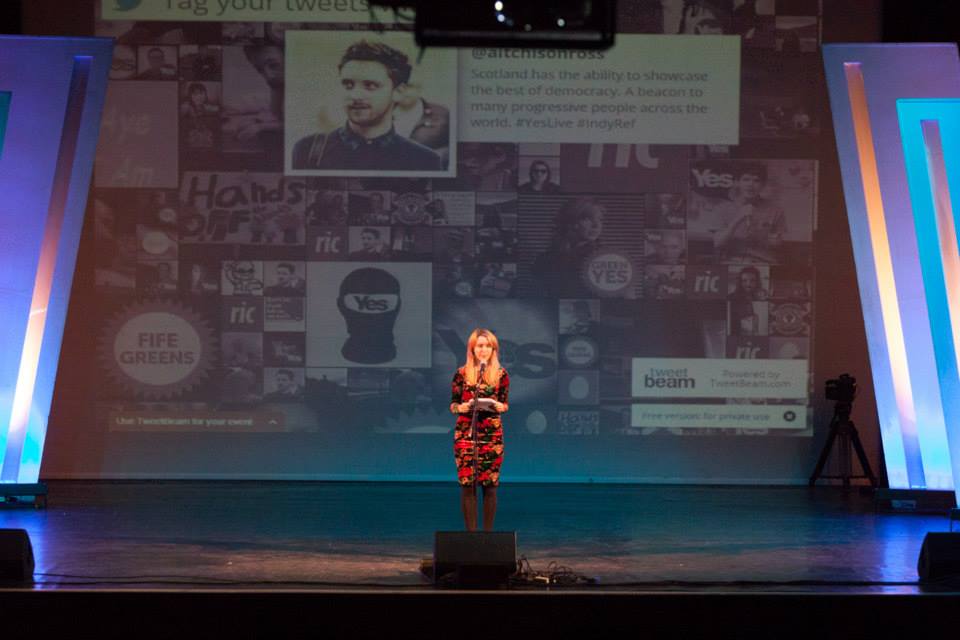 Before I speak about a journey to Yes, I want to start with a poem. I believe that our culture has been boiled down, simplified, overlooked and deliberately forgotten. Instead, our opposition have narrowed the debate to pose the question, do you think you’re Scottish, or British, or Both. This is synonymous with an ongoing trend to pigeon hole our assorted cultures into one, jargon-filled, meaningless sentence, “I’m proud to be British and I’m proud to be Scottish”, shared British values. For me, their portrayal of what it means to be British or Scottish or both doesn’t acknowledge cultural diversity, let alone celebrate it.

This is a poem in Shetland dialect by my talented friend, and fellow NC enthusiast Roseanne Watt, and it’s about the importance of language, and about celebrating wherever it is that you come from, and holding close the cultural distinctions that come with that. So to begin with, here’s a peerie bit of Shetland:

So I was asked to speak today about my Journey to Yes, but my journey isn’t all that interesting, so I want to do something slightly different and give my Mum’s journey to Yes through my eyes, because watching her journey has been so inspiring and uplifting, and has left me so proud of her.

Every member of my Mum’s family are working class. Growing up in Fergusley Park in Paisley, she saw how poverty could completely rid entire communities of opportunity. Perhaps most importantly, like most working class families, my Mum’s family were Labour through and though.

During her student years, she could be found at anti-poll tax demonstrations, protesting against the closure of Linwood’s car factories where my Granny and Papa met, or handing out homemade flyers in front of army recruitment vans that were strategically parked outside of job centres, persuading unemployed members of the community to join protests instead of the army as part of the Right To Work movement. She proudly recalls being arrested at the age of 18 for selling socialist newspapers, headlined “stuff the royal wedding, we want jobs.” Anti-Thatcherism runs at the heart of my Mum’s philosophy.

Fast-forward 10 years, and I vividly recall the day that Labour won the 1997 general election. I don’t recall this for political reasons. Being six years old at the time, I remember May the 1st of 1997 because my Mam, a woman who ordinarily enforced a rigorous sweetie-day rule and would repeatedly try to pass off raisins as an acceptable pudding, voluntarily gave me ice cream for breakfast. Not just any ice cream, chocolate ice cream. This along with the makeshift flag assembled in our garden – comprising of an old broomstick propping up Mam’s red dress – was how my six year old self realised that this was most definitely a significant day.

Throughout the Tory years of the 1990s, with a Mam in full-time education, we got by on social security. As you can imagine, the Tories were far from kind to us – alas, compassion never was their forte. So aside from the ice cream and home-crafted flags, I remember a distinct triumphant energy bubbling to the surface, one that I now associate with collective optimism for meaningful social change.

My next memory of participating in politics was marching against the Iraq invasion at eleven years old. By this point, Mam was no longer a member of the Labour party. Speeches that scapegoated single parent families, along with the first major waves of privatization to hit our NHS, had all proved TO BE a bit much. She didn’t vote Labour in the following election. I don’t know whom she voted for. I don’t ask. It wouldn’t have been a proud vote. I presume it was one of those votes that my generation will find painfully familiar – the ‘which one do we dislike the least?’ vote, or even the ‘which one will keep out the those we dislike the most?’ vote.

Fast forward another 10 years, and I’m phoning home from my flat in Stirling,

My Mam is extremely stubborn – as am I – so that conversation was the first of many. Many long, drawn out, animosity-laden conversations about leaving the rest of the UK left to perish under eternal Tory rule; about the fear of what Nationalism means; about the role of Labour in creating progressive change.

A wee while later, I got a call. It wasn’t to say that Mam had changed her mind, but she mentioned an interesting article written by somebody from the north of England that had put her fears of abandoning the left wing of the rest of the UK to rest. There. That it was. She was thinking.

Then another. This time to say that she was torn. She recognized that Yes was about much more than the SNP, but not voting Labour was hard enough, let alone voting for what she had associated for so long as an SNP agenda, an agenda that my granny and papa have hailed a Tartan Tory one.

Then another call, this time about devolution. About how Scotland has already changed. About how the UK’s cowardly response to Gaza had demonstrated that. About how devolution had allowed to lay the foundation for something new.

The next call was just after Mum’s first WFI meeting, which she described as “magical”. She described the connection you feel with other people. She described women speaking about their lives, their JTY, and the connection between everyone being so palpaple. Women from all backgrounds, sharing this experience. A meeting space very different from the barking, shouty, male-dominated political sphere. How you feel hasn’t changed, but finding this powerful connection, this common ground, is so mighty. WFI gave me Mum her voice back.

She compared the Yes movement to what it must have felt like to be part of Labour post-WWII. We have a chance to make a country again. My Mum still admires people in the Labour party, but they are no longer the influencial people in the party. TB was a result of Thatcherism. LP Neo-Thatcherist. A massive strength of the Yes movement is that it’s profoundly anti-Thatcher.

I called Mam yesterday and asked what Yes meant to her. I’ll finish with her response:

“Where’s the hope? Where’s the future for my children and all of our children in Britain? Westminster is a class-ridden, disgraceful vision of hope. It’s entirely unattainable for us. It’s also a very narrow view of success, but it’s not how I see success. It’s time to break away and build a different society! This is about deciding not to play a class game. The Yes movement is about challenging our allotted place and creating new opportunities in a society based on social justice for all.

The Labour party left me, I didn’t leave them. I was abandoned by the Labour Party. Yet it took me a long time to recognize a simple truth: the Yes movement is home to me, my world view and my hopes.

It speaks to my past and my future in a more profound way than Labour ever did. It’s a popular revolution, full of hope, connecting and involving real people, ordinary people, working class people, trade unions, women’s groups, environmentalists, the marginalized and forgotten.

We’ve all found a voice, a common language, and that’s very powerful. It seems to me that every community is involved in the Yes movement with common hopes and aspirations. I believe a different Scotland is real, likely and within grasp. There’s been nothing like the Yes movement in my lifetime, and it’s beautiful and inspiring – it even reaches out and motivates people who had given up. When you get that enormous wave of popular activism, of people all over Scotland in wee halls, pubs, bus stops and grand gatherings sharing their hopes for a fairer future, a safer world, a more equal society  – well, that momentum is unstoppable. It’s fuelled by the energy of shared hopes and dreams and a gritty determination to build a better society. Whether you’re in a council estate in the central belt, a village in the Borders or a croft in Shetland, the campaign for independence is speaking for and to us all, in a mixture of accents & in a shared vocabulary that’s radical, that’s hopeful. Yes has given us a voice and it’s getting louder every day. It’s the stuff of dreams, rooted in the ground, springing up like new growth. It’s unstoppable.”