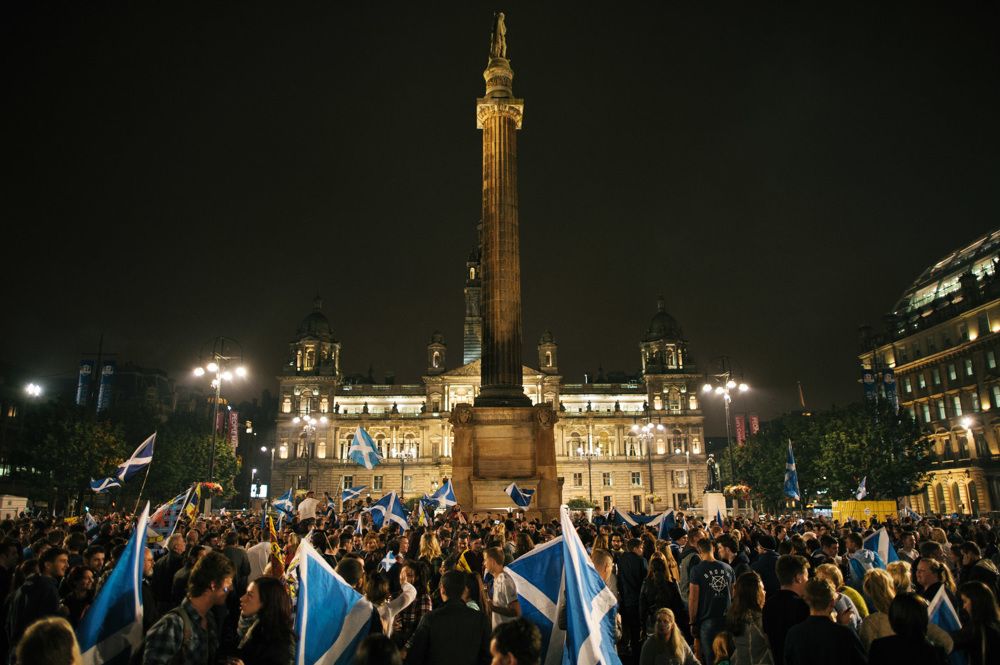 For many, 2014 will be remembered for little that is astonishing or newsworthy. Instead a year may or may not be recalled based on the standard meat of what is news for most of us. Break-ups, work, routine, choices; the everyday struggles and hopes that inevitably prove definitive over time.

Such things are far more important for the vast majority of human beings in Scotland (and across the globe) than the compass of their constitutional status. The nature of an individual’s political community rarely registers as anything other than a muted echo. We participate fleetingly, complain often and attempt an ongoing situating of our selves into the broader scheme of things.

In truth my own, relatively politicised, life has been similar. It’s consisted more of loose engagement: views held, yes. A strong sense that power should be held as close to home as possible. A visceral identification with working class politics, certainly. If 2014 has done nothing other than take that sense of distant affinity and turn it into one of participation and action, then, for me at least, it lives up to the hype with which it was brought in. The impact of all that happened to so many over the past year is something that we can only guess at today. We can however state the following with some certainty: though this year in Scotland registered in the acutely parochial realm of the personal it also reached out to encompass matters of global significance.

We have learned, or perhaps rediscovered, our own audacity. Here I sit reviewing the year, as though I have some kind of editorial authority to do so. I do not. And nor do I receive any compensation for the act, beyond the reward of recognition, the compulsion and thrill of a wider understanding. Such freedom does, however, allow for both excess and bluntness, finding your voice can all too easily mean shouting too loudly. Hence the following, humble, thoughts.

2014 changed me. In this year like all others the perennial challenges listed above have not been absent. Yet nothing has altered me so acutely and brought out such a vast prospect for self-education and, indeed, self-realisation, as this great democratic reawakening. All of this is of course dwarfed by the inspiration that can only stem from witnessing the transformation of others. To rediscover joy at the capacity of one’s fellows is to see the intertwined nature of individual and collective freedom take form. Perhaps that is what so many of us experienced this past summer.

That there were no sunlit uplands to ascend this time is sad, no doubt. Save for this: a far greater, more damaging loss would have been the task of birthing a country with anything other than the most solid majority for independence. We know, being pragmatic, that independence was only ever one step on a long journey, it was never an end in itself. Indeed as a great English radical once said of another struggle for self-determination: what we obtain too cheap, we esteem too lightly. This more complex path is only a guarantee that a tangibly better Scotland must be more profound in its realisation.

A lingering dose of youthful recklessness (the age old delusion that the world in a fresh pair of hands is plastic) may well be to blame for such optimism. And yet at its best 2014 was not simply a summer of love: a framed image of utopian proportions. It was all premised on excitement at the sight of political alternatives, on what was possible. That those of all ages become filled with passions about relatively moderate reform tells a different story to that of congealed youth. Deeper roots anchored what independence might mean: old visions of a just republic, newer forms of radical freedom that embed the change they want to see in the practices of the movement itself.

For despite all those tears of outrage shed by the generations of Scots who have marched against Trident, the Poll Tax, Iraq and a slew of other less famous but equally galling injustices, something has been at work in the land. It drew on a sustained, irrevocable, sense of dissonance. Westminster was not the repressor, it simply sang a different and ever more discordant strain. It still does. This awkward chorale to two different and rarely consolidated audiences will continue for some time. Such was the decision of a majority of the people of Scotland. But few now think that music to be sacred any longer. It will change because the union has become a solely political problem. And politics is, fundamentally, about change.

Out of all this there is something that I hope has become apparent. Action, agency and a slightly illicit sense of power have become common to us on a personal and collective level. Not on some arcane theoretical canvas but here in this very real Scotland. Like many who are now alive with this very different and altered sense of political energy, I am acutely aware of the difficulties this brings, the vast scope of potential disillusionment looms like an ever present lodestone: a constant, somewhat awkward negotiation around the contours of what all this might actually mean. Here in in this country, now.

But the truth is, the movement that Scotland experienced is only particular to the nation in a rather old fashioned sense. As in the 1960s there’s a roch wind gathering force, not just in Scotland, but in the great glen of the world too.

Should Scotland be an independent country? Many, many people think that it should not. Others dissent. It has always struck me as a very short question for a country that I could spend the rest of my years exploring and still struggle to understand: slight though it’s fate and its strangest places might be in the grand scheme of a world in which it still seems unsure of itself.

In contrast, this year, some politicians tried to resuscitate a soiled notion of patriotism: of glory, honour and sacrifice and hills and glens. But if there is a new burst of love for what is here, it does not feel like patriotism, it’s more a particular form of solidarity, of place and community: ever present but seldom recognised. If 2014 witnessed a summer of love, it was far more a rekindling of an old flame than a passionate fling with a repressed identity.

Perhaps this is why throughout the referendum campaign, the sentiment Yes expressed rested somewhere between Hamish Henderson’s socialist anthem Freedom Come a Ye, and the more accessible verses of Dougie MacLean’s Caledonia. A song of radical internationalism and a song of coming home. Two sides of the same coin for a movement that drove towards the idea that we might yet be at home with freedom and our own place in the world.

In the meantime, we are all precarious in this new country, staring down from imagined heights with a kind of mad temerity that would make our ancestors blush. Although I suspect that many would enjoy a quiet chuckle at the sight of so many worthies flustered at the hurly burly of it all.

That said, we should also remember that public life in Scotland has always moved in fits and starts, lurching forward when great events, elections or referenda compel it to, before settling back down into the couthier rhythms of an awkward province. Since September this has not happened. The task for 2015 is to ensure that these past twelve months cannot be written off as an anomaly, that all the networked individuals and movements find ways of not reverting to older, more limiting patterns of thought and action. For the alternative is simply too discordant. It tells us that political difference is to be shunned and that we should come together to back a broken political system.

The creativity, the skill, the patience and openness displayed in abundance last summer has not gone away. Rather, like all surpluses, our current surfeit of political engagement is defined by the fact that we still don’t know what to do with it. The solution to how we apply it must be so much more than party political (and so much more than just a yes/no rut). It must create a new normal in which participation is not simply a management task, but at the crux of all of our, newly politicised, lives.

To inhabit a country often dismissed as parochial and marginal, as a centre of disputatious enlightened social engagement, is to embed the best of the past year and build on it. The coming years will bring massive existential challenges, in Scotland and across the world, we must meet them with the tools we have discovered, the patience, the discipline and the knowledge that our country now thrills with. When standing still is simply not an option this movement is the new reality that we must live. For to do so, even on a personal level, is an act of independence too.

See you on the other side.